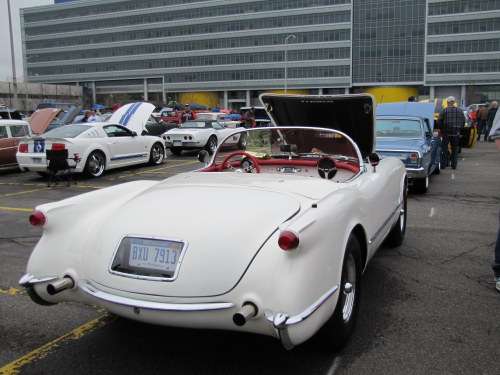 The Bearing Burners Auto Club outshined the sun behind the clouds once again at the 34th Car Show & Swap Meet on the grounds of the GM Tech Center in Warren, Michigan.
Advertisement

With over 40 classes being judged, awards were expected to be judged for Best Paint, Best Street Rod, Best GM, Best Ford and Best Mopar. In addition, there were plenty of give-a-ways, plus an upper and lower huge tool box raffle, a huge swap meet, food vendors and entertainment that included a DJ.

Adjacent on the grounds was a manufacturers’ midway, including a large used-car corral.

At last year’s event, the weather at first looked like it wasn’t going to accommodate. Then the rain went away, and the diehard auto enthusiasts who stayed went on with the show. Similar story with this year’s show.

Like every year, though, there are always two features to the Sunday event. One part is a largely a car part swap meet, where parts and cars are sold and traded. Some displays included aftermarket parts as well. The other segment of the show involves custom cars and trucks.

I did manage to speak with a few car owners. The first was Chuck Herkowitz from White Lake. He was kind enough to help me address where I could purchase portals from my HHR that were truly Chevy. You see, his 1958 Chevy had ports behind the rear wheels that were an option in that year. For the record, Chuck has owned his Chevy for 16 years.

The second interview was with Gene Goodrich. Fact is, it was my wife, Judi, who caught this 1954 white Corvette. She especially liked the rear taillights.

According to Gene, he has owned the car which he bought from a junk yard since 1964. While the paint was done in Imlay City, it was the engine that was different.

It was a Pontiac engine with tri-power, though, that led to the human interest story. When I asked Gene about that, he told of his good friend, Tom Stevens, who had the engine in a Studebaker. Tom is now passed away, but Gene remembered him enough to place his name on the car at the back of the hood. That’s heartfelt friendship, because I know how hard it is to lose a buddy. Thanks for sharing, Gene. Great story!

Here is my collection or medley of short video reports of the Bearing Burners Auto Show for Torque News..

That’s not all I have for you. Below this article, you will also find photos of some of the vehicles.

Unfortunately, my schedule today was such that I couldn’t stay til the end to report on the show winners. My hope was that Patrick Rall of TN might be there as well. If not, you can visit the Bearing Burners website. Just give them time to upload the winners. Either way, I’ll follow up with them and report again.