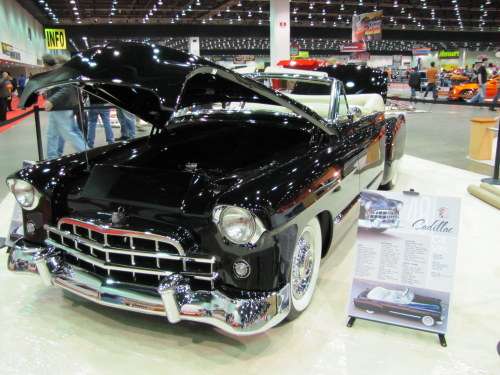 Aside from the traditonal hot rod Lincolns and custom Chrysler Imperials this year, the Cadillacs showed off as well at the Detroit Autorama 2011.

Some showed up in the Cavalcade of Customs display; others simply showed their metal elsewhere on the floor.

Bottom line here is that the hot rod and custom car crowd is well acquainted with the Cadillac tradition and the Cadillac image.

Cadillac was born in 1902, at the dawn of the twentieth century by its founder, Henry Leland. He was a master mechanic and entrepreneur, and named the company after his ancestor, Antoine de la Mothe Cadillac, born Antoine Laumet, the founder of Detroit.

If you ever get the opportunity to be invited to visit the GM Heritage Center in Sterling Heights, Michigan, you will not be disappointed.

Aside from all the other GM cars, Cadillac is well represented with vehicles that were the primo models of their day. I'll share those another time in a special gallery, dedicated to the GM Heritage Center.