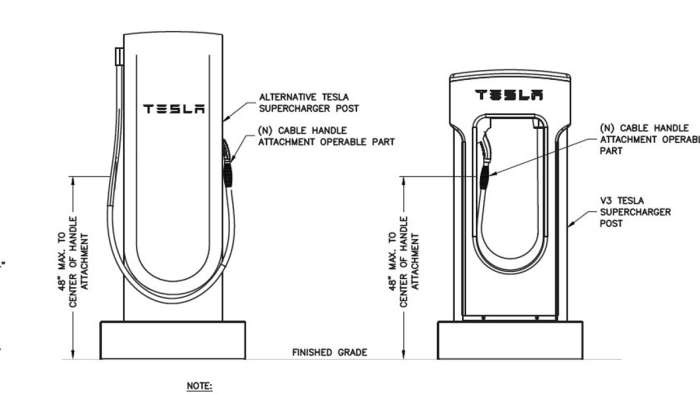 All these factors added together have made Tesla’s superchargers the fastest and most convenient means of charging an electric vehicle for a while. To this day, the latter still holds, however, with the emergence of new charging networks and EVs that can charge at more than 250KW, Tesla has lost its number 1 spot both for the fastest charging EVs and the highest-powered DC fast charger.

Currently, Electrify America & Ionity, both competing charging networks to Tesla’s superchargers, have DC fast chargers that can output as much as 350KW. And vehicles like the recently launched Lucid Air and the Porsche Taycan have max charging speeds as high as 300KW & 270KW respectively.

However, the world’s most valuable carmaker doesn’t seem like it will accept being seconds to anyone. Tesla and CEO Elon Musk had previously hinted at an upcoming max charging increase for Tesla vehicles.

For instance, speaking at the Cybertruck unveiling event back in 2019, Musk, even though held off from revealing the actual charging speed for the futuristic truck, has still unequivocally stated that the Cybertruck will have over 250KW charging capability.

Still, despite Tesla hinting at faster-charging speeds for a while, the supercharger speed has been capped at 250KW since 2019. Lucky for us, however, last week we got our first hint at the next generation V4 supercharger.

As you can see from the pictures above, as compared to the V2 and V3 superchargers, the V4 superchargers are noticeably taller, much thinner from side to side, and have about the same size and thickness.
@MarcoRPTesla’s schematics were good enough to whet our appetite but it still left a lot of questions unanswered. However, lucky for us, today we have gotten more detail regarding the V4 supercharger and the information comes from none other than Tesla.

Tesla’s drawings for the V4 supercharger were included in an application the EV maker submitted to construct a new supercharger site in Danvers, Massachusetts.

And in the application, Tesla puts 2 supercharger drawings side by side, with one being the already beautiful looking supercharger V3 which has an opening in the middle where the charging cable hangs.

However, next to it is also a drawing of a brand new supercharger that Tesla calls the “alternative supercharger post”. True to @MarcoRPTesla’s previous leaks the supercharger is indeed taller and thinner.

Tesla supercharger site plans for Danvers, MA appear to now include references to "Alternative Supercharger Posts" in addition to v3 posts. This is probably still a v3 build, but this suggests v4 sites are on the way

This time, however, we also see that Tesla has done away with the opening in the middle where the cables used to lie in previous versions of superchargers, and on the V4 supercharger, the cable is attached to the outer side of the supercharger.

Tesla has also updated the entire design for the V4 supercharger, and this brand new aesthetic resembles more of Tesla’s current Urban supercharger. The urban supercharger, if you happen to be unfamiliar, is a smaller and slower supercharger version capped at 72KW and is meant for garages in commercial builds and apartment complexes.

Up to now, this is our clearest look at Tesla’s V4 supercharger. However, beyond the drawings, we have yet to see a picture of a V4 supercharger in the wild. And more important than the aesthetics, we still don’t know what the max charging speed is for the new supercharger iteration and if it has other technological improvements.

However, we will be sure to keep you posted once we get more information regarding Tesla’s V4 superchargers. Until then, make sure to visit our site torquenews.com/Tesla regularly for the latest updates.

For more information check out: Tesla's Insane Demand and the Collapse of Legacy Auto