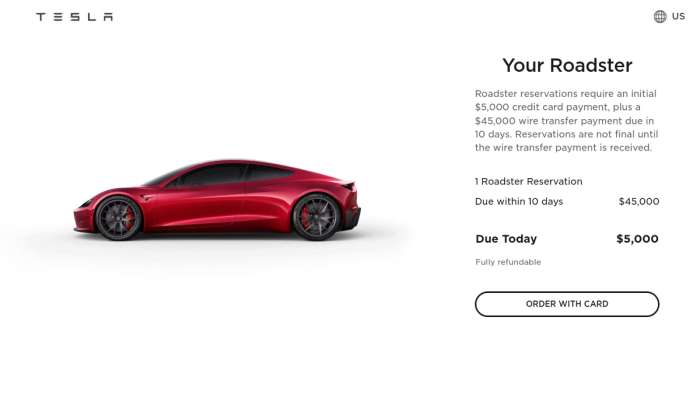 In an update to the company's online configurator, Tesla has removed all pricing information for the Roadster. This hints at an upcoming price increase. The EV maker has also sold out of the Founders Series Roadster after making $250 million from reservations.
Advertisement

Tesla announced the second generation Roadster together with the Tesla Semi back in 2017. Originally, the car was slated to begin production in 2020 however, after several delays, the vehicle is now expected to come out in 2023, six years after it was announced.

Given more than half a decade will have lapsed between the vehicle’s announcement and delivery, Tesla has had plenty of time to improve the already gorgeous aesthetics and insane specs of the vehicle.

According to a statement by Tesla CEO Elon Musk last year, the EV maker has already redesigned the second-generation Roadster. Musk says the vehicle will look even better than its already gorgeous design.

When Tesla announced the second-generation Roadster, the EV maker started accepting reservations for two versions of the vehicle. These were the “standard” Roadster and Founders Series Roadster. The Roadster starts at $200,000 without any options and the Founders Series started at $250,000.

Anyone interested in the Roadster could join the reservation queue by placing an order through Tesla’s online configurator.

However, individuals ordering the “regular” Roadster had to pay $5,000 at the time of reservation with $45,000 to be added within the next 10 days in order to keep their spot on the reservation list.

And those who opted for the Founders Series Roadster, which is limited to the first 1000 articles to be built, needed to pay $5,000 at the time of the order and pay the entire $250,000 price tag of the vehicle within 10 days.

That’s an incredible amount of money to be apart from for 6 years waiting for Tesla to begin production of the vehicle. Still, starting today, with an update to Tesla’s online configurator, it’s no longer possible to reserve the Founders Series Roadster.

This again is an incredible amount of money to make for a vehicle that isn’t even in production yet. In addition to stopping the Founders Series Roadster reservations, Tesla has also made other changes to the electric hypercars online order page.

Now when you go to order the “regular” Roadster, Tesla’s online configurator no longer shows the final price of the vehicle which as mentioned above used to be $200,000.

Considering how much inflation there has been and how much EV prices have risen since the Roadster was announced back in 2017, Tesla's decision to remove pricing most likely points towards a price increase.

However, given the vehicle’s stated specs and especially when compared to the prices of other hypercars the Roadster will still be a bargain even if Tesla doubled the price to $400,000.

As of now, it’s impossible to say what the final price for the Roadster will be. However, we will be sure to keep you updated if we get any information from Tesla. Until then make sure to visit our site torquenews/Tesla regularly for the latest updates.

So what do you think? Excited that Tesla was able to make $250 million just from Founders Series reservation holders? Also how much do you think Tesla will increase the Roadster’s price? Let me know your thoughts in the comments below.