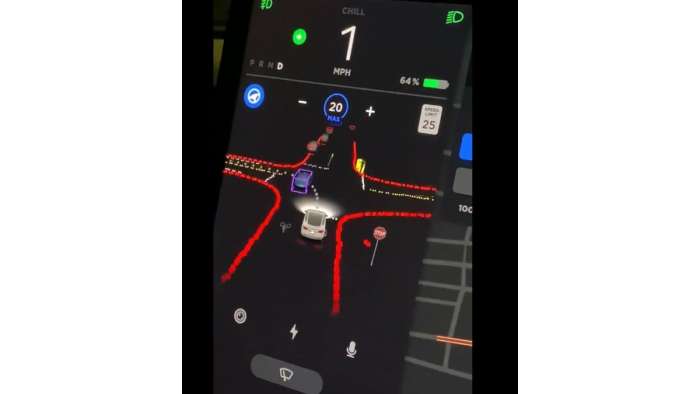 In this article, I'll describe the first look at Tesla's Full Self Driving software.
Advertisement

As we reported earlier this morning, several videos have been shared by beta users of Tesla rewritten full self driving software and they are impressive!

The new features added are turning left and right on city streets and navigating roundabouts. Not only do we get enhanced function, but we also get a substantially different visualization on the screen.

The user to show the new beta was Twitter user Brandonee916.

This is absolutely incredible what is coming with the FSD BETA! @Tesla gave me the OK to post this on social media. One day soon we will be having self driving cars... so excited to be part of this movement! ❤️ This is part of the development UI and not final release..sneak peek! pic.twitter.com/vSnkw1rFKa

In this picture, the purple lines look like they are lines showing oncoming traffic lanes and red lines showing the side of the road. The green, blue and purple boxes show cars the car is tracking in addition to the car directly in front of Brandon's car. It will take some time for the meaning of all this new information to be found.

.@elonmusk you mad man. You did it. Full self driving is here. Myself and @tesla_raj minds are blown. pic.twitter.com/BZqiQjzl7g

In this short video, you see Tesla Raj and the John of Tesla Owners Silicon Valley take their first right turn in a Tesla with the new software, They are shocked at the new visualization and are driving to Target. There are no lane lines, it navigates around parked cars, it puts the blinker on, it slows to make the turn, it hesitates to look for cars, and then made a perfect right turn and sped up to the speed limit. Mind-blowing to see this in a customer car, not some controlled demo!

This same clip and so much more are in this 10-minute video you are sure to want to watch over and over again until you believe it is real.

Now as we have come to expect, every time we get a major advance in the FSD software, Tesla announces a price increase. This time it is $2,000 rather than $1,000 and customers only have 4 days to lock in the old price.

Now that Tesla FSD beta is out in limited release, FSD price (new or upgrade) will go up by ~$2k on Monday

Now as we have come to expect, every time we get a major advance in the FSD software, Tesla announces a price increase. This time it is $2,000 rather than $1,000 and customers only have 4 days to lock in the old price. If you needed a reason to get you off the fence, this is the reason! I have 4 Tesla cars reserved (for my family) and I want full self-driving on all of them. Watch the videos and see if you want to want to get in on the technology before the price goes up on Monday.