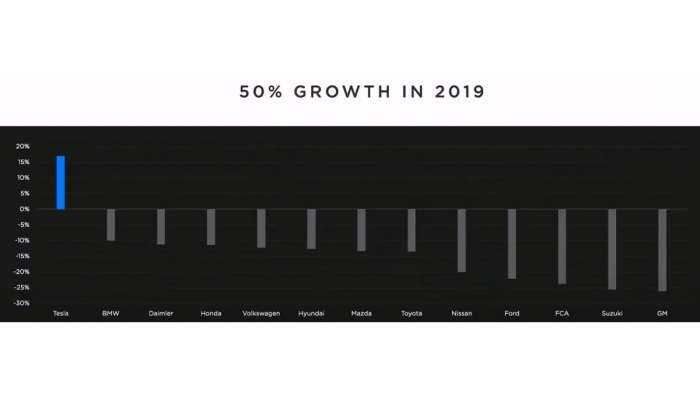 In this article, I'll explain how to listen to Tesla's third-quarter earnings call and why you would want to, even if you aren't a shareholder. You will learn what to expect from the call and how to find out what questions will be asked. I'll also mention the type of news you shouldn't expect to hear on this call and why not.
Advertisement

The Basics of the Call

Let’s start with the basics, the call will be at 2:30 Pacific time on October 21. If you want to listen to the call live, go to Tesla’s investor relations page and sign in to the webcast from here. I recommend you read the quarterly shareholder letter that always comes out about an hour before the call. If you want to know what changed between the last letter and this one, read last quarter's shareholder letter too. It's helpful to know that questions to expect and they survey a list of questions from both retail investors and institutional investors before this call. I've captured the questions most likely to be asked as pictures below. 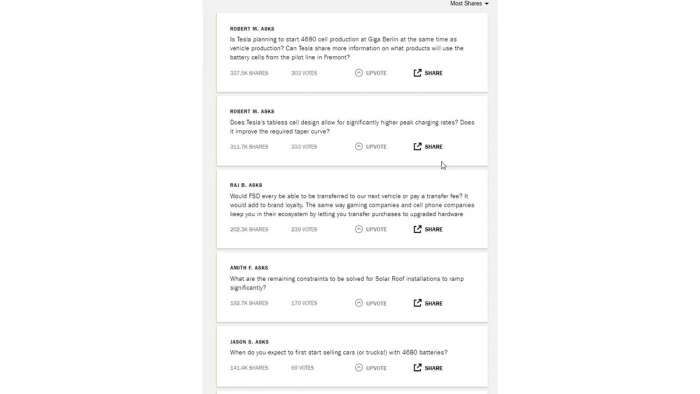 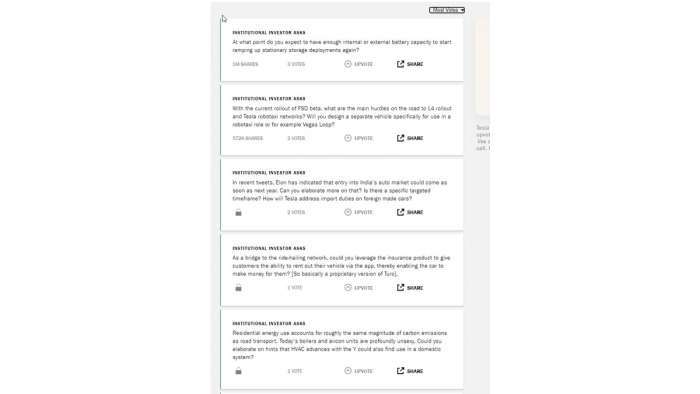 Why Non-Shareholders would listen to the call

Any event that has Elon Musk speaking live has a decent chance of being entertaining to Tesla fans and haters alike. Elon has been more reserved and controlled in recent calls, but you have to potential to learn many things about the company from the call. Not only do you hear the commentary and the questions and answers, but you can also tell a lot about how the company is doing by the tone of the call. If they are business-like and rushed, it is a bad sign for the current state of the business. If Elon and the other speakers sound relaxed and happy, it is a sign that things are going well. There is always the potential for the type of commentary you will never hear on any other earnings call, like the time that Elon called a wall street analyst's question boring and boneheaded. People interested in either the car industry or the environmental movement should be interested in following Tesla because they are the leading company setting the direction and pace of change in both of those areas.

What I expect to hear

I expect Tesla to reiterate that demand is strong and their primary problem is they just can't make enough batteries, cars, energy storage systems, and solar panels to satisfy demand. I think that is partially true, but I also think products (even products as exciting as Tesla's, with their over the air updates) get stale over time, and as we found last week, Tesla updates their products to improve their competitiveness before they start to seem too dated.

You notice that there are a lot of questions on batteries. I expect to get some additional info on Tesla's batteries, but not a lot. They just had a well-planned battery day and they released all the info they are comfortable sharing at this time. I think most of the questions they didn't answer (like "when should expect a million-mile battery?") were either not answered for competitive reasons or because they don't want to stall the sales of their current products.

Of course, you will hear a lot of boring financial details about margins, sales, and line items in the income statement that you don't care about if you just care about the company's products. An item that is always controversial is the dollar amount of regulatory credits Tesla gets from its competitors. Many countries or regions have emissions standards and many of them (especially Europe) allow companies to sell credits if they sell more electric cars and less gas and diesel cars than required (since Tesla doesn't sell any gas or diesel cars, they always have credits to sell).

What I'd love to hear, but don't expect

I'd love to hear when Tesla plans to lower prices or update features in their cars, but Tesla has learned that if they talk about changes in their product that are coming soon, that could cause owners to delay their purchases until the cool new feature comes out. The exception to that is software features since those can just be downloaded to existing cars. I expect Elon to promote Tesla's progress on full self-driving and to encourage people to buy the feature now before it is complete because they will keep raising the prices as they release new features.

Another item I'd love to hear about is whether they are looking in China or outside of China to build their next factory in Asia. I think they have already picked the location and are finalizing the negotiations. They may say they are looking for a location, but they don't want to say they have selected the location because they want to give the government they are negotiating with the impression that if they don't offer Tesla a great package of incentives, that Tesla is ready to build their next gigafactory somewhere else.

Tesla will release some precise volumes and costs in the shareholder letter before the call, but they usually won't give any greater detail in the call, just an explanation of the detail in the letter. So questions such as "what is the cost to make a battery?" are unlikely to get a direct answer due to Tesla not wanting competitors to know how advanced their technology is or isn't.

Whether you listen to the call live or wait for us at TorqueNews to summarize the highlights for you, tomorrow's announcement and the call should be both exciting and informative to both Tesla's fans and detractors.