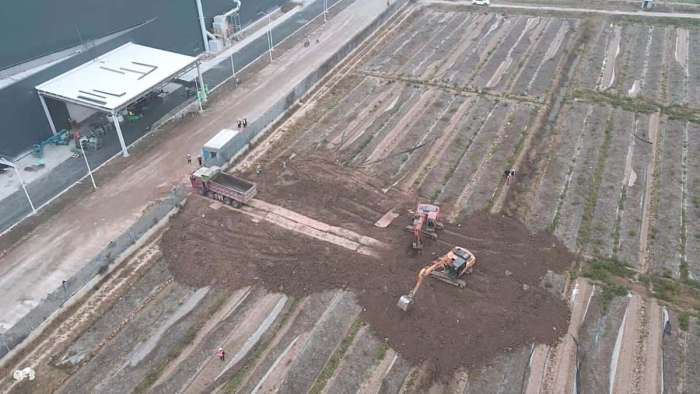 Tesla has started huge new activity in the eastern side of its Giga Shanghai factory. Single-piece casts are spotted outside suggested refreshed and redesigned Model 3 and Model Y from Tesla China.
Advertisement

Tesla appears to work on Phase 3 expansion in Giga Shanghai as its clearing more land, and the single-piece casts are spotted outside the building, hinting refreshed Model Y and Model 3.

Do you remember one of our previous videos in which we showed camouflaged Tesla models outside the Gigafactory Shanghai? That was recently, in November and you can watch that video report below.

I think, now we may have an explanation. The single-piece casts that are spotted by our friend Wuwa outside the Giga Shanghai factory, hint that Model Y and Model 3 refreshes are coming.

Our friend and drone operator Wuwa recently posted a new Giga Shanghai Video showing an eastward expansion, new activities going on in the Eastern section of Giga Shanghai. Simon Alvarez from Teslarati concludes that this can either be Giga Shanghai's potential new "Phase 3" area or possibly even a Supercharger or cell manufacturing facility.

We don't know yet and the next couple of days and will probably clear the question. However, what is equally interesting is Tesla’s “Giga Press” machines in Gigafactory Shanghai appear to be operational, at least to some degree. As you can see from Wuwa's recent video footage, several single-piece castings for what seems to be the Made-in-China Model Y have been spotted around the facility’s grounds.

"The fact that Tesla seems to be testing its China plant’s Giga Press machines bodes well for the all-electric crossover’s domestic ramp, as it suggests that even early production units of the Giga Shanghai-produced Model Y may utilize single-piece casted parts," writes Alvarez.

Single-piece casts are going to be key design elements for new refreshed Tesla vehicles. Tesla has announced that it will abandon hundreds of Kuka robotic arms in its various Gigafactories replacing them with single-piece casting machines called Giga Presses. In fact, eight Giga Presses are coming to Giga Berlin and Fremont also has one, but we don't know if the Giga casting machine at the Tesla Fremont factory is operational yet.