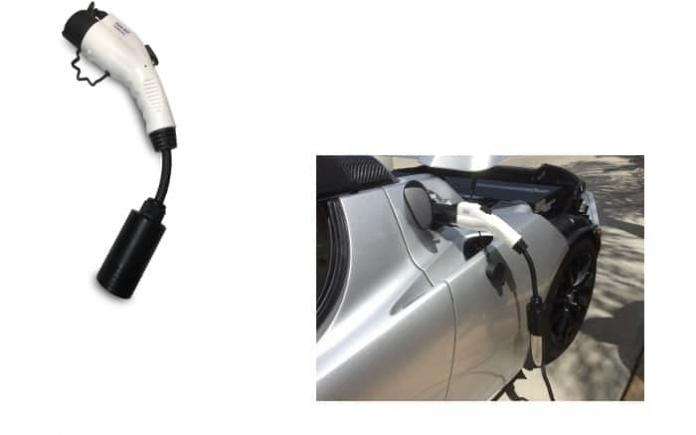 Recently there were lots of mentions in the media that Tesla Destination Chargers are becoming crowded and as if this was not enough, now a new J1772 adapter allows other electric cars to charge at Tesla’s Destination Chargers. Not every Tesla Model S owner is happy with that, we all need to adjust and make space.
Advertisement

It doesn't work with electric cars, which are sold in Europe, but only for those EVs that are sold in North America and Japan. This adapter costs nearly 400 US dollars and here is how it works.

But it also has 7 Notes.

There is an active discussion going on in Tesla Model S Owners Group on Facebook and judging from the post not every Model S owner is happy about this adapter.

One person, looking at this negatively writes that Tesla owners paid for the network and some destinations are already showing signs of long queues and this is before the Model 3 hits roads en mass.In fact, TorqueNews had already predicted that Tesla Model S owners could resent the coming of Model 3. And now these Adapters. U.S. Superchargers are already crowded.

Another Model S owner also resented saying "Why should Tesla pay for the chargers, installation etc to expand a network to service their vehicles only to have Nissan and others use their equipment? Last time I checked Nissan was worth a lot more money and had more resources, yet I don't see them rolling out a destination charger system (other than 1-2 at Nissan dealerships only)! I'm for more EVs. I am not for stealing another company's devices for your own use."

Others Say Let Them Use It

But there are also good Model S owners who welcome this adapter and advocate for sharing and for more electric cars on our streets. They say "Let them use it."

One Model S owner, who favors this move writes "I like this, I know from a Tesla Corp perspective, they don't have a lot of incentive to allow their destination chargers to charge other vehicles. It's good for EVs, but not good for the "free" destination charger program that should be for Tesla customers. I want more EVs period. Tesla is doing a TON and has shouldered the burden, I wish other car companies would should more of the burden, but at the end of the day, if this helps EVs, I am OK with it. I wonder how Tesla will handle this going forward?"

Some EV advocates who own a Tesla and and Nissan Leaf will greatly benefit from this. "I want one for my Leaf because I know a ton of Tesla Destination chargers in my area that are never used and they are so close to Superchargers that Tesla’s would be better off not using them," writes another group member who apparently owns a Model S and a Leaf.

Overall, in my opinion it's a good idea if it is safely made.It was nice of Tesla to help with some free equipment. But this can only promote the business and the efforts to promote electric driving. So long as they use the chargers with the permission of the owning facility I see no loss here. However, at the end of the day the industry should come up with a uni-charging system. Like today you can go to any gas station and charge your car. In the same way, you should be able to approach at any EV charging station and charge your EV regardless of the type of the electric vehicle you drive.

What are your thoughts on this?

Sal Cameli wrote on September 22, 2017 - 3:33pm Permalink
Too bad for the Model S/X owners. If 50% of the #EVHOLE Tesla owners would stop "Parking Only" in Charging Spots then us Non-Tesla owners wouldn't have the need to use the destination chargers. Teach your Fellow Model X/S owners to stop blocking charging spot.
Jack B Brown Jr wrote on September 23, 2017 - 8:33pm Permalink
The J-Stub the article mentions is not associated with the prototype being tested in the video you attached to the article. The prototype was made by Brandon Nozaki Miller, not QuickCharge Power. As a Tesla owner, I don't really mind who uses the chargers as long as it follows the rules of the person or company providing the charger. Long before it was a contentious issue, I had a Tesla ROadster charger to J-1772 adapter built for my BMW ActiveE. If the sign says "Tesla Only", then a non-Tesla should not be there. If it says Leaf's only with a J-Stub adapter, then a Tesla should not be there.
Frank Morrison wrote on April 2, 2018 - 9:06am Permalink
The adapter that is pictured is actually a TeslaTap. Since TeslaTap will no longer sell components to QuickChargePower they are now making a copy using a different type of connector. As another Tesla owner my feelings are that if a non-Tesla EV wants to use a destination charger it is fine as long as the owner of the charger is OK with it. Who am I to say anything about it.
Rob Mack wrote on September 28, 2018 - 10:35pm Permalink
I think the answer lie in cost. There should be an auto means (RF ID) to charge non-Tesla owners $5 a charge and free for Teslas.
David Laur wrote on October 25, 2018 - 1:43pm Permalink
LOL!!! I'll remember that the next time (which will likely be today) that I see an X or S using a chademo...
Vernon Hampton Jr wrote on November 1, 2018 - 11:58pm Permalink
1) The electricity used at destination chargers is paid for by the business owner, not Tesla. Tesla only provides the equipment and as such, use charges are at the discretion of the business owner. 2) The roads and highways that every Tesla driver enjoys are maintained by a gas tax that no Tesla driver pays.
Rick Gadue wrote on November 26, 2018 - 1:19am Permalink
Haha, I see so often a Tesla parked and charging, sometimes not, at non Tesla chargers. Was recently thinking how it sux that a Tesla can use one of our chargers but we can't use a Tesla charger. Funny when I first got my I-Pace I was worried about finding chargers since I was so used to Tesla superchargers but to my surprise there's way more chargers for cars/combo. Odd enough this weekend I saw a model 3 at 3rd party charger when the Tesla Super charger was in the same parking lot just around the corner. Sucked for me because I couldn't charge yet there were plenty of open Tesla Super Chargers.
Tom wrote on April 20, 2021 - 11:02am Permalink
If Elon Musk sells adapters so Teslas can charge at J1772 L2 chargers then J1772 cars can use an adapter to charge at a Tesla destination charger.