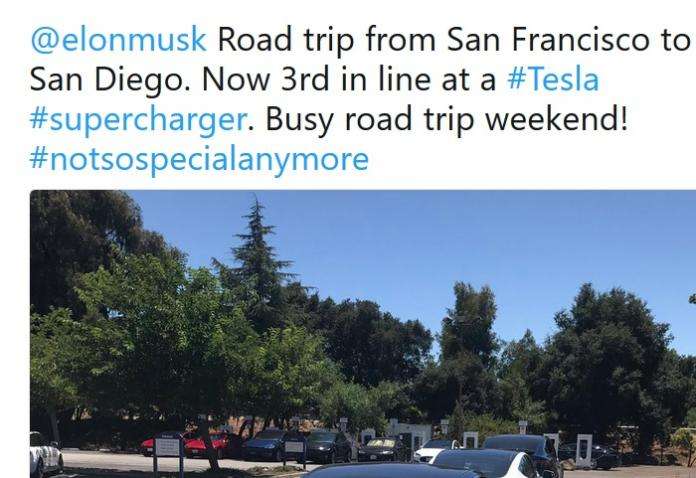 Tesla owners in California are already posting images of crowded Supercharger locations. What happens when the total population of Tesla cars begins to double every six months?
Advertisement

As the Model 3 begins to ship, Tesla owners are reporting long lines at California Supercharger locations now during holidays, special events, and in some case, just a normal day. Will the upcoming deluge of Tesla Model 3 cars make an already frustrating situation worse for existing owners in popular Tesla markets?

Tesla Sales To Date
To-date, Tesla has sold about 135,000 vehicles since 2011 in the U.S. (more in total). Without a doubt, Tesla's strongest market is the metro areas in California, including San Jose, San Fransisco, Los Angeles, and San Diego. Tesla's forecast for Model 3 sales shows that Tesla plans to double the total number of cars it has in circulation within about six to eight months. Teslarati reports that the Model 3 production plan is ahead of schedule and that a production rate of 20,000 cars per month will be achieved by December (three months from now). Adding in the existing 3,500 per month of Model S and Model X cars Tesla already builds shows that Tesla will double its total cars in circulation around June of next year. It doesn't stop there. Electrek reports that Tesla has "zero doubt" the company will be delivering 10,000 Model 3 cars per week in 2018. That means by this time next year the total U.S. population of Tesla vehicles could triple.

Tesla Model 3's Headed Primarily To California
If those Tesla Model 3 cars were somehow equally distributed around the U.S., the problem would not be insurmountable. We drive past the New Hampshire Supercharger location in Hopkinton frequently, and we've never seen a line. However, that is not the plan. Elon Musk has said from the start that the bulk of the Model 3 deliveries are going to roll out in California first. Exactly where current Tesla owners are tweeting images of crowded Superchargers.

Tesla Supercharger Etiquette - Don't Charge to 100%
The current etiquette at Superchargers is to only add up to an 80% charge. The reason for this is that it takes almost as long to charge from 80% to 100% as it does from, say, 20% to 80%. Still, even a charge to around 80% typically takes about 30 minutes or more. That means if a Tesla owner is waiting to top off her vehicle, and is waiting for an owner's slot that just became occupied the wait is an hour until her vehicle is charged up to 80%. Is waiting an hour to charge what new Tesla Model 3 owners expect?

Tesla Plan To Manage Supercharger Overcrowding
Tesla is aware of the issue and announced last year that it planned to double total Supercharger capacity by "the end of 2017." Which is quickly approaching.

kent beuchert wrote on September 5, 2017 - 9:36pm Permalink
This is all the result of Tesla going their own way and using a charging protocol that only they use and controlling the number of charging stations. The future is NOT supercharging. The future of electric cars will be created by the three dozen electric cars being introduced over the next few years and NONE OF THEM use Tesla's charging protocol. Charging stations for these two protocols (SAE Combo and CHAdeMO) will sprout up like mushrooms and don't need permission from Tesla Motors. With the numbers of Tesla Model 3s about to hit the road, coupled with the overcrowded condiitons that exist even now, doubling the number of charge stations will not help, unless those new stations have a hell of a lot more charging pods than they do now. Musk gave no details. So exactly what is a Tesla owner supposed to do if he lives in a condo or apartment and cannot charge at home? Supercharger stations suck. Once again, like collision repairs and maintenance, you are a captive of Tesla Motors. No thanks.
chris laplant wrote on September 6, 2017 - 3:48am Permalink
If you can afford a tesla ,you can afford to add a charger at home. problem solved. There will always be lines at chargers. I wait at gas stations. So long term it will take decades to solve this. So people get a charger at home. If you can't then you bought the wrong car
Tom wrote on November 5, 2017 - 1:34am Permalink
I get the out of town, weekend road trip people showing up, but why would there be so many San Diegans queuing up at supercharger stations in San Diego on the weekend? Wouldn't they have charged their cars up at home overnight, and pretty much be able to cruise around town on that charge? Is it avoid higher electric bill at home and use free supercharger? Is it still a cool novelty to rock up in a Tesla and use the charging stations? Or overly cautious about running out of juice and charging even if they don't "really" need to?