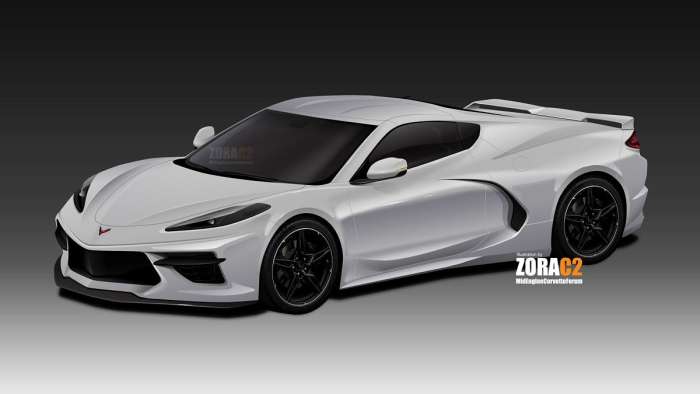 Everyone is anxious to see the all new 2020 C8 Corvette but odds are very good we haven't actually seen anything yet.
Advertisement

GM is going to be making a reveal here in less than 13 days, that's less than 2 weeks before GM changes the face of Corvette as we know it! This is without a doubt the biggest change that the Corvette has ever undergone and we're excited to say the least. The problem is, we're excited for a mid-engine Corvette but we really don't know much factually about it yet. The biggest question mark in the public's mind is "what is it going to look like?"

GM has kept a lot of this new C8 Corvette under wraps (pun intended) and there have been a lot of rumors suggesting that the camo wrap is hiding faux body panels to keep the cars real shape hidden. The headlights and tail lights have both been covered with a camo wrap and purposely misshapen to again, keep the real design hidden.

We don't have much time left to wait to see this car in person but until then, there are almost no confirmed details of this car. Ferrari did something very similar while they were testing the LaFerrari and stripped almost everything off of the car to make it almost totally unrecognizable. GM likely has some surprises up their sleeve and I for one, can't wait to see them! All of the rumors suggesting price, options, engine size, horsepower, etc are all exactly that.. Rumors.

What We Do Know About The C8 Corvette

Like I said, factually, it's almost nothing. There are only a few things that have been seen on the test mules that point to options likely to make it to the real car. Things like: tire size, dash configurations, one seat option, and that's about it. For tire size the fronts will be a 19" 245/35 and the rears are a 20" 305/30 and in usually GM/Corvette fashion they will be Michelin tires.

Recent spy shots have shown the digital dash display to give you a good idea of what it will look like on the reveal day. Spy shots have also recently captured the interior enough to see a real seat option (not sparco) in the new Corvette.

GM is obviously trying to build hype with this car and confirming any of the rumors out there is not something they are going to do until the 18th to keep the rumor mill spinning which, in turn, generates more hype. Not too long ago one of the C8 Corvette test mules lost one of the faux body panels on a track which is what really started to generate the talk of GM purposely disguising this car.

Some of the styling seems odd to me, as well, and I think this is likely because most of the car isn't being shown. GM would be wise to keep the styling under wraps for multiple reasons. 1. competition doesn't know what it will look like until they launch it, and 2. The July 18th reveal will literally blow the consumer away.

Drivetrain Rumors For The 2020 C8 Corvette

This was discussed in more detail in this article but unfortunately, this is no different, none of this has been confirmed yet either. At this point speculation and rumors are all us car enthusiasts have to go on but July 18th is very likely to hold some spectacular surprises for the new Corvette!