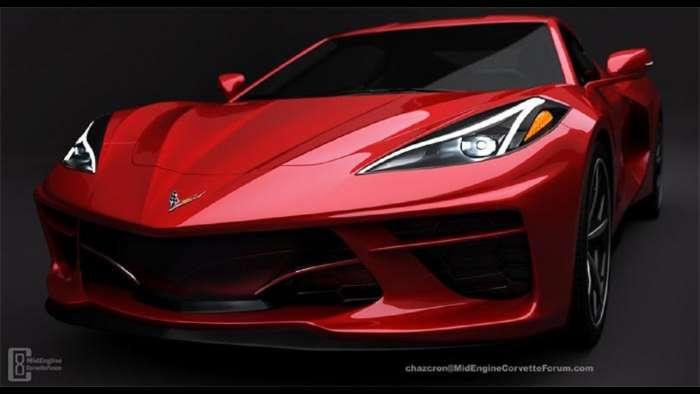 Haven't seen details of the C8 Corvette before? Well, you are in the right place, here is what we know about the C8 Mid-Engine Corvette changes and details.
Advertisement

The single biggest detail of the C8 Corvette that we know for certain right now is that, it will in fact, be a mid-engine setup. Previous generations of the Corvette have all been front engine rear wheel drive so the C8 Corvette going mid-engine is a complete change of design for the American made Sports Car. The design of the car will obviously put the engine behind the driver instead of infront of the windshield. This placement offers improvements in handling, center of gravity, lower weight, etc.

The car will be officially shown to the public on the 18th of July. Up until this point all we have seen of the car has been user renderings and a camouflaged version of the car. There has been much speculation that the camouflaged version we've been seeing testing may have additional faux body panels attached to it to keep us all in the dark about how the car will look in its final form. One of the largest debated panels would be the side intake scoop.

The all new Corvette will likely come with a few different engine options ranging from an LT2 to an LT6 which will start at 530hp and max out at a staggering 1000hp. The LT6, which has been rumored to have over 1000hp, will likely be a hybrid assisted DOHC twin turbo setup with AWD assistance. The car is set to put the power down through an automatic dual clutch transmission which will allow faster shift speeds than seen before in a Corvette. Sadly, there has been no manual transmission shown in any option sheet leak. Michelin tires are likely to find their way back onto this Vette and we have seen spy shots from test cars showing a 245/35/19 front tire size and a 305/30/20 rear tire size.

Price has always been a huge factor for Chevrolet with the Corvette. Price it too low and everyone will have and quality will suffer. Price it too high and no one will buy one over a competing Lamborghini or Ferrari but if you price it just right while making it perform to the standards of the "supercars" then you have a winner on your hands! There was a lot of speculation when the C8 was first seen in terms of price. A lot of people suggested this car was going to start in the 100,000.00 dollar range but that has recently been debunked by a slew of rumors suggesting 60k to 70k as the starting price. Bob Lutz (former vice chairman of GM) recently stated he would imagine the C8 will cost around 5k more than the comparable C7 Corvette model.

GM has filed an impressive amount of patents pertaining to this car and the majority of them have been relating to aerodynamics, specifically, active aero. For any of you out there that don't know what that is, it's basically a huge spoiler for downforce when you need it, and a non-existent spoiler for when you don't. It's basically controlled electronically and can extend at high speeds to provide as much downforce as possible for situations in which you would require it and retracting into the body when you don't. As of now GM has filed patents showing an active front splitter, active rear wing, active side skirts, active hood vents, and an active rear diffuser. These are said to be options on the top end model ZR1 equivalent car.

Joseph wrote on April 13, 2021 - 6:23pm Permalink
New vette left with yuppie. Thank god kept my 1966. Cant fine your fluids.maybe them yup you could call them for help. Few years them new so call corvettes dime dozen.