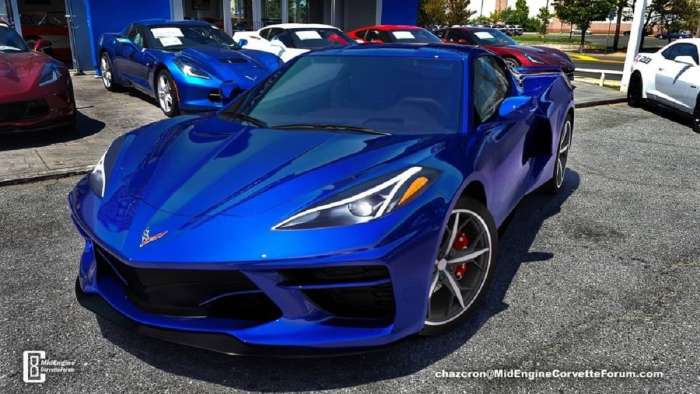 By now everyone has heard of a Corvette, but GM is about to change everything we know about them with the C8 mid-engine Corvette. Here are some changes and why the 2020 mid-engine C8 Corvette is going to be much different compared to the previous Corvettes.
Advertisement

There are a lot of reasons why the C8 Corvette is going to be amazing but these are the reasons that really stand out to me, a long time Corvette fan. Jim Mero recently said "Every new Corvette generation has been better than the one before it and I'm sure the C8 Corvette will be no exception." He's absolutely right, every generation improves on the shortcomings of the previous generation and I don't doubt that to be the case with the C8 Corvette.

The C7 Corvette was quite the performer and quite the looker, the car has it all. This means that in order for GM to make the C8 Corvette better than the 7th generation Corvette it's going to have to be perfect. In fact, here is everything we know about the C8 Corvette changes.

Thus, let's look at 5 reasons why the C8 Corvette will be amazing

GM has a bunch of leaked patents that we can speculate are for the new C8 Corvette and the majority of them are for active aero of some kind. For those of you who don't know what active aero is it's basically aerodynamic bits of the car that can be controlled with a motor which would allow for spoilers to be extended or retracted to work better with the geometry of the car at high or low speeds.

This is one of the biggest factors in allowing the car to handle better, accelerate faster, and overall just better performance without jamming a bigger motor into it, or over engineering suspension, etc. Basically, you can improve the cars performance on many different levels with active aero.

By now I'm sure anyone who is anyone knows that the C8 Corvette is going to be mid-engine. Some purists don't necessarily agree that the car should go mid-engine but, as I've stated before, if you want to stay relevant in the automotive industry you have to evolve and that is exactly what GM is doing here. I have recently had the privilege of driving a Lamborghini Gallardo and it's really only then that you can truly appreciate the differences going mid-engine brings (Watch a 2015 Corvette Z06 Outrun a Lamborghini Gallardo Super Trofeo Stradale).

There is no doubt in my mind that the C8 Corvette is going to be a game changer and the mid-engine placement is the biggest reason. Going mid-engine allows the C8 Corvette to handle better, put down the power more effectively and in most cases, weigh less.

This is something that GM has always been good at and that is offering us different packages or trim levels. You can pick and chose in the Corvette world, do you want a 1LT, 2LT, or 3LT? All of these bring different options, different prices, and even different performance. As a consumer we win when offered options such as these because you can literally build the car you want and not have to purchase a "cookie cutter" car. This goes even further with the offering of a base (Stingray) mid tier (Z06) and top tier (ZR1) offering we are likely to get as well.

This one is of course one of the first items on the minds of all car enthusiasts and for good reason. The "top dog" performer rumored right now is likely to have 1000hp, AWD, and be a hybrid of some sort. It will also likely house some of that active aero we were talking about earlier. GM has always been good at building a performance car that costs much less than the competition (Lamborghini, Ferrari, Porsche, etc.) but matches or exceeds it in performance.

There have been multiple patents filed by GM for C8 Corvette that indicate they are going "balls to the wall" with performance all while keeping a close eye on cooling and other cool tech features like power doors, etc.

5. The Cost of the C8 Corvette

The car was originally speculated to cost upwards of 100k to start but this has been mostly debunked through a series of leaks and interviews with people in the know. Bob Lutz (former vice chairman for GM) stated he thinks the C8 Corvette will cost about 5k more than the comparable C7 Corvette model. There have been many other leaks from people close to the source also stating right around that exact starting price.

We are less than 3 weeks away from the July 18th reveal date where all the questions will be answered. I can't wait to finally see this car! What are your thoughts on it?

Also Watch 5 reasons why the C8 mid engine Corvette will CHANGE the way you look at CORVETTES!, and Click To Subscribe Torque News Youtube Channel for Daily News on Automotive Industry.

See you in my next story, where I am discussing the C8 Mid-Engine Corvette's engine and transmission changes and options.