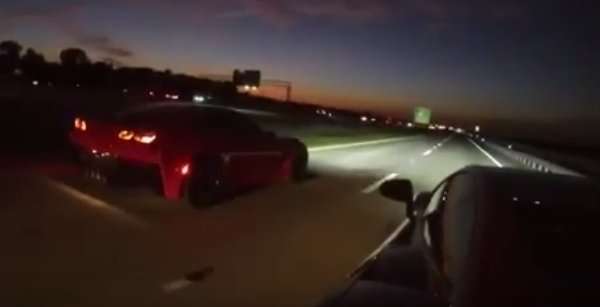 A new video has hit the pages of YouTube showing s 2015 Chevrolet Corvette Z06 besting the Lamborghini Gallardo LP570 4 Super Trofeo Stradale on a long, high speed run – with cameras on both cars showing this clash of modern titans.
Advertisement

The 2015 Chevrolet Corvette Z06 is billed by General Motors as the most track capable Corvette, but there are more than a few video floating around the internet showing the C7 Z06 being outrun in highway roll races. With the news that the 2015 Corvette Z06 has a sort of low power mode when the engine gets hot, street racers around the country have made the supercharged Vette one of their targets – but that didn’t work out so well for this Lamborghini.

Gallardo Super Trofeo Stradale –VS- C7 Z06
The 2015 Chevrolet Corvette Z06 is powered by a supercharged 6.2L LT4 V8 that delivers 650 horsepower and 650lb-ft of torque to the rear wheels. The Lamborghini Gallardo LP570 4 Super Trofeo Stradale is powered by a naturally aspirated V10 that delivers 570 horsepower and 398lb-ft of torque to all four wheels. Based on nothing more than the power numbers, it would seem that the Corvette would crush the Lambo, but it should be noted that the Gallardo Super Trofeo Stradale weighs just 2,954lbs while the Corvette Z06 is the heaviest Corvette ever with a curb weight of 3,524lbs, making the Vette almost 600 pounds heavier. When you add in the Lamborghini’s advantage of all-wheel drive, the race with the C7 Corvette Z06 much closer than you might expect.

This video shows two runs between the 2015 Corvette Z06 and the Lamborghini Gallardo Super Trofeo Stradale, both made from a roll on an empty stretch of road. On the first run, the two cars gets good starts and while the Corvette hops out to an early lead, the Lamborghini stays right with the blown bowtie-clad supercar. As the race goes on and the two high performance sports cars work through the gears, the Corvette continues to edge away until the Lamborghini gives up.

However, that first run shows that when both cars get off to a good start, the new Corvette Z06 will output the Lamborghini Gallardo in its highest performance iteration.

Crank up your speakers, as the sound of these two modern monsters is half of the fun of this video!

Toyota's First EV Will Have a Name of BZ: Toyota BZ
First Videos From Inside The Boring Company's Las Vegas Loop
END_OF_DOCUMENT_TOKEN_TO_BE_REPLACED