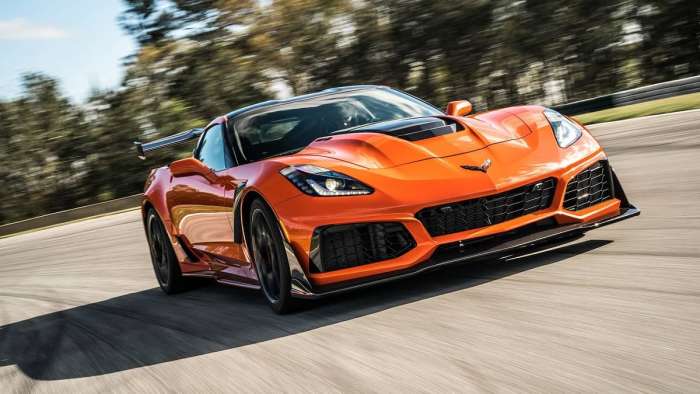 The 2019 C7 Corvette ZR1 is an amazing machine. The last of the front engine Corvette. These are just 2 of the reasons (and there are many, many more) it's going to appreciate in value very soon.
Advertisement

The C8 Corvette is less than 7 days away at this point but there have been many leaks that have Corvette fans everywhere scared. The latest leak shows a rear end that looks strikingly similar to the back end of a 6th generation Camaro.

I don't personally have anything against the Camaro, it's a great car in it's own right, but the look of a Camaro doesn't belong on a Corvette. As we all know the C8 Corvette is going mid-engine this time around and while this is a welcome change for most, some don't agree. The Corvette purists want that engine to stay in the front but I've said it once and I'll say it again, GM has to evolve to stay relevant so mid-engine it is!

Why The C7 ZR1 Is Going To Increase In Value

The C7 Corvette ZR1 has some pretty fantastic specs and is the highest horsepower Corvette built to date. With 755 horsepower and 715 torque it has more "get up and go" than you'd likely ever need. Even though that by itself is quite amazing, that's just one of the reasons this car is going up in value.

The C8 Corvette is rumored to have 530 horsepower as well as a 7 speed dual clutch automatic transmission in its base form. On paper that sounds great, but in reality that's a considerable amount less than the C7 ZR1. Yes, we're comparing the base C7 to the "top dog" C7 but nevertheless, it makes the previous generation more appetizing than the brand new base model C8's.

Ultimately the C7 ZR1 has 4 major selling points that the base C8 won't have. 1. 755 horsepower. 2. Manual transmission offering. 3. Front engine layout. 4. It's available now! Like I said the front engine layout isn't something that I personally would go to battle over, but there is a hardcore group of Corvette lovers out there that hate to see this car lose it's front engine setup.

The C7 ZR1 has more than proved itself on the track and has fixed every issue that the C7 Z06 had (overheating, etc.) The C7 Corvette in general is a fantastic machine and the new C8 isn't likely to directly compete with any of them aside from maybe the Stingray and Grand Sport. Odds are very good the C7 Z06 and the C7 ZR1 will still outperform the base C8 all while having the option for a manual transmission for those hardcore manual guys out there!

What Does This Mean For The C8 Corvette?

Well.. Nothing really. The C8 Corvette will sell pretty well just as all new Corvettes do but with dealer markup and allocation issues it may be hard to get a C8 right away.

A lot of people are going to decide against waiting for this reason and the ones listed above and just get the C7 ZR1 instead. Baring some huge surprise from GM on the 18th this is what is going to happen. A very similar thing happened when the C7 Stingray came out. The value of the C6 ZR1 went up because that car was more available and had better performance than the newest generation at the time. I forsee the same thing happening with the C8 Corvette and it's pending launch.

See you in my next story where I talk about the recent official reveal of the steering wheel from GM.