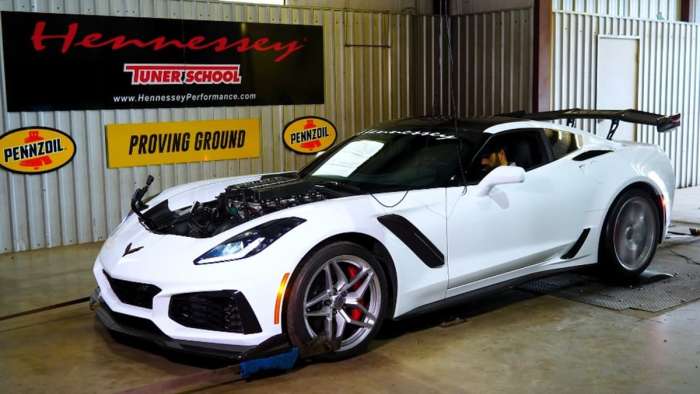 This Is Why The C7 Corvette Should Be Considered a Supercar

By now I am sure all of you have seen a C7 Corvette in one form or another. What some of you may not have seen is the super car killing performance that this car possesses. In its most basic form, the Stingray is a direct competitor for low end Porsches for less than half the price.
Advertisement

At 465 possible horsepower, in a base model car, costing less than $65,000, the C7 Corvette is without a doubt, a bargain buy. Let that sink in for a moment, an American made supercar for less than $65,000. The best part? You can actually get them now for way less than that.

I recently saw a C7 Stingray with under 10k miles on it for $38,000. Now keep in mind this is a car that will directly compete with lower end Porsches. Unreal. The next step up in power takes us to the Z06. To take the Z06 to the next level, it comes with an astonishing 650hp, bigger tires, better suspension, better brakes, and of course, better aerodynamics. This again pushes this car heavily into supercar territory by beating cars with the big names.

Recently official times were released by Jim Mero showing that the Z06 achieved a 7:10 second lap time on the Nürburgring which put it in front of Porsche, Lamborghini, Ferrari, these are just a few of the names that this car has managed to best around the ring. Most people would agree that the cars listed above are in fact supercars, so what do we call the car that is beating these cars around a track and doing so for a lot less? Well... A supercar.

C7 Corvette and The Definition of a Supercar

There is not a real definition for the term "supercar" it leaves a lot up to interpretation and in my opinion, when a car beats a supercar it immediately solidifies a name for itself as a fellow supercar. Some like to argue this point and say "Production numbers are what makes a supercar" and I have only heard this point recently because it's the only point left to argue. Everything else has been accomplished by cars costing a third of some of the Lamborghinis, Ferraris, etc.

Well, this point can't really be argued any longer because now we have a C7 Corvette ZR1.

This is the final installment of the 7th generation of Corvette and it brings 755 horsepower and a slew of cooling options to the table. This car has recently lapped the Nürburgring in 7:04. This is astoundingly fast and Jim Mero openly confirmed he could have gotten a sub 7 minute mark with warm tires since GM apparently forced him to do it on cold Pilot Sport Cup 2 tires.

This time literally puts the ZR1 ahead of the Porsche GT3RS which costs almost twice what the ZR1 does and if the tire statement is true and warm tires could put this car under 7 minutes around the ring then it's in the top 8 of all time around the ring. Think about that! Top 8! That literally means for 120,000 you can own a car that is equivalent to (or better than) almost any "supercar" out there.

It wasn't that long ago that performance like this was not available from anything other than the Lamborghinis, Ferraris, and Porsches of the world. It's only in the last 10 years or so that we've been able to get the performance of supercars at normal car prices.

The Corvette has always been in heavy pursuit of this exact kind of blistering performance and with the 7th generation of Corvette Chevrolet has nailed it. There is no doubt in my mind that the Corvette name has been mentioned in more than one meeting of the minds at Lamborghini, Ferrari, and Porsche. They can't be happy about what Chevrolet has built and is continuing to build.

GM continues to build Corvettes that are able to take on the "top dogs" and come out victorious all for a fraction of what you'd pay for any of those automobiles. Chevrolet has a huge winner on their hands with the C7 Corvette and with the C8 Corvette coming soon they have their work cut out for them in order to make a car that is as good if not better.

The C7 Corvette was such a home run on so many levels that the C8 has to be almost perfect to live up to the name but if it does, ALL of the supercar manufacturers are going to be running scared.

Also Watch 5 Free or Cheap Things You Can Change on Your C7 Corvette to Make It Better and Click To Subscribe Torque News Youtube Channel for Daily News on Automotive Industry.