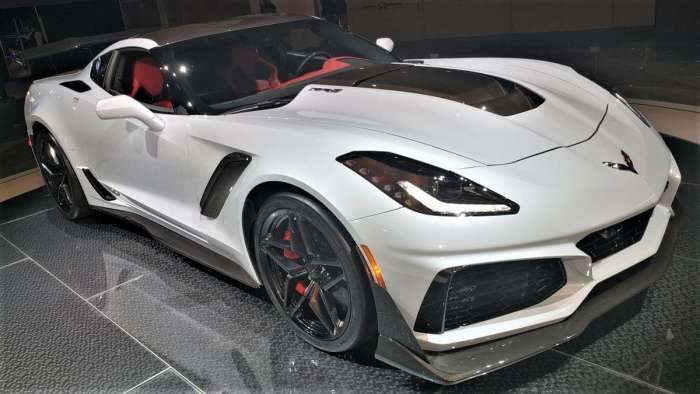 Jim Mero revealed that his best lap time at the Nurburgring in the 2019 Corvette ZR1 was a 7:04, which could be why GM didn’t announce the time.
Advertisement

Prior to the formal introduction of the C7 Chevrolet Corvette ZR1, there was lots of videos and spy shots showing the supercharged supercar rocketing around the Nurburgring in Germany. After the C6 Corvette ZR1 spent time near the top of the list for the fastest production cars to lap the 12.9-mile Nordschleife and the promise that the new ZR1 would be the most track-capable Corvette ever, it was widely expected that the testing ahead of production would come with a stunning lap time.

However, word of a record-setting lap time at the Nurburgring has never come from General Motors and based on the information shared by former test driver and in-house hot-shoe Jim Mero, there is a good reason. According to Mero, the C7 Corvette ZR1 only managed a best time of 7:04, which is well below the best times of some of the other top sports cars in the world – making this a lap time that the automaker wouldn’t want to brag about.

The Unofficial Time
I want to point out that this Nurburgring lap time did not come from General Motors, but rather, it comes from the Facebook page of a business run by former Corvette test driver and Ride/Handling engineer Jim Mero. Mero is best-known in the enthusiast world for being responsible for some of the quickest lap times in Corvette history and he was also involved in C7 ZR1 testing at the Nurburgring.

Mero has since retired and started a new business called “Jim Mero Vehicle Dynamics” and on the Facebook page for the business, there is a gallery titled “Jim's Nurburgring Lap Times”. The last picture is a red C7 ZR1 with “7:04 – Forced to start the lap on cold tires”. Mero commented on the Facebook post that he will be speaking at the National Corvette Museum this summer, at which point we will learn more about the ZR1 Ring run and why he ran on cold tires to start.

With Mero turning the quickest Nurburgring lap times by the Corvette in the past, the odds are good that he turned in the quickest lap for the C7 ZR1. If the best full lap he could turn in was a 7:04, it was the quickest lap time recorded by a Chevrolet product, but it is considerably slower than many key competitors. 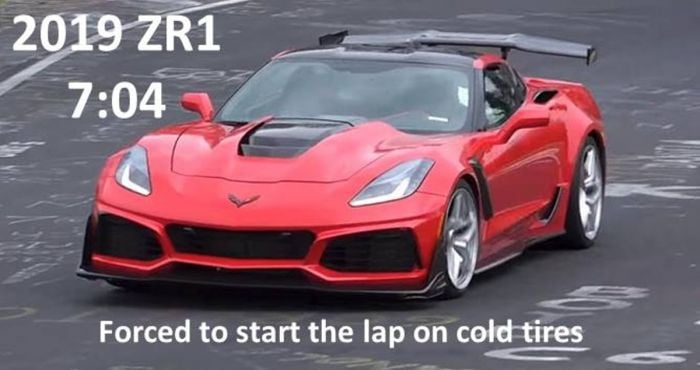 The Viper is gone, but the Lamborghini and Porsche models are all competitors for the Corvette ZR1 in the world of the modern supercars. Although few owners of any of the cars mentioned above will go to the track and if they do, even fewer have the ability to turn record lap times, but when it comes to marketing, a 7:04 doesn’t do the new ZR1 any favors – which is likely why GM never officially announced that time.

David wrote on April 10, 2019 - 3:13pm Permalink
7:04 is lackluster? That’s impressive. For a car that cost a quarter of the ones that can do sub 7 minute ring times.
ForTehNguyen wrote on April 14, 2019 - 8:25am Permalink
funny how a Viper ACR with 100 less hp and a manual transmission did 7:01. Couldve easily done a lot better with factory backing. It was entirely funded privately.
Ferrari4000 wrote on May 23, 2022 - 6:04pm Permalink
The ACR has a lot more downforce and less weight. Downforce and weight are far more important when it comes to laptimes than mere power. That said, the backing the viper team had was much better than the backing that Jim Mero had. Chevy went to the nurburgring ONLY to test the ZR1, and Jim had to literally beg Chevy to let him do more 2 flat out laps. Interestingly tho, the segmented times of those laps was 6:57. Further, the Nurburgring organizers let the viper team have even more time than they had arraged in order to set that lap. Also, part of the track that the ZR1 set the 7:04 time was still wet as it was raining on the track.
Jeff wrote on April 10, 2019 - 3:14pm Permalink
Patrick, what's the fastest front engine time? Most of the fast times are probably mid engines.
NSXPrime wrote on April 25, 2019 - 11:58am Permalink
Mercedes-AMG GT R Pro - 7:04:6 Nissan GT-R Nismo - 7:08.68 FWD: 2017 Honda Civic Type R - 7:43.80
NSXPrime wrote on April 25, 2019 - 12:27pm Permalink
Kind of sad the ZR1 didn't pull off better times MID: Lamborghini Aventador SVJ - 6:44:97 REAR: Mercedes-AMG GT R Pro - 7:04:6 FWD: Honda Civic Type R - 7:43.80
Jared wrote on June 1, 2019 - 8:07pm Permalink
As a Corvette owner. I think they are trash anymore. Still a doorstop with a V8. A butter face in lamest terms.
Bob Donnan wrote on June 3, 2019 - 12:11pm Permalink
Patrick - I’ve been enjoying your articles since your Dad turned me onto your site last year. Hoping you’ll do some electric vehicle reviews too — I know, the awesome roar isn’t there — but the ET’s sure are. You can find my motorsports videos on YouTube as GNARLYBARK. Peace out.
Brendan Wells wrote on February 7, 2020 - 1:53am Permalink
No disrespect to Mero but there should have been a better driver behind the wheel.
Ray Moonshine wrote on March 7, 2020 - 11:30am Permalink
7:04 on cold tires with an engineer driving isn't bad. If Corvette took the Nordshleife times as seriously as some, they would use a ringer. Magnusson, Rockenfeller, etc. It's just not that important.
Brendan Wells wrote on March 7, 2020 - 9:18pm Permalink
Chevy is not too bright if they don't think its important.
WILLIAM West wrote on May 21, 2022 - 7:24pm Permalink
They failed to tell us that Zr1 was testing mostly in the rain