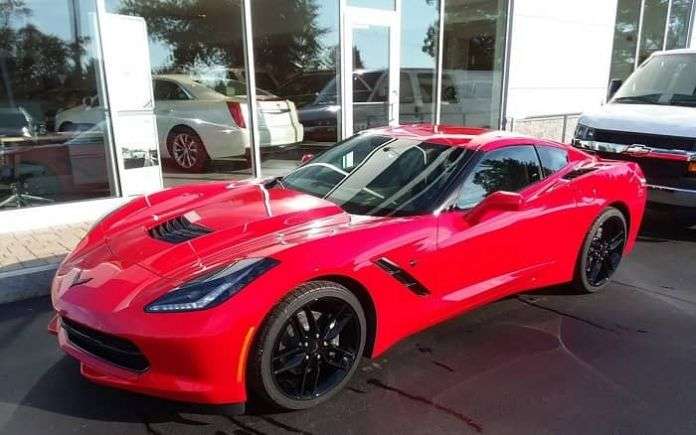 My 2018 C-7 Corvette Stingray experience started about 6 weeks ago on October 19, 2017.
Advertisement

It was 5:00 am and I was about to embark on what turned out to be the coolest road trip I had ever been on in my life. My wife drove me from my house in South Jersey to the Philadelphia Airport so I could catch the 7am flight to Logan Airport in Boston. I landed in Boston at 8:05 am and I immediately turned my phone on to find that I had a voice mail. It was from the driver sent by the dealership in New Hampshire to pick me up. He stated that he was at the airport waiting out front of the terminal. I texted him back and told him I would be right out as soon as I got off the plane. I met him out front and jumped in his car, 45 minutes later we were pulling up to the dealership. As we pulled up to the all glass 3 story building loaded with Corvettes, I could see one lone 2018 Torch Red Corvette Stingray parked out front. I asked the driver if it was mine and he replied “I think so”. At that point I was ready to jump out of the car. I couldn’t get there fast enough. This is how GM has improved the new Corvette.

I went in and met the salesman that I had been dealing with over the phone for the past 2 weeks and immediately started signing the papers that they had waiting for me. I then handed him a check and we went outside to go over the car. We started on the outside of the car and walked around it with him pointing out everything about the car and how it worked. Then we got in the car and we went over everything inside. He then paired my phone to the car, set up my navigation for the ride home and set all the pre sets on my favorite stations for satellite radio. He got out and took my picture sitting in the car. I then hit the start button on the navigation and was off and running. It was 11:30 am. I pulled in my driveway at 4:30 pm. 5 hours on the nose, 322 miles total. The ride home was amazing and the best part-NO TRAFFIC! In that 5 hour ride I got about 75% of the break -in miles on the books.

Fast forward, November 28, 2017 - 1170 miles on the odometer and lots of washing and waxing under my belt, I went in for my first of 3 free oil changes and 1 minor warranty issue I wanted them to look at. The passenger side speaker grill had popped up on one side and when I would push it back down flush with the dash it would pop back up again. The dealer advised me that the wiring harness to the speaker had moved and was preventing the grill from locking down on the clip. They put the wire back in its place and reset the grill in the dash. To date I am totally impressed with this car.

The weather here in South Jersey has been bright and sunny with temps in the 40’s to low 60’s It was 59 degrees today. We only had 3 to 4 days of rain since I purchased the car. I don’t know how much longer the weather is going to hold out with winter right around the corner, but I am planning to drive it as much as possible before winter hits us.

My affinity for Corvettes goes back to 1968 when my uncle bought a brand new 1968 red C-3 convertible with a 4 speed. I was only 10 years old and I absolutely loved that car. By the time I got my license in 1974 he had just gotten rid of the 68 and bought a new 1974 white C-3 with an automatic transmission. This car was left with me every time he went on vacation….17 years old and driving a brand new Vette, this is were it all started for me. I have had the itch most of my life.

In my opinion there is no other car on the planet like a Corvette. It sits in a category all by itself. And while it may not be in the same class as a European Exotic car, it is a classic 2 seat, 8 cylinder American muscle car that has been in production for 65 years. During that time they have changed the car with better technology, different styling and more horsepower. Over the years, from my Uncle’s 68 to his 74, to my first corvette, a 95 C-4 to my 18 C-7, there is something that links all the generations of these cars. For me it’s when you are sitting behind the wheel looking out over the beautifully curved hood, high in the center then dipping down then pitching up and out over the front wheels. I believe the C-7 is the best Corvette ever produced. Chevy knocked it out of the park with this car. The cockpit style interior, the sharp lines of the exterior and the 460 horsepower engine. This is the generation where I believe they got everything right!

Tony wrote on December 3, 2017 - 11:03am Permalink
Hi there Phil, What a joyous read. You painted a wonderful picture of your experience and journey through life with this car sure has come full circle. I feel as if I was that ten year old boy then seventeen years old waiting for my Uncle to leave it to me. This post makes me want to take one for a ride - maybe one day, we all can dream. In closing, you should have a YouTube show going around viewing people vetts and their love for them.
Parks McCants wrote on December 3, 2017 - 3:09pm Permalink
Thanks for sharing your love for Corvette, a true American icon. Cheers!
Ken wrote on December 12, 2017 - 10:08am Permalink
What a great read! My first experience with a Vette was at my neighbors house; I was about 12. From that day I was hooked and determined to own one. I have since owned three; my first was an 05 C6 convertible, my second was an 07 Z06 and my current is a 14 Z51 M7. I have to agree with you when Chevrolet created this car, they hit it out of the park! Enjoy your miles of smiles and consider heading to Bowling Green for the Corvette Caravan in August of 2019. I'll be heading that way from the Pacific Northwest.