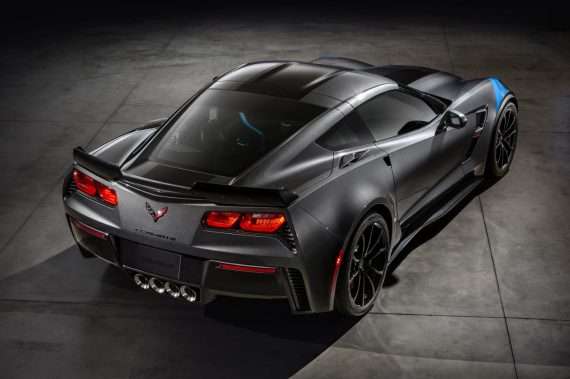 Why the 2018 Chevrolet Corvette won't have blind spot alerts

A New member of the Chevrolet Corvette forum asked a straight forward question. “Will the 2018 model have flashing blind spot alerts of the side mirrors?” So far none of the Corvettes, including the 2017 Corvette Grand Sport shown here, has the blind spot alerts in the mirrors. It is a common amenity on most high-end vehicles, and even on many mid-range vehicles.

A senior member of the group, named Greg, responded with a comment from the 2018 Chevrolet Corvette Chief Engineer, Tadge Juechter. “Tadge answered: Many of the questions on this forum relate to trade-offs in the vehicle design process. Side Blind Zone is a perfect example.”

Tadge’s answer continues.“Generally speaking, we tend to err on the side of not having a lot of alerts that would interfere with the joy of driving. The SBZ feature was just emerging as a feasible customer feature as we were designing the 7th generation Corvette. We thought very carefully about including it in the program since we knew other vehicles were going to offer it. SBZ uses sensors located on the rear outboard corner of the car, just behind the fascia. That is precisely the location we needed to package our race-derived transmission and differential coolers. Having heat exchangers in the back corners interfered with both the physical space need for the sensors and disrupted their performance. In the end, we prioritized vehicle performance over a new feature that we were not sure would be a strong customer desire. We have gotten similar feedback from several customers asking the same question. SBZ does seem to be gaining good acceptance from customers so, although not feasible in the short term, we will strongly consider that customer desire in our future plans.”

Another forum member, nicknamed Running Hot, is skeptical. “Yea, but If it was a NHTSA mandate we would have found a place to put them. All BS they could have fitted them in when they designed a car from the ground up.”

Another driver, who goes by Patent, hopes to see the alerts in the future. “Thanks for posting this, I was really wondering about that. Makes sense. It would be a great feature to have on a car with blind spots like the C7 has. I'm sure future Corvettes will have it.”

A Florida driver suggests making better use of the mirrors, in the meantime. “Best adjust side-view mirrors properly and you won't have blind spots. Until I realized how to set the mirrors up, I could not see another car in the lane next to me just off my rear quarters. When adjust properly, interior rear-view shows all lanes behind your car. As a car in a lane to the left or right of you vanished from your rear-view, they picked up immediately in the side view. Right and left side views only show what is in the lane slightly behind and next to you. By the time the car starts to vanish in a side view mirror (and continue past you) your peripheral vision picks them up next to you.”

That is great advice. Most drivers' education classes, for teens and seniors, teach drivers to set their mirrors up, before doing any driving, to give maximum coverage.

Patent adds, “We have no choice now. Ultimately I think GM understands they will have to include this feature on future versions of a car with an MSRP north of $60K. They were aware of it 5 years ago as they developed this car, but Tadge's post above explains why they nixed it.”

It is amazing how quickly automakers have made the blind spot alerts available on vehicles across the board. It is surprising that a sports car like the 2018 Chevrolet Corvette won’t have it. It will end up on the Corvette, hopefully sooner rather than so much later.

Andretti wrote on February 13, 2017 - 7:02am Permalink
Any driver that thinks mirrors can't be adjusted to eliminate blind spots is not a true driver. There is no such thing as blind spots people. Figuring this out will improve your skills 10 fold.
Mary Conway wrote on February 14, 2017 - 11:30am Permalink
Thanks, Andretti! Unfortunately, many drivers don't seem to know how to set their mirrors! It should be the first thing you do when you get in a car!
Landon wrote on February 15, 2017 - 11:50am Permalink
Its a corvette, if you don't know how to drive and need blind spot alerts, maybe you should stick to a prius!
bob jones wrote on September 7, 2017 - 2:38pm Permalink
I only have one eye and blind spot is a great help. I think you know where you can put your prius.
Andretti wrote on September 7, 2017 - 6:15pm Permalink
I believe you're responding to the wrong person. I don't and will never own a Prius so shoving something I don't have won't hurt. Meantime I'll drive my 18 Z06 sans blind spot alerts. Does a whole line of cars require a feature for your handicap? Maybe you'll have to accept not owning one. Or, even with your unfortunate situation, it'll work 90% with some practice. You've only lost half of your peripheral vision so you'll just have to turn your head a bit more.
Charlie wrote on March 27, 2018 - 11:42am Permalink
I am a baby boomer and also have practically no vision in my left eye. In a recent rental car, equipped with blind spot, it greatly enhanced the pleasure and confidence of driving. After that experience, I would never buy another vehicle without blind spot. I would love to spend $70K with GM for a new Corvette (I have owned 10) but if this is not available, I will spend my money elsewhere. As far as the comments about "don't know how to drive", I sincerely hope that person never has any type of vision or health issue in their lives!