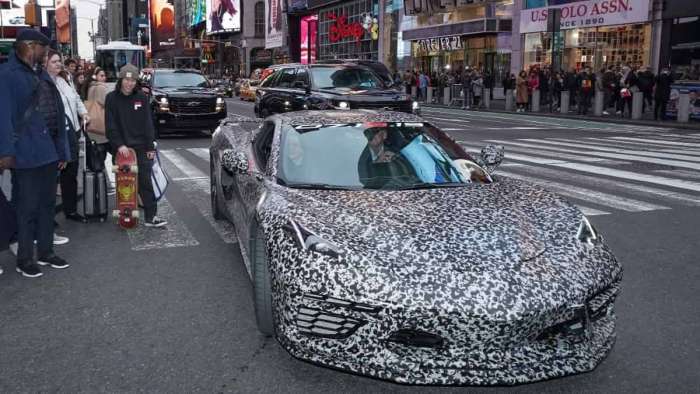 The C7 Corvette Inventory Is Diminishing Regardless of Upcoming C8 Reveal

It wasn’t long ago that I read the C7 Corvette sales were struggling due to incoming C8. Just 2 months ago GMauthority.com reported that there were 9,000 unsold Chevrolet Corvettes crowding dealer lots and then as of 3 days ago they are now reporting that number has dropped by over 2,000 cars. The C7 is a hot Corvette and even with the C8 on the horizon people are still inclined to buy one.
Advertisement

There is a lot of unknowns with the C8 Corvette, many of which won’t be answered until the July 18th reveal, and that is one of the biggest reasons the C7 Corvette is still very appetizing to some.

The 7th generation Corvette stands to possibly be the last of the front engine Corvette and because of this could also act as a collectible to some. There are more than a few proud Corvette owners out there that still don’t want to see the mid-engine layout of the C8 as a “pure” Corvette and because of this, will continue along with their C7 Corvettes or even possibly jump up a model or 2 in order to maintain the “best” possible 7th generation Corvette experience.

The GMauthority website goes on to say that the remaining C7 Corvettes the dealers have equate to a 98-day supply which will make the C7 available for a touch over 3 months. At this point we are less than a month away from the reveal of the C8 Corvette and if it fails to impress that 98-day supply could be cut down drastically but of course if it is revealed and it blows everyone away then that 98-day supply just became a much, much longer supply.

The C7 Corvette can still be ordered and customized exactly the way you would like it until this week. The order deadline has been set by GM and if you are interested in making that once in a lifetime, customized down to the last detail, front engine Corvette yours, your time is running out!

The custom ordered convertible and ZR1 options have already been given the axe so it really only leaves the Stingray coupe, Grand Sport coupe, and Z06 coupe for the next week. After that you’ll have to find one of the 7,000 remaining cars that checks all the boxes for you.

Dealerships Are Offering C7 Discounts To Push Prior To C8 Reveal

If you are interested in making the purchase right now you can also score a 3,000.00 off of the current price to current Corvette owners, while some dealerships are offering even further discounts to get these out the door prior to the C8 reveal. Corvette sales decreased 11.5 percent in Q1 2019 due to all of the C8 talk and in the grand scheme that’s actually a lot less than I would have thought it would have dropped.

Most Corvette owners want the latest and greatest and it really says something when the sales drop a fairly insignificant amount with heavy talk of a newer model coming soon. The fact that GM was able to sell over 2,000 Corvettes in 2 months, with the C8 looming, is very telling of the C7’s appeal.

As a Corvette fanatic I can’t wait to see what GM has cooked up for us with the mid-engine Corvette but at the same time, it’s going to be quite hard for Chevrolet to one up the current generation Corvette. The C7 was a hit in many ways ranging from a much improved interior, to an exterior that would give super cars a run for their money.

No matter how you look at it, GM has created an amazing Corvette with the C7 and the continued sales prove it.

See you in my next story where I discuss why C7 Corvette should be considered a Supercar.