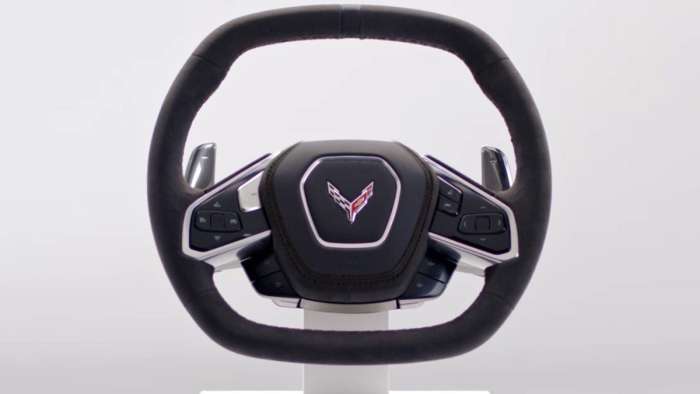 The Official Reveal Of The 2020 C8 Corvette Steering Wheel Design

We are now 6 days away from the full official reveal of this car and GM decided to share the 2020 C8 Corvette steering wheel design to keep us all wanting more!
Advertisement

You know a car is as hyped up as it can possibly be when the fans of said car are getting excited over the steering wheel design. Every step of the way, every additional leak gets us one step closer to actually seeing this car "in the flesh". There were a lot of rumors about the interior of this car and many members of the Corvette forum who claimed to be "close to the source" that stated the steering wheel that was seen in early spy shots was not going to be the final design. Well, here it is, and it is indeed the very same one we saw months ago in spy shots taken of the interior.

Like it or not, this is the final design for the 2020 C8 Corvette steering wheel.

We have seen a few different spy shots of the interior for this car ranging back a few months and so far nothing has changed. The steering wheel and color of the interior has stayed the same.

While some people speculated that the test mule C8 Corvette that had it's interior prematurely viewed by the public was an early rendition and would likely not have the same look as the final product, some people weren't so sure and sure enough nothing has changed. Speaking of changes. Here is why you shouldn't buy the first year 2020 C8 Corvette model and when it is the right time.

The wheel is definitely causing some controversy online. Either you are a fan or you're not and it seems most aren't. I'm somewhere in between, I don't 100% love it but I'm waiting to see the whole package until I make any snap judgements. What are your thoughts on it?

I can't wait to see the 2020 C8 Corvette and July 18th is rapidly approaching. I'm counting down the seconds!