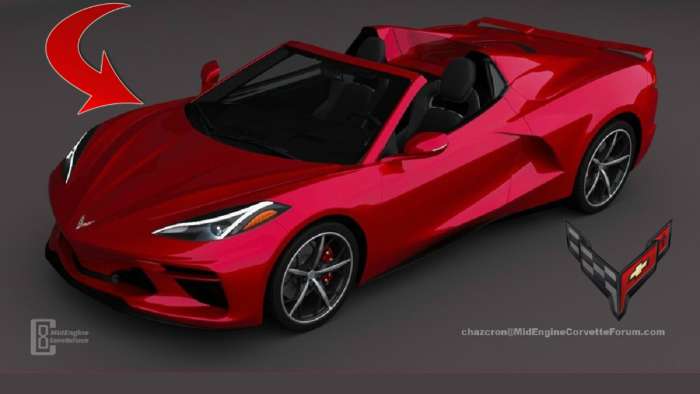 One of the biggest and best features of the C7 Corvette is that every model has a convertible or a targa top option. Regardless of which trim you choose, you get a removable top. What about the 2020 C8 Corvette when it comes to convertible and targa top options?
Advertisement

The 2020 C8 Corvette is almost upon us and what better time to talk about the removable top options than during the middle of the summer heat! I'm in the Pennsylvania area and the "real feel" temperature is around 95 degrees. This is perfect weather for popping the top off of the C7 Corvette and enjoying a nice brisk ride. This was one of my favorite features with the C7 Corvette and definitely one my wife enjoys as well.

This is most likely the biggest reason for it's return in the brand new C8 Corvette. There hasn't been any official mention of this yet but there have been many signs and spy shots showing it's very likely to happen.

For any of you who are fans of some of the Ferraris or Mclarens you will be familiar with the spyder style convertible. It's a different take on "dropping the top" and it allows for a coupe like look with the functionality of a full blown convertible. For the most part, it is a hard top that folds neatly away so it doesn't look like it was ever there. This is really the nicest look for a convertible in my opinion due to the car maintaining the coupe looks.

This will definitely satisfy any of the buyers out there who have to have a convertible and since GM has found ways in the past of stiffening up the frame to the point of not needing that roof to solidify it, I'm sure we'll get this option in the C8 Corvette as well.

With the 6th generation Corvette GM had to sacrifice the removable targa top for both the Z06 and ZR1 models to keep the frame rigid enough to handle the extra power. The base C6 Corvette had a removable top while the following models did not. GM fixed this issue with the 7th generation Corvette and gave all of the owners of any model available the full choice of a targa top or a convertible. This was a huge selling point for the car and still one I read a lot of happy comments about today.

For those of you who don't want the convertible option but still don't mind to "pop the top" every now and then there's an option for you as well! The targa top gives the car a full coupe style design while allowing you to remove the top on those nice weather days. This is something that has been shown in spy shots since the C8 Corvette started testing on the Nurburgring a few months back.

A clear separation between the roof line and where the rear hatch starts indicated a targa top option. This was in conjunction with a model that didn't have that line but appeared to have a slightly different shaped rear hatch where the spyder style convertible would most likely fold into.

As I said before, these options were incredibly popular with the C7 Corvette so it's not likely something GM would leave out of their final design. As I stated in my previous article nothing has been confirmed with this car so there is no guarantee of this but all of the spy shots and rumors all seem to indicate both of these options with almost no varying details. All will be revealed for certain in less than 12 days.

DeanMcManis wrote on July 7, 2019 - 1:28pm Permalink
Justin, I agree that the open roof option was a big seller for the Corvette. The Corvette that I owned was a convertible, and it was great fun to drive with the top down! I do wonder how the C8 Corvette will manage their open top version(s). The targa top should be easy with the mid engine design, but most of the convertible versions of mid-engined cars today barely add much more open-ness than a targa top does. So it may be a tougher sell to spend say $10K more for the convertible C8 Corvette. Still, I hope that they offer both a targa top and full convertible models, and can't wait to see them shown at the upcoming reveal.
Justin Nohe wrote on July 8, 2019 - 11:41am Permalink
Absolutely! I'm anxious to see how this car handles the storage of the targa top. I've read a lot of rumors suggesting it's going to be mechanical which really leaves me questioning why we'd have a convertible option at all but either way, it's going to be awesome to see it in action!
DeanMcManis wrote on July 21, 2019 - 6:57pm Permalink
Well they released pictures of the new Stingray convertible, and it looks just about like your picture above. The only visible differences are that there is glass between the two rollover pods, and there is no glass trunk to see the engine. It was shown that the Targa top locks into the empty rear trunk in the regular Stingray. My guess for the convertible model is that the rear deck lid tilts back and open, and the top section folds down to sit above the engine under the deck lid. I'm not sure if that is true, or if there is some other design, and I do not know if the top mechanism is manual or automatic. Manual would save weight, but it is probably automatic because it looks cooler, and better justifies the price and upscale nature of the Corvette. Regarding price, the C7 price difference was $4500 more for the convertible but it was a full convertible, whereas the new Stingray convertible doesn't look much different than the standard targa top version when open. Still, in most modern mid-engined European exotics there usually is a big premium to be paid for an open top version, if only for status sake. For 2018 Corvettes, about 7.6% of the regular Corvette buyers bought the C7 model in convertible form, and for the Grand Sport and Z06 models the take rate was around 5%. We will have to see what the final price is when the convertible is formally shown. I love convertibles, but considering that you get 90% of the experience and look of the convertible version with the standard targa top for free, we will have to see how well the new convertible model sells.