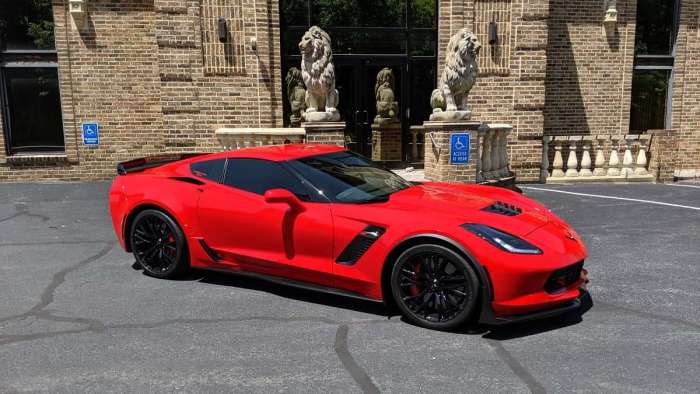 C7 vs C8: Why Right Now Is The Best Time To Buy A Corvette

The C7 Corvette is an amazing machine and the C8 is likely to be a fantastic car as well, but here are the reasons why right now is the best time to buy a Corvette.
Advertisement

If you are interested in buying a Corvette right now might be the best time to do it! The C8 Corvette is right around the corner and while it may seem like a good idea to wait for it, there are a few reasons why that might not be the best plan. The 7th generation Corvette is not only more affordable than ever but it's got supercar killing performance for a fraction of the cost!

This is a question that has a few different answers. While the C8 Corvette is likely to be quite a seller there are a few reasons why you wouldn't want one right away. The biggest reason to buy now instead of waiting for a C8 is cost. The C7 Corvette is a bargain and can be had used for in the upper 30's. That is 465 horsepower for less than 40k.

The best part of this is that the 7th generation Corvette has been tested and put through its paces and has come out victorious in many situations. The front engine rear drive car has been tested again and again throughout the generations of Corvette. Basically, the front engine Corvette has worked the majority of the bugs out and the cost is at an all time low right now.

The C8 is set to be revealed on July 18th and while all Corvette fans everywhere are waiting with baited breath, there is one large item most are forgetting. This is a first time mid-engine car for Chevrolet (unless you count the Fiero and we all know how well that worked out) which means there are going to be bugs, hangups, and growing pains.

This basically means if you rush out and grab the first C8 you can get your hands on you are a "beta tester" of sorts for Chevrolet and may end up with a car that has problems.

Chevrolet has already delayed the release of this car due to electrical issues that they were having early on in the cars testing phase. As of now we have 2 reasons to buy a C7 now instead of waiting and they are: Price, and reliability. Now for the third reason: Performance.

I know what you're thinking "but Justin, we have already talked about this" and you're right, we did but we didn't talk about the performance of the C8 Corvette. The biggest reason this is a huge point to discuss is the way Corvettes have always been released is the base model, a Z06, and then a ZR1 (in some form or another).

This means that the "base" model C8 Corvette that we will be seeing on July 18th is not going to perform as well as the current Z06 we have now. The base model Corvette always performs a hair under the "midrange" Corvette from the previous generation. This means we won't have a C8 capable of taking on the 7th generation Z06 until at least 2021 or later.

The C8 Corvette has been really stirring up the hype on the internet for the same reason all new Corvette generations do. Hype. Dealership markup is the final reason why buying now is a good idea. With all the hype that the new Corvette is generating the dealerships are likely to slap their own markup on the car and sell it for 10k - 15k over MSRP for months after the car is readily available. I remember in 2014 when I tried to buy a Stingray C7 I couldn't find one anywhere for less than 10k over what MSRP was.

Eventually the C8 prices will come down, sure, but we are looking at months before the initial demand dies off enough to drop the price back down to what GM says it should be. (The C7 Corvette Inventory Is Diminishing Regardless of Upcoming C8 Reveal).

Overall, the entire Corvette lineup is solid and you really can't go wrong with any car from any generation, but buying the very first one made could be a mistake. Especially since in this situation. It's an entirely new architecture.

Also Watch The best time to buy a Corvette is right now! Don't wait for the mid engine C8!!, and Click To Subscribe Torque News Youtube Channel for Daily News on Automotive Industry.

Derek wrote on June 27, 2019 - 10:55am Permalink
It's funny how people say the mid-engine Corvette won’t truly be a Corvette... nobody has mentioned yet how the whole idea of going mid-engine started with none other than the Father of the Corvette himself... Zora! And that was back in the late ’50s! I for one am looking forward with great expectation and enthusiasm to the C8! Let progress march on.
Justin Nohe wrote on June 28, 2019 - 7:48pm Permalink
I'm all for the evolution of the Corvette. If it has to be mid-engine to perform better then mid-engine it is!
Ron wrote on July 26, 2019 - 4:02pm Permalink
GM has not commented on how much routine service like an oil change on the mid engine. Or a tune up.
Justin Nohe wrote on July 26, 2019 - 7:26pm Permalink
Very true. If the typical mid-engine design holds true for the C8 Corvette, though, it's going to be expensive.