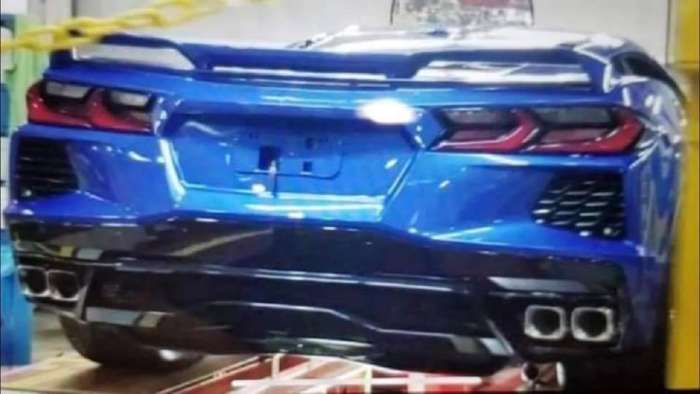 To be clear, it’s not really certain yet whether this is really the C8 Corvette or not, but I am thinking it is. A close look at the photo against spy shots we’ve seen up to this point basically proves this. Where, or when, the photo was taken, no one knows yet but it is very likely a C8 Corvette in the manufacturing plant. The picture shows an Elkhart Lake Blue 2020 Corvette with the wing spoiler that no one really seems to like the look of. It appears to be the same as what we’ve all seen on the test mules, most notably the C8 Corvettes at the Nurburgring that are currently testing the cooling system.

What Exactly Are We Looking At Here?

We finally get to see the production tail light design which shows a slightly clear lens similar to the C7 Corvette Z06/ZR1 tail lights. The tail lights look quite similar to the lights we recently saw on the C8.R testing at night and we also know from several different mule sightings that they will have a sequential turn signal setup. The bottom portion of the rear bumper pictured here is finished in mostly likely Carbon Flash, which is basically black with a silver flake in it, a lot like the 7th generation Corvettes which definitely helps give the car an amazing look. It's a color combination that GM concocted with the Corvette and it works! There is a very good chance this is the car we are going to see on stage in a few days.

If it feels like you've seen this car before it's because you have. The renderings of the C8 Corvette done by Chazcron over at the midenginecorvetteforum.com have been spot on down to the smallest detail. If this picture is the real deal then I have to seriously question Chazcrons renderings as they are almost as if he's seen the car without camo on it before. This is a rendering in blue that Chazcron did hours before this photo from the plant leaked and as you can see, it's identical!

Where Was This Photo of The 2020 C8 Corvette Taken?

The specific location of the car in this photo is unknown at this point but it definitely appears to have been taken at some sort of manufacturing plant, likely in Bowling Green, KY. It appears to be on a lift of some sort surrounded by yellow chains which really tells me we're looking at the car fresh out of it's manufacturing process. I have to wonder if this picture is indicative of more to follow or if this is the only one we're going to get. It's great to finally get a picture of what this all new Corvette is going to look like ahead of the reveal date but now it's got me wanting more!

Chevrolet is set to reveal the all new mid-engine Corvette on July 18 and I'm betting we're going to see the car shown in this leaked image.

See you in my next story where I talk about the C7 Corvette ZR1 and why it is going to appreciate in value soon!