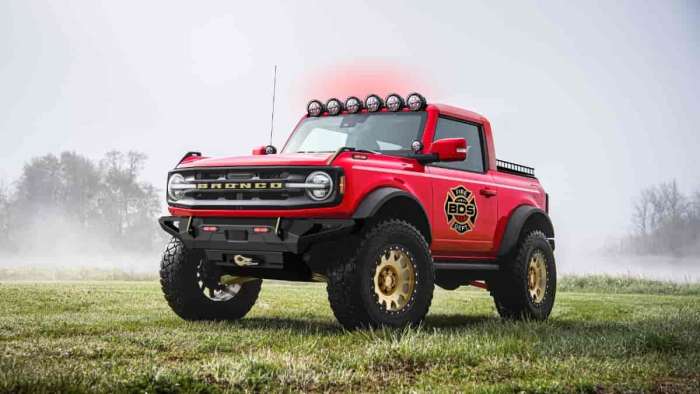 Ford To Display More Than 40 Custom Creations At SEMA Show

When the SEMA Show kicks off on Monday visitors will see more than 40 must-have creations that will highlight Ford's many accessories for its cars and trucks.
Advertisement

Limbering itself up from a year without a SEMA show, Ford has announced that when the Specialty Equipment and Manufacturing Association (SEMA) show kicks off on Monday, the automaker will unveil a lineup of must-have cars and trucks.

Ford Will Have Busy Display

The new display of its lineup will display more than 40 custom creations that should ultimately give customers ideas to customize their Ford products with products from Ford Accessories and Ford Performance Parts.

Ford expects its trucks will fuel the growth for Ford accessories. The automaker expects the new compact pickup Maverick to lead this growth. The Maverick™ is making its SEMA debut at the show. Customers can order whatever specialized parts they want online and have them delivered directly to their homes.

And, the Bronco Brand be well represented with six customized Broncos and Bronco Sport models. They represent what you can do to customize your Bronco.

Ford will use SEMA to unveil more than 40 unique Ford project vehicles, created in collaboration with some of the aftermarket's leading customizers.

"We designed Ford vehicles to be easier to customize, with installation points and aftermarket accessories engineered from the start of the design process," said Eric Cin, Ford global director, vehicle personalization, accessories, and licensing. "We work actively with the aftermarket to share our product designs so customers can personalize and put the finishing touches on their vehicle to make it all their own."

Like Ford, GM will have its share of specialized vehicles at its SEMA display. Show attendees will see what the automaker has done with its revived Hummer nameplate.

For the first time, stablemates Mustang and Mustang Mach-E are SEMA-bound with a unique mix of five custom builds, including a Shelby® Mustang Mach-E concept and a yin-yang combo from the ever-competitive brothers of California customization, Neil and Gene Tjin.

LG's New EV Battery Plant Is a Welcome News for Tesla
Tesla Giga Berlin's New Hurdle: It's Not Only the Gov't, but Now Tesla Itself
END_OF_DOCUMENT_TOKEN_TO_BE_REPLACED