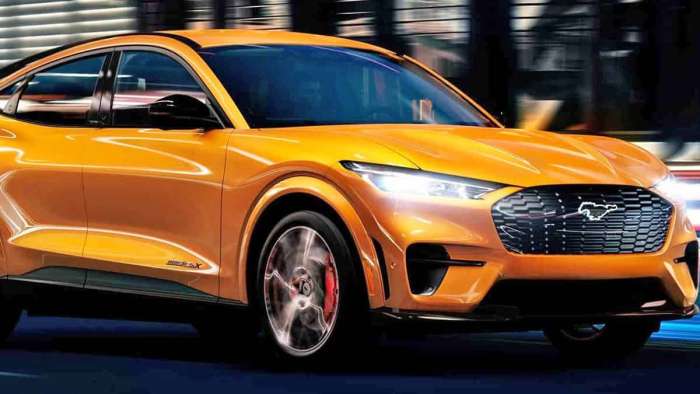 Ford's Mustang Mach-E continues to receive honors from various automotive sources. This time Wards Auto has named the Mach-E a winner of one of its 10 Best UX awards.
Advertisement

For 2021, Wards Automotive uses a unique way to let the world know its 10 Best UX winners. The winners are revealed in a random, non-alphabetic fashion.

Every day from now until Nov. 3, another winner will appear. Yesterday, the winner was the Ford Mustang Mach-E, the automaker's first fully-electric crossover and a key to its future expansion of the Mustang Brand. All winners will receive their trophies on Nov. 17 during the Automotive TechWeek.Automotive Tech Week will honor Wards winners.

Indeed, Wards notes that "this isn't to say the Mach-E doesn't provide a high dose of driving exhilaration. It does that in spades." They made this point when they awarded the Mach-E the 10Best Engines and Propulsion Systems trophy earlier this year. "It's just that with the Mach-E, there's so much more."

Wards goes on to talk about the interior of the Mach-E. It says, "the Mach-E doesn't get the typical battery-electric vehicle design treatment, where costs have been obviously chiseled out from cabin materials and features to offset the expensive battery onboard."

Unlike "other Mustangs, it has a back seat that isn't a penalty box." Wards lauded the interior of the Mustang Mach-E, calling it the "' sharpest BEV interior yet.'" Mach-E Interior Continues To Win Kudos.

Calling the Mach-E a "triple-crown winner," the auto service said the "surprise and delight doesn't stop there." Indeed, they named the Mach-E one of the 10 Best UX "award recipients as well."

As you approach the Mach-E, things happen. "Lights flash on approach, and puddle lamps in the shape of the vehicle's pony log illuminate the ground at night." Once you close the door, "screen graphics come to life, as shooting stars morph into the form of a galloping Mustang. A press of the start button triggers another display of the Mustang logo on the all-digital instrument panel." A key to the interior is the vehicle's 15.5-inch touchscreen that "hammers home the point that this is no standard-issue Mustang."

The center touchscreen – vertical – is designed "around the Sync 4 operating system. It works quickly."

Logically laid out, the graphics are crisp and easy to use. You "don't need to go through multiple screens to find what you are looking for." The Bluetooth "connectivity is among the quickest" Wards has experienced. The Mach-E also features a WiFi hotspot and USB connections front and rear.
Items like Apple CarPlay are wireless, and there is a wireless charger "nestled into the center console." And, in a first for any Ford vehicle, you can use your smartphone to start the Mach-E. Your smartphone can also be used to set control functions and personalized settings.

Mustang Mach-E's voice response system is quick, quickly setting things like a radio station. The voice system can also serve as a GPS to navigate or find a point of interest. It is part of a Bang & Olufsen system that is excellent.

There is plenty of storage. And, instead of an engine under the hood, there's a drainable frunk that serves as a cooler during an event.

As noted here in Torque News and elsewhere, the Mustang Mach-E has a slew of advanced safety and driver-assistance features. Some of the features in the Mach-E include adaptive cruise control, lane-keeping, cross-traffic notice, and blindspot alert. Another feature included in the Mach-E is Co-Pilot 360 Active 2.0 Prep Package. The Co-Pilot is ready for any upgrades to the Blue Cruise highway pilot system Level 2-plus highway pilot system when it is available. The price of the Mustang Mach-E that Wards looked at was $56,200.
Tom Murphy

With a range of 300 miles, drivers can relax and wait until the navigation system signals it is time for a charge.

Wards 10 Best UX judge Christie Schweinsberg was enthusiastic. "It's chock full of infotainment, ADAS features, and surprise and delight," she writes on her scoresheet. "I'd say it's a pretty good deal."

LG's New EV Battery Plant Is a Welcome News for Tesla
Tesla Giga Berlin's New Hurdle: It's Not Only the Gov't, but Now Tesla Itself
END_OF_DOCUMENT_TOKEN_TO_BE_REPLACED