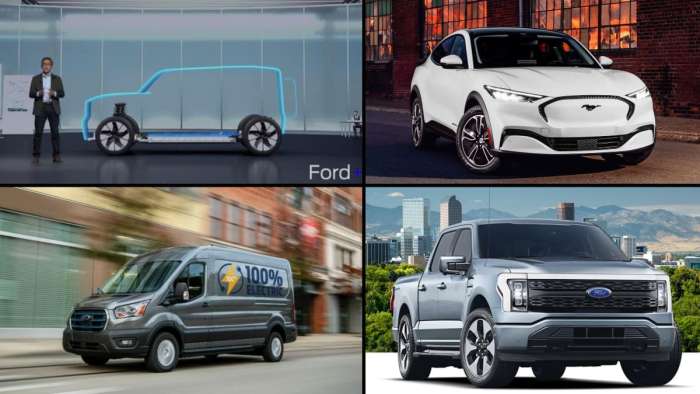 Getting its feet wet with the Mustang Mach E and F-150 Lightning, Ford has promised to become a leader in EV technology. Having electric vehicles is well and good, but as Tesla has shown us, it helps to diversify and not just focus on making cars. In a Tweet today, the plan for Ford’s diversification has been shared.
Advertisement

Today, Ford’s CEO, Jim Farley sent out a tweet that included a video describing the future of Ford. In it, he made the statement that Ford’s focus as a company was shifting from simply vehicles to the “vehicle ‘Plus”. While it’s a vague comment, when combined with the content of the video it has far reaching implications for the future of the automotive industry as a whole.

For #Ford, it’s no longer just about the vehicle. Now, it’s the vehicle PLUS. Here's what we mean by that: pic.twitter.com/2x0TKsOxRI

While “vehicle Plus” might sound like a streaming service, as twitter user @MPSullivanAIA suggested, it is instead, a glimpse into what Ford sees as their own future. For the consumer, the product provided, and the service provided alongside it, are what determine their willingness to part from their hard-earned cash. Ford produces vehicles, like the Mustang Mach E, and the service that they provide for those vehicles is the plus. With this ‘plus’ that Jim Farley has now promised, we see Ford’s intention to diversify further into the service industry, offering ‘uptime and productivity tools’ for Ford’s many commercial contracts that are expected to provide up to 1/5th of the Ford F-150 Lightning’s sales.

Right!? I don’t need another streaming service. Probably only have Ford v Ferrari and Bullit anyway. ;) 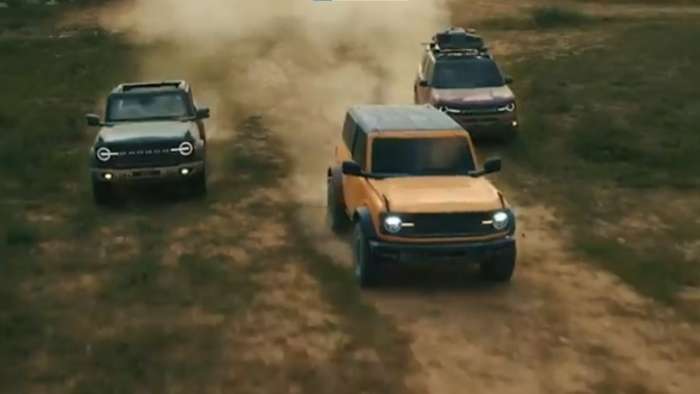 The Plus for the rest of us comes in the form of added utility, like off-road navigation, which; despite what some owners believe, Tesla’s autopilot does not function off-road as seen in this video:

While Autopilot may be capable of working on dirt roads, we can see that once ruts and lines are gone, the vehicle is incapable of finding its own way and demands that the user return their hands to the wheel. The only way that the driver in this video was capable of getting his Autopilot to function on grass was by putting down reflective nylon rope to simulate his course. After the first few runs, there were some ruts in the grass that allowed the tesla to some-what pick-up the previous path he’d taken, but Ford seems to be talking about pathfinding, this is follow-the-leader.

In Ford’s video, they display off-road-navigation as being more truly off-road, on a much less defined path than even the simple ropes used by the youTuber. The three Broncos are seen rumbling across the rugged-looking terrain, though there appears to be some sort of ruts or trail that the lead vehicle may be following. It’s unclear if this is a dirt-road out in the countryside, or just a patch of exposed earth on a trail, but the fact remains that the two vehicles on either side of the lead Bronco only have one line, at best, to follow, and it is not as unbroken as the ropes for the video above. It’s unfortunate that the quality and length of the segment of video from Ford leave us wondering exactly what’s going on.

Ford led the automotive revolution near the turn of the century itself when Henry Ford adopted assembly lines of workers with specific skilled positions. This allowed workers to only focus on one part of the car and do that part well. It also allowed the vehicle to be produced in record time. In the video from Jim Farley’s tweet, Lisa Drake, the North American COO of Ford, describes the intent to bring the mass production superiority of yesteryear forward to the future, wanting to outproduce others in the race for electrification. It is unclear how they plan to get around supply shortages, like the mass deficit of semiconductors that has been causing the chip shortage which has been crippling auto-manufacturers production abilities.

Many orders have been delayed just this year, but everyone was wrongfooted by COVID-19 and then the echoing after-effects that are becoming apparent, so maybe Ford isn’t as far behind as they appear. Rivian has had to delay the launch of their R1T pick-up again, as well, noting that deliveries that were expected to begin in June have been delayed until July; for now. I would also note that the Cybertruck’s release has been delayed a few times as well.

Whether or not the service that Ford+ offers will be as desirable as promised has yet to be seen, but I think that it will take a lot of work to get to the point of customer satisfaction that would foster the loyalty that Ford is expecting from their customer base. Ford seems to be going hard and heavy into the commercial sector, and I think that may pay off for them as most businesses seem to prefer all-in-one solutions and with the advent of these ‘uptime and productivity tools,’ many commercial properties may see Ford as an attractive partner. The private consumer was granted a few peaks into fun features, like the Bronco Adventure Capture, which looks like it’ll be able to help folks produce some amazing ASMR videos, if nothing else, but very little seemed aimed at clarifying how Ford planned to help independent owners. The majority of this release seemed to be focused on the less fun side of automobiles: Commercial Markets.

As self-driving cars take over and emissions are legislated to ICE-Obsolescence, some drivers have complained that a lot of the fun is being taken out of driving. Tesla’s new Model S interior has a large horizontal infotainment screen with stated ability to use controllers from any seat in the vehicle, once Full Self Driving is actualized, the driver won’t even have to pay attention to the road, anyway. Ford’s video seems to cement some of those fears by highlighting commercial properties, but I suppose not every press release needs to include melting tires, when you have videos of the Mach E beating a falling Chandelier, or demonstrating exactly how far 300 miles is.