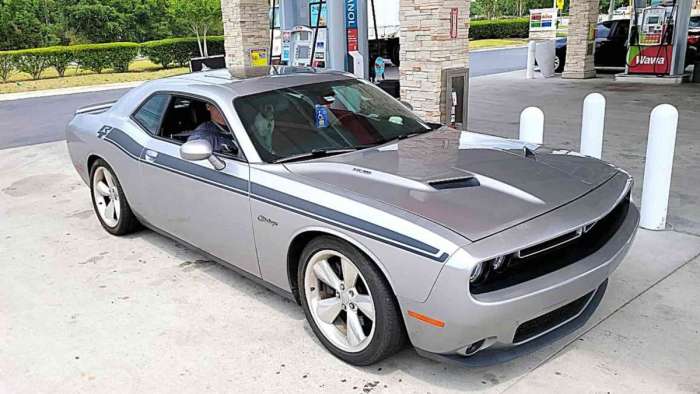 It’s Friday afternoon. Heat radiates from the black-top in a wavering haze. The sound of children screaming at the nearby amusement park is occasionally punctuated by the rumbling growl of the American V8s as they roll into their spots for the Friday night Muscle Car Cruise at Old Town Kissimmee.
Advertisement

Many of the local muscle car owners are here, showing off some of the ponies from their stables. When I first arrived at the cruise, the security cart guided me into the Back portion of Old Town where I was greeted by a rather nice showing of the Bow Tie’s Corvettes.

No fewer than 5 C7s rest, a few of them with hoods opened to the word, displaying the Chevy power plants.

There’s a C8, too, with it’s handsome mid-engine displayed from the rear. I still can’t get past how foreign the C8 looks. Not in a bad way, just… it doesn’t look like an American car anymore.

I only see one Camaro, “Hellraiser”. It’s a nice shade of silver with a custom hood that speaks volumes.

Two Plum Crazy Challengers, another in Red, and a Maroon (with the yellow splitter protectors still attached) Challenger complement my R/T Plus in Billet silver with the Matte black R/T accents. Of the MOPAR muscle here, I would opine that my baby is the prettiest, but I’m horribly biased.

A C5 Corvette has just backed into place in between two of the C7s. It’s an off silver; maybe Champagne color that is quite fetching.

Gaudiest of the vehicles here is a Cadillac CTS that’s entire body has had a chrome treatment. To say that that vehicle doesn’t fit my aesthetic would be quite an understatement. I’ve got nothing against Cadillac, but my family is East Coast Italian and we don’t really roll with that brand. Grandpa’d been in Lincoln’s since I can remember; and I’ve never been interested in vehicles that put comfort and aesthetic over performance.

Further away in the lot are the Mustangs, all of them huddled together; a navy blue 67 being the one that sticks out most to be just by dint of being the oldest Mustang here. Modern Muscle is well represented here today, though we’re all running Dino-burners here today.

No Mach Es have decided to roost next to the other Fords and none of the Nevada manufactured Teslas are here, despite there being a few sport models that would give most of the cars here a run for their money; and despite the invitation being open to any American made performance cars. I do wonder if they’d get laughed out of the cruise by automotive purists?

When, if ever, will EVs be represented at such car meets and cruises?

There’s a cute little Fiat two-seater across the row from me today that looks like it really doesn’t belong in the muscle car segment. Maybe it’s because it’s nestled between two Ford F150s; but seriously, this thing looks like a 500cc Go-Kart, not a muscle car. I think it’d fit under the hood of my Challenger like a chick under the protective wing of its mother.

As I’m typing this here, seated in the cockpit of my silver chariot, a tuned Challenger rolled past with a growl that rumbled MY seat. His exhaust profile was divine and in turn, I’m excited about the prospect of beginning the modification journey of my Muscle car.

As the breeze begins to pick up, the night starts to seem lazy and relaxed in that just-before-summer way that Florida spring seasons manage to produce.

The drive here, a crawl along the Central Florida Expressway, was marred only by a small hiccough of traffic that slowed us down and inspired me to crank the tunes- Classic Rock-and-Roll, as demanded by the import of the inaugural cruise of this beautiful 5.7 Challenger.

With the puppy in the back seat and the husband in the passenger bucket, we’re pretty comfortable sitting here. She’s passed out on the camera bag that we packed to take some pictures of what I’d consider the highlights of tonight’s cruise, but ironically we forgot the memory card. If We hadn’t, I’d be sharing pictures of the Studebaker Avanti that just backed in next to us. Across from her is a Ford F-100 that has clearly seen better days, but her engine bay is clean and the rust bucket apparently runs.

Of all the cars here tonight, that Avanti I’d say was the nicest little surprise. Her original 4.7L engine has been replaced with a Chevy Made LS motor that rumbles quite nicely and if nothing else, sounds like it’d rocket her down the strip at blistering speeds; indeed another admirer actually pointed that out to me, a fact that I’d probably have missed due to my lack of familiarity with the Studebaker brand.

All in all tonight was a nice, relaxing evening out with the family, surrounded by beautiful cars. The highlight for me of course being the several Challengers that showed up. As much as other cars are nice to look at; the aggressive lines of the Mopar just scream Muscle to me. Dodge, I’d like to say thank you for producing a comfortable sports coupe that looks like it eats Hondas for breakfast. Thank you for giving the world this brute of an automotive.

And to my readers, thank you for letting me be Frank with you.

Maria Dimuccio wrote on April 17, 2021 - 9:42pm Permalink
You astonish me. Sounds like cars are where you need to be. I want you to know how proud I am that you are my son. Call me when you get a chance.
Jim Ober wrote on April 18, 2021 - 1:26am Permalink
As far as the Avanti you discribed with the replaced Studebaker engine, I feel that the value of the car is diminished and the soul of the car has been ripped out of it. Part of the cool part of owning a Stude, and in particular an Avanti is to cruise it in the countryside and listen to the 60 year old engine (and in my case the Paxton supercharger) produce a sound and feeling like no other. I own 4 Studes, and they have their own personalities. I'm lucky to own them.