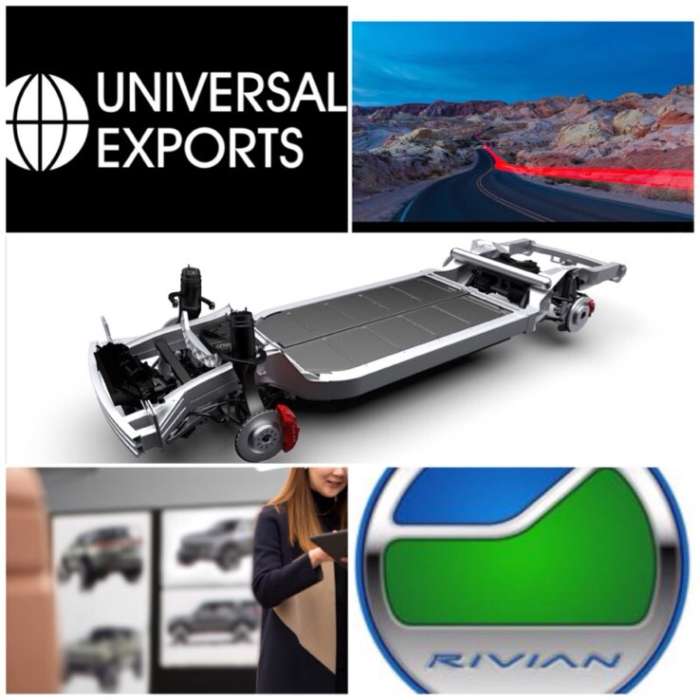 Rivian Auto, BEV Pickup R1T and SUV R1S: So Secretive Rivian is becoming the CIA MI6 of the Automotive World!

Shhh. (Whisper). Have you ever seen a Rivian? In a way I hope not. Be careful if you have. At this stage don’t tell anyone. The electric truck startup might have to execute you for being exposed to company secrets moments away from their LA Auto Show reveal!
Advertisement

ANALYSIS: Rivian Automotive, the 10 year old clandestined electric startup once based in Florida, now in Plymouth, Michigan, has been on a long journey of trying to develop something high tech mobile for production. But is it for the public or just Q Branch? Once starting with a passenger car for us now to realize where that American market is heading, Rivian honed and switched its focus to potentially making what can be a big moneymaker starting in the American BEV market: an all electric BEV pickup truck. But with no renders, no prototypes spotted, no preproduction vehicles seen, not even a reveal of a vehicle or even a fender or a grille, not one vehicle seen on their website sans blurry background drawing images (see pictures above), or even a test mule disguised in camouflage to give us a clue and for them to test but never to be seen out in the wild, sometimes you have to wonder.

What exactly does this company make? Are they even an auto company at all? Are the company’s 400 employees working for a truck company or working for a front as the Central Intelligence Agency is said to do, or something similar to “Universal Exports,” on Her Majesty’s Secret Service: the Secret Intelligence Service of MI6?

Talk about being good at keeping a secret:

Here’s some of the reasons why you wonder:

Still with me folks?

So there’s plenty of inquisitiveness and curiosity with intrigue like I have, and plenty of doubt and pessimism for Rivian to give Tesla a needed break from the naysayers. And plenty of fuel for the naysayers to keep on going, to be fair, no doubt.

In Defense of Rivian:

Now before my house gets cased, my phones tapped, and me followed, to be fair to Rivian, ah, if there actually is a Rivian, I need to use my historian cap to give them the benefit and context as to how they got here, before they send out their double 0 section to find me.

The electric vehicle market was way different back in 2009-2013 than it is even now. And it was and still is, so fast developing and technology news laden and breaking that not even high tech startups like Rivian could effectively catch up with it, and then get ahead of it, to ensure their survival.

Remember we were talking about battery electric hybrids back in 2009 with Chevy Volt being the best thing like sliced bread because the battery tech was awful. We’re beyond PHEVs now to not really need them if someone held them hostage, to have full BEVs with ionized lithium and even more advanced solid state batteries with the ranges we expect from gas cars.

In just seven years from Rivian’s founding we’re almost ready for a full production Level 5 wheeless/pedaless car if GM has their way by next year (that’s not going to happen now obviously, but they submitted plans to the USDOT and they say they’re ready to go).

The Lesson of Tesla Applies to Rivian

If we listen to car guru Bob Lutz, he accuses Tesla of “having no secret sauce” for making their vehicles. He says, Tesla will be in trouble when their competitors catch up with them in their market. A Tesla will become just another electric car like a Mercedes, the inventor of the car, has become another luxury performance brand.

Now look at Rivian. They have pictures on their website of employees testing batteries. Ah, it looks hopeful. Look, I’m sure they’re working on secret sauces, but that requires a manufacturing revenue stream and time, bank financing only gets you so far.

What Rivian Needs to Do to Survive

So Rivian needs to find an angle in the auto market so that they have the best chance of succeeding until they have cash to survive to create secret sauces. Tesla has been around for almost 20 years and is still struggling with no cash and no secret sauce. Be mindful. Vehicle production is a way big step and commitment in the auto industry. Ask Tesla. Now let’s watch Faraday, Lucid, Workhorse, and Bollinger finally go at it. Let’s also watch Rivian.

Water and electricity don’t mix. With the missteps and poor regrettable judgements we’ve seen Tesla make, it’s no wonder why the Faradays, Lucids, Bollingers, Workhorse Groups, whatever the Chinese have going in startups, the legacies too, wade these electric waters more carefully now to production. Some say, whatever it is that Tesla is going through with Model 3, with $11.2 billion USD in what could be a recession making defaultable total debt, some of that is about problems they had starting with Roadster I back in 2008. That’s why Rivian took themselves 10 years to get here with no production car yet. Tesla did it in four.

Whatever the future holds for Tesla, at current status, Rivian does not intend to become the next Tesla for Worse of the electric auto industry. And I don’t think either Detroit, Wall Street, or even Washington would stand for that: two electric car companies with billions of defaultable debt and struggling.

So as Rivian went along and in many good ways, Tesla stole the thunder with electrics, and Google’s Waymo and GM’s acquisition of Cruise to jump them to the head of the driverless line, these things deflated any chance Rivian could have had making either a successful passenger car or make it a driverless one at that, for survival. Like Tesla has its sights on pickups, for Rivian it seems like the best place to boldly go where no electric car company has before . . .

So I half heartedly humor this with cloak and dagger with their secrecy, which is part of the reason for all this because the electric pickup truck market is already intensely competitive, but this I’m serious in their defense: Rivian has to make this count. Rivian’s margin of error ironically thanks to Tesla, is smaller. And with Washington the way it is now, bailouts are no option, I don’t even think for Ford, at least with the present administration and Congress. And a bailout for a startup? Hmm, I don’t think so.

Talk about competitive: If this story is true, Rivian is using what appears to be blue oval de-badged Ford F-150’s probably gutted to become gliders, so that they can apparently install their own frame, battery packs, and power plants. Not known is if this is an arrangement or collaboration for that matter with Ford, or if the vehicle pictured is either a Ford or a Rivian. Rivian didn’t return emails to comment. On the surface this seems like an ironic slap in the face of Ford, whether intended or not. If this vehicle was used as a test mule without Ford input, then it also sends a stinging rebuke to Motorcraftland that if they, like Chrysler and what some say their paltry 5 year electrification plans were that serious, Ford could have been doing full electrification work on a Ford pickup (if they actually aren’t yet) instead of some other company on their own vehicles. If this is the case, then ow that hurts!

Here’s What’s Going On With the Trucks

Rivian describes their soon coming trucks, the A1T pickup and the A1C SUV, as “premium adventure electric vehicles,” so according to one website we should expect that premium to come within the price point of $75,000 USD. That’s between a price range of $50,000 somewhere near for the lower model ranged 200 mile pickup variant, and toward the $100,000 price of a fully loaded 400 mile range five passenger pickup or especially the seven passenger SUV. Of course expect the SUV price to be slightly higher than the pickup.

Mindful that Lincoln is now selling their first vehicle based priced above $100,000 for the gas LWB Navigator, since the A1C vehicle sits niche along with Tesla Model X and the new Audi e-Tron as a Rivian SUV variant, it wouldn’t surprise me if this truck option maxed would hover just over $100K before taxes. An electric American Range Rover I’m imagining for the SUV. An electric American Land Rover Defender pickup for Riv’s pickup variant (incidentally they’ll actually be a British JLR Defender pickup as well).

Man I hope these trucks turn out to be Range Rover done electric American. If not, maybe some kind of resurrection of where Hummer left off before extinction to now be electrified thus now planet friendly. It seems Bollinger is taking care of that end of the truck market and doing it more utilitarian than Hummer ever was. Regardless, Jeep dropped the ball cancelling the Grand Wagoneer years ago with RR (Range Rover) the only serious competitor. RR never looked back since.

There’s been a serious void since then, that no American company has been able to completely fill as a response. Too late, Cadillac’s and Lincoln’s SUVs are not serious off roaders, and don’t even come close in cachet to RR anyway. And besides, they’re both permanently assigned to airport transfer duty and rentals, something Rovers aren’t, that Rivian doesn’t need to happen with theirs, and I hope they try to avoid like JLR mostly has.

These are the same reasons by the way, I say Cadillac and Lincoln can return to their former glory to compete with Rolls and Bentley again. That’s if they really wanted to that they really don’t. I hope Rivian doesn’t have that attitude if that’s where they’re aiming.

I’m prepared to be amazed. Lord I hope I’m not disappointed. The trucks are scheduled for a debut unveil at the LA Auto Show in November 2018. They’re scheduled for production as early as a year or less from now, some sites say 2020, which seems more realistic. The pickup is to lead in production, with the SUV expected to come shortly thereafter.

Torque News emailed Rivian media for a comment to this story, and they did not reply.

Let’s just hope Rivian is as good at making production electric passenger and utility trucks as they are at keeping their planned ones a secret.

But until then, Shhhh. The secret still isn’t out until the LA Auto Show. I’ll be there to monitor!

Images: “Universal Exports” from James Bond wiki, picture of tail light captured with an open camera shutter, chassis platform used by both trucks, and blurred image of pickup and SUV next to apparent Rivian employee are both from Rivian website. Rivian logo ©Rivian Automotive.

What do you think of Rivian’s secret trucks? Let us know below!

Robert Friedberg wrote on November 29, 2018 - 2:47pm Permalink
A car "NUT" for 65 year's and still going strong --- Looking forward to all the latest info in all auto news. Thank you.
Al Castro wrote on December 22, 2018 - 11:51am Permalink
Thank you Robert, pardon the delay, but hope your holidays are going well. If you or any of our readers have any questions for me please don’t hesitate to reach out to me here in the reporters’ section or by clicking anywhere on my name for things about cars, electrics, autonomy, even things like enforcement. Happy holidays, motoring, and stay safe!