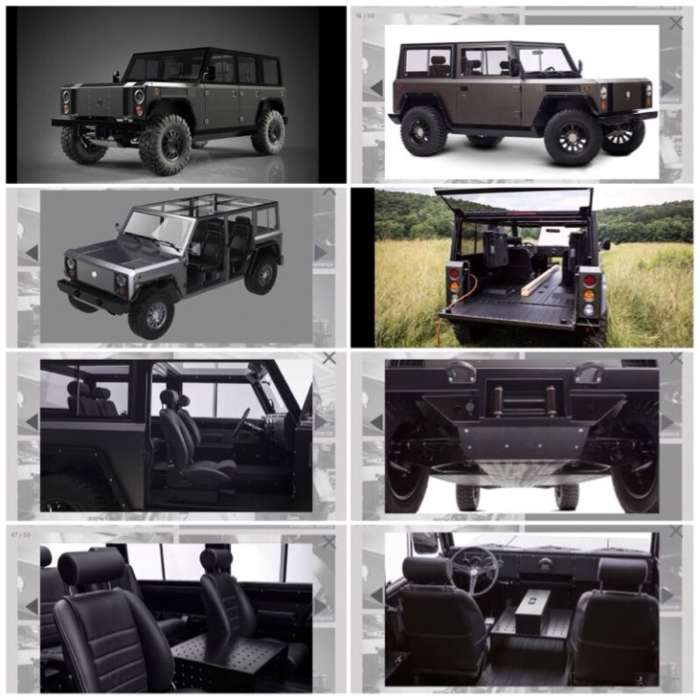 Bollinger B1 Electric SUT: With a New Glass Panel Roof Design it’s Ready for Open Air and Production Ramp Up

Bollinger Motors recently made changes to the B1 with their newly added four door sport utility BEV SUT truck variant that gives the truck a roll cage structure with the doors off if the driver wishes to modify. The removable glass panel roof are just some of the unique features the B1 engineers thought out to make design and production of the B1 as simple and easy as possible to get it ready for soon upcoming production.
Advertisement

Bollinger Motors, the upstate New York electric truck startup, is putting a few late developing touches on its prototype vehicles before it puts its rugged battery electric sport utility truck into production as soon as a year from now or less. The four wheel drive all electric Land Rover Defender challenger seeks the simplicity of an International Harvester Scout in its design, so that it’s easier to manufacture the vehicle, while adding simplicity and military grade ruggedness to its structure:

With probably less than a year before production ramp up with 12,000 reserve orders on stand by, Bollinger intends to move base camp from their present location in Hobart, not far from Cooperstown, upstate New York, to Michigan, so that they can be nearer to their production partners Optimal Inc., in Plymouth Michigan and their suppliers as well. Optimal is going to help Bollinger with production vehicle assembly, and part of that process is for both company’s engineers to collaborate to make the vehicle ready for production. It seems that the changes done to the roof with the roll cage as part of that process. When both companies announced their partnership earlier this year, they anticipated finalizing production plans by the end of this year.

The Startups are Finally Gearing Up

The engineers are putting the final touches to their two prototype pre-production vehicles, a two and four door variant that can easily convert to both open air and pickup trucks, before the final versions of the two trucks is etched for molds and stampings. The mantra of the vehicle is rugged simplicity not only for customer convenience, but theirs as well, as simplicity in design means lower production costs, a crucial component for the survival of any electric car startup on its final phase toward production.

It seems the major electric car startups are on track to see production of their BEVs quite soon, with Faraday Future promising production and delivery of their 1000 horsepower flagship super saloon the FF91 to waitlisted customers as soon as the end of this year. Lucid Motors recently flush with cash from the Saudis, rebooted their production plans for their flagship 1000 horsepower saloon, the Lucid Air, by 2020, that’s now almost a year away. Workhorse Group is scheduled to start delivering its PHEV W-15 Pickup Truck no later than this fall, which is now. So Bollinger’s production plans fall right into the later half of these timetables with late 2019 being their target. This, and the added electric offerings from the legacy car companies.

What’s So Special About B1?

The Bollinger B1 cleverly fills a void in the electric BEV truck market that unfortunately FCA Group could have easily filled with a Jeep variant electrified, had they been more proactive with their 5 year vehicular electrification program. Ford may have something close to this with the halo reboot of the Ranger utility if it were electrified, but it wouldn’t be large enough, and predicated that the new vehicle is like the legacy one of spartan utilitarianism. Had GM kept its Hummer subsidiary H1 electrified would be close to comparison. Sport utility vehicles (SUVs) come a dime a dozen now in the vehicle market. How about a true sport utility truck (SUT)? How about a SUT that doesn’t suck up a lot of gas (or any gas for that matter)!

The B1 is a truly convertible and flexible 4x4 rugged all terrain vehicle truck that can be part SUV, part utility truck, part pickup truck, part camping vehicle, part droptop convertible depending what your needs or wants are. Bollinger describes their truck as a “no nonsense back-to-basics all-electric sport utility truck (SUT).” It is very minimalistic not just in a Model 3 sense sans the dash instrumentation which on B1 is old school, but in a spartan utilitarian sense that you could also use this vehicle as a work truck you can work out of. And during work hours you can use it as a pickup truck. Off hours or weekends you can covert it back to an SUV to drive the kids around.

To use other vehicles as a reference point, this truck will probably be some kind of a direct competitor to Land Rover’s Defender when that vehicle’s new generation version is produced. Think a larger more steroided rugged and more versatile Jeep Wrangler, a full electric version of Defender, with utilitarian simplicity of an International Harvester Scout of the early 1970s.

Using the Tesla-like battery tray that now seems to be an industry standard for BEVs, Bollinger takes full advantage of this by providing a low center of gravity, a fully flat undercarriage with a 1/4” thick aluminum floor plate, high ground clearance, military grade terrain prowess, plenty of storage including a big frunk, and because there’s no motor in the traditional engine bay, a pass though feature that allows you to carry extremely long items like lumber right through the middle of the vehicle with both the front end gate and rear tail gate down. No more strapping home improvement projects on the roof or having them stick out diagonally through the vehicle. Bollinger says you can put 24 long pieces of 2x4s through the 15 foot long end to end pass through, and even with the rear seats removed the cabin is so spacious you can put 72 pieces of 4x8 dry wall in there at 95 cu. ft. Supplies can go in the frunk with 14 cu. ft. of space. A Mercedes S Class has a 16 cu. ft. trunk. A Lincoln Town Car has 21 cu. ft. to gauge the frunk size to a sedan verses rear hatch space.

No doubt that this vehicle is very well thought out, even the details like the roof and roll cage which are considered last minute details in the car maker world when you’re readying a vehicle for near production in a matter of months. Bollinger intends to keep true to the prototypes to make the frame and panels aluminum which keeps the truck light weight and able to have a payload and towing capacity of about 6,000 pounds.

Well thought out also means simple design and function to keep production costs low. The truck will be offered in two variants, two and four door, and all the colors you can possibly imagine as long as it’s like you see with the prototypes, Gunhouse Grey with Black Accents with the wheels being black satin. The interior is all black. I’m surprised but glad the seating is leather, hopefully durable withstand heavy use. It seats only four as the rear two seats are removable to help it along into quick pickup truck conversion mode.

This will be the first production BEV vehicle in auto history to have a 4x4 drive train with a locking differential. Like Jeep and the Enterprise, this vessel is designed to go to places no man has gone before or rarely goes. It’s approach, break-over, and departure angles with its wide stance and 17” wheels make it a steep climber/decliner military grade. It’s totally flat undercarriage with a 1/4” thick aluminum skid plate and high 15.5” adjustable ground clearance makes it a serious all terrain contender.

Sure to be a selling point for this vehicle is the 200 mile range option. While not suitable enough for long distance driving like the 295 mile range of a Tesla Model X, 200 miles is plenty good for daily driving and long drives to a supercharger along the way. Bollinger is aware of this shortcoming that the 120 kW battery pack will be, for now, the biggest pack put into a production vehicle but it doesn’t deliver long distance driving performance. It has asked Tesla if it could have its customers be part of the Tesla Supercharger Network. No known public response as of yet from Tesla.

Mindful, although this truck makes a great camper vehicle on a get-away trip, the main objective was to first make an all terrain work vehicle, which is what this vehicle does. Although their website has limited functioning it is up and running to learn more about B1 and order one. Bollinger still hasn’t come out with a price listing but some of my colleagues at other online sites are giving a price range between $60,000 and $100,000 USD. A Land Rover Defender now costs around $70,000+. So since this is a specialty premium BEV vehicle that sits in the exclusive/luxury market not to be produced in Model 3 quantities, I’m going to price point this truck to have an expected MSRP in the Tesla Model X range of $80,000 and beyond. Other than picking a variant I’m not expecting there to be any significant options available as the truck is fully loaded. Expect the after-market accessories market to take off like it is with Jeep to customize these vehicles, as that seems to be the only thing they’re missing and crying for, as the grey color will only go so far for some people. And expect premium prices because it’s a Bollinger you’re accessorizing.

What do you think of the Bollinger B1 BEV SUT? Let us know below!

Paul Cahill wrote on October 5, 2018 - 9:57am Permalink
I just don't like this truck. I think the design looks like something a 5 year old would draw if their parents asked them to draw the family range rover or jeep wrangler. I really want to like it..but I just can't.
Al Castro wrote on October 9, 2018 - 3:46pm Permalink
Well, look at it this way. People said the same thing about the Range Rover when it came to market. It was boxy and high for a reason. This is a utility truck for rough terrain, not a passenger car, particularly not a sports car where looks count. Also, consider this: the industry is going though a process that’ll last decades. They’re trying to figure out what an electric vehicle should look like, because its engineering is completely different from a gas car. EVs can be more flexible, and that’s what this truck does. It’s form over function, versatility, flexibility, and practicality over aesthetics. We’ll get used to the looks.
Bernard Moret wrote on October 7, 2018 - 2:17am Permalink
I signed up as soon as I saw it a year ago. For once, form completely follows function -- and it's very, very cleverly designed (the pass-through is genius, even if also a bit gimmicky). Remains to be seen how good it will be at towing, but everything else is just as good as can be. As to design: a truck is a box on wheels, so any departure from a pure box is a mistake that costs space and detracts from looks by impairing function. The Bollinger designers fortunately did not make that mistake. Finally a medium-duty pickup truck one could like rather than all these ugly polluting brutes like Dodge Rams or Ford F-350s.