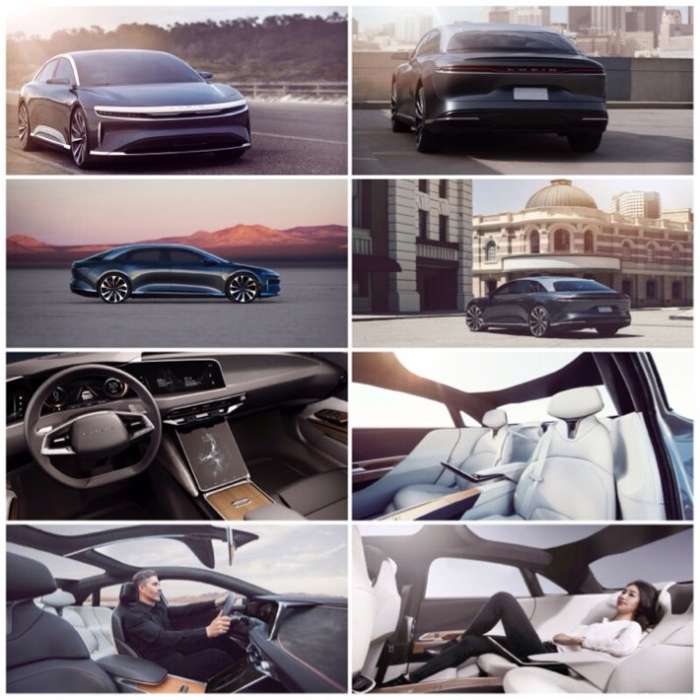 Lucid Motors: Charged Up, “Funding Secured,” and Getting Ready to Make Air: the EV Car Company Lines Up its Ducks Quietly

After not being able to meet a target production date this year due to evaporated funding, Lucid Motors recently did all the things it needed to do to ensure it can meet its next target production date for its first car by 2020. And unlike other electric car companies, it did it quietly without much fanfare.
Advertisement

Lucid Motors, the Newark CA electric car start up has never been in a better position since its founding in 2007 to finally start production of its first electric car. When funding dried out it became clear they were not going to be able to start production of their first car, the Lucid Air, a high end high performance luxury four door sedan meant to compete directly against Tesla’s Model S. But with their recently invested alliance with Volkswagen’s Electrify America charging network helped by the recent investment by the Public Investment Fund of Saudi Arabia, it seems they’re back on track and actually might finally be able to succeed. And do it without much fanfare publicity:

Why a Super Charger Network?

A foregone conclusion in the emerging high end electric luxury vehicle market is that you need a supercharging network of some kind for your own to cater to your high end clientele. Tesla set this trend with their super charger network, and Porsche and Audi are poised to do something similar for their customers. Instead of outlaying badly needed investment capital for a new ground up charger network, when it’s really needed for production, Lucid announced they leaned on Volkswagen’s Electrify America Super Charging Network that’s in the process of being deployed across the country.

By doing this Lucid saves hundreds of millions of dollars and pushes them to the front of the line next to all the luxury brands by having access for the customers to some kind of supercharging network when they do long distance driving. There are about 14 different electric charger networks across the country most EV owners can get access to, but to find them they’d have to access an app on their phone and manually set their GPS to get there.

With the Lucid alliance into Electrify America, it will be able to do what Tesla vehicles do when routing a trip: instead of using your phone, the car’s onboard infotainment GPS can optimize the route along the charger network to ensure a charging opportunity at a network station won’t be missed and do it to maximum efficiencies to save time. This is a selling feature for Tesla and it seems subsequently for all the other luxury brands, and with this alliance Lucid will be able to add this feature into their GPS computer programming for their cars.

At 20 miles per minute of charge, Lucid says that its range topping 1000 horsepower variant of the Lucid Air will be able to full charge in a quick 20 minutes. Most other supercharger networks usually take around 40-45 minutes to fast charge up to 80% capacity, about 3/4 to 7/8 of a tank, if you will. Lucid’s range topper 20 minute fill-up is one of the quickest refuelings so far of any EV on or coming on the market.

Similar to some Tesla charging locations, Lucid intends to offer its customers conveniences like access to food and restrooms similar to the functions of a rest stop.

Brought to You by the Saudi Investment Fund

On track car production, charger alliance, and flush with cash are all game changers made possible by a $1 billion USD investment by Saudi Arabia’s wealth fund. The Saudis had originally intended to invest some kind of figure with Tesla Corporation, but when that fell through over the “funding secured” tweet SEC scandal, the Saudis went cross town California to Lucid, soon to be Tesla’s main competitor.

And in doing so, this sends a message to Tesla, the markets, and the West that not only does the Fund put its money where its mouth is, but it keeps to its word about willing to invest in green technology. CEO Elon Musk may have changed course with the decision not to go public with his company, but the Saudi investment into Lucid, a way scaled down paltry $1 billion USD is a far cry from what Musk needed in the $26-72 billion to finance his scenario. And it pretty much shuts the door for the Saudis to invest in Tesla, ever.

According to Reuters news, the Fund split up the investment in half, the first half makes all these things happen, and the rest dispensed when target goals are met after production starts. With this money the Saudis become majority stakeholders and probably will be given accommodations like seat(s) on the board of directors.

What Does This Mean for Lucid Air?

Lucid has a very good chance, almost a forgone conclusion, that they will be able to start production of their sedan on 2020. This is the biggest step where most EV start ups fail, and that’s trying to get the initial prototype car to production, a very expensive proposition. That Tesla succeeded is one of the reasons for its high stock valuation. If Lucid succeeds, this means that the US will have two electric car companies, intensifying competition between them and the legacy car makers. Like Tesla, Lucid too will make the battery cells for the car, eliminating the need in a tight market for lithium ion car batteries.

Lucid will start producing 20,000 units of the sedan at their proposed factory they announced last year in Nevada, which they hope will employ up to 2,000 people by 2022.

What do you think of Lucid Motor’s Plans? Let us know below!