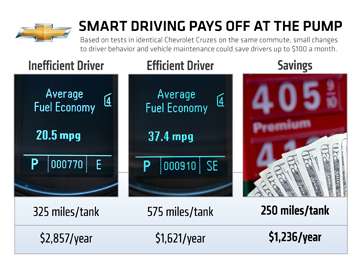 Results from an actual driving test by two GM fuel economy engineers support data from OnStar that shows the fuel economy of drivers in identical cars can vary by 75 percent.
Advertisement

According to the latest news release, Chevrolet selected two identical compact cars for a typical workday commute. The results show that sweating the small stuff could save drivers as much as $100 a month at the pump.

For the drive, GM fuel-economy engineers Ann Wenzlick and Beth Nunning drove identical Chevrolet Cruze LTs, which the EPA estimates get 24 mpg city, and 36 mpg highway. For the route, they drove both cars for 20 minutes, including city and highway driving as well stopping for coffee.

“Ann and Beth’s results support data from OnStar that shows the fuel economy of drivers in identical cars can vary by 75 percent,” said Roger Clark, manager of the GM Energy Center. “With a well-maintained car, the best drivers get up to 25 percent more miles per gallon than average. When you combine a poorly maintained car with inefficient driving habits, the fuel economy of the worst drivers can be 50 percent below average.”

“The fuel economy of every vehicle is greatly affected by how you drive, and how you care for your vehicle,” Clark added. “Often, relatively small changes to your driving habits and vehicle maintenance can make the difference between being on the bottom, or the top, of the fuel-economy scale.”

Lessons Learned: 5 Driving Tips to Save at the Pump

1) Get out of the drive-through lane.
“While Beth waited in the drive-thru with her car running, I shut off the engine and went inside for my morning coffee. Idling for 15 minutes burns through an average of a quarter of a gallon – adding another $1 to the cost of your latte.”
2) Take it easy
“In the city, I accelerated smoothly while Beth demonstrated one of the most common mistakes we see on the road: Jumping on the gas at every light, only to hit the brakes as she caught up with the traffic ahead. Such aggressive driving isn’t going to get you home any faster, while driving smoothly can improve your mileage by 20 percent.”
3) Driving 70, not 80.
“On the highway, I drove 70, compared to Beth’s 80. Again, a 10-mph difference likely won’t add much time to your daily commute, but it will save you up to four miles per gallon on the highway.”
4) Use cruise control
“I tried to maintain a constant speed during our drive, while Beth’s fluctuated with traffic. Try using cruise control when possible, and maintaining a constant speed over time, which is much more efficient than speeding up and slowing down over and over again.”
5) Roll up the windows
“One of the most common questions we get is ‘Is it better to drive with the A/C on, or off?’ At slower speeds, turning off the air conditioning can save you a little, but I always roll up the windows on the highway. Beth was driving with her windows down, and the increased air pressure acted like a parachute trying to slow her down – consuming much more energy than air conditioning ever will.”

1) Low tire pressure
“All four tires on my car were five pounds under their recommended air pressure. That’s not enough to change how the Cruze drives, but it does make the engine work much harder to turn the wheels. Check your tires at least once a month, as a tire that is 10 pounds under pressure can cut your fuel efficiency by more than 3 percent.”
2) Using roof ornaments
“To show support for my Detroit Tigers, I put up window flags on my Cruze for every home game. But, when the boys hit the road, the flags will come down. At highway speeds, up to a third of your fuel is used to overcome wind resistance, so even small changes to your vehicle’s aerodynamics will have a big impact in fuel economy.
3) Carrying extra junk in the trunk
“I had six bags of water-softener salt in the trunk I bought on sale at the hardware store. But, according to EPA estimates, every 100 pounds of weight can reduce fuel economy by 2 percent. While I saved at the checkout, that 240 pounds of salt added almost 5 percent to my fuel costs for the trip.”
4) Ignoring the “check engine” light
“I called OnStar to run a remote diagnostics check on my Cruze, because the check engine light was on. Turns out the light was on because the gas cap was loose. But, more serious engine problems can cut your fuel economy by up to 40 percent.”
5) Not bundling errands
“An engine at operating temperature is up to 50 percent more efficient than a cold engine. So, when possible, it’s much better to run five errands in an afternoon, than running one errand every day of the week.

I would like to see this very same test run with identical vehicles that have GM's eAssist(TM) stop-start technology. In addition, a comparison to a standard split-cycle air-hybrid engine like Scuderi or a Cyclone Power steam engine would further prove the net effect of technology so people can concentrate on living life as opposed to living around their cars.