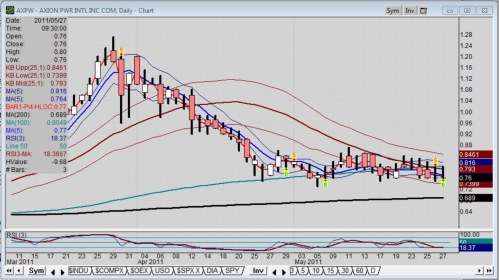 Do not count lead-acid batteries out of the energy picture yet, especially for the micro-hybrid vehicle market featuring stop-start. The Axion PbC® technology represents the first major advance in lead-acid battery and electrode technology in 30 years.
Advertisement

For the investors, Axion Power International operates out of New Castle, PA., and trades on the OTC (over the counter) market under the ticker symbol, AXPW. Last trade record on its website shows $.76 per share. The daily volume is low at 160,000 shares exchanging hands per day, but trades above its 200-day moving average.

On the fundamental front, Axion and its potentially disruptive technology caught the eye of EV.SAE.org which featured the company on its website recently. This technology advancement is ideal for the micro-hybrid segment of the auto industry.

According to the MarketWatch profile, the company's PbC energy storage device is a battery/super-capacitor hybrid. It is unique in that it combines the simplicity of lead-acid batteries with the fast recharge rate and longer cycle life of super-capacitors, resulting in a relatively low-cost device that has versatility of design that would allow differing iterations to deliver maximum power; maximum energy; or a range of balances between the two.

Furthermore, the Axion’s PbC® technology was accepted by the U.S. Patent & Trademark Office and is protected by six issued U.S. patents, nine pending U.S. patent applications and other proprietary features and structures.

According to the Q1 webcast, the company has received an order for batteries from Norfolk-Southern for its new hybrid locomotives. Point is, the technology is now proven to be saleable. Plus Axion Power has completed over a year of testing with BMW, and is developing a lead-carbon, battery-supercapacitor hybrid to compete with the Maxwell-Continental system for a share of the stop-start market.

One of the greatest advantages to the new technology worth noting is the savings in weight, especially for stop-start systems like that used in Buick’s eAssist ™, which are presently using expensive lithium-ion batteries and may be considering expensive ultra-capacitors for the future. Axion’s product solution would be cheaper, especially for compact models.

Furthermore, auto industry experts predict that stop-start will be used in 20 million cars a year by 2015. If China mandates stop-start on all internal combustion vehicles, then that number could be closer to 40 million cars per year.

Prototype energy storage devices using the company’s new technology clearly demonstrate a number of significant advantages over conventional lead-acid batteries, including the following: higher-power delivery levels; 10X faster recharging rates; 3X-4X longer battery life even in deep-discharge applications; significantly reduced warranty claims and premature failures; an environment-friendly and significant reduction in the use of lead, which contributes to a significant reduction in weight; plus the storage devices are maintenance free.

The resulting battery uses less lead and is more environmentally friendly. It is also better suited for renewable energy, hybrid electric vehicle, and many other existing applications for batteries.

Axion’s Intellectual property includes treatment processes for the activated carbon used to make the electrodes, designs and manufacturing techniques for the carbon negative electrodes, manufacturing of the PbC® batteries, and several other innovations related to the PbC® batteries. Axion’s PbC® battery technology can be manufactured in a wide range of sizes common to the lead acid battery industry and therefore can accommodate a wide range of energy storage and power delivery requirements.

According to Axion’s own website, prototype testing has been ongoing since April 2004, and includes complete charge-discharge cycles every seven hours to a 90% depth of discharge. During testing, Axion prototypes have withstood more than 1,600 cycles before failure

In comparison, lead-acid batteries designed for deep-discharge applications survive only 300 to 500 cycles under the same conditions. As an investor/trader, that technology qualifies as disruptive enough for consideration.

Full Disclosure: Frank does not own any shares in this stock at this time, but has an open order to buy at the 200-day moving average as part of his long-term IRA investments.