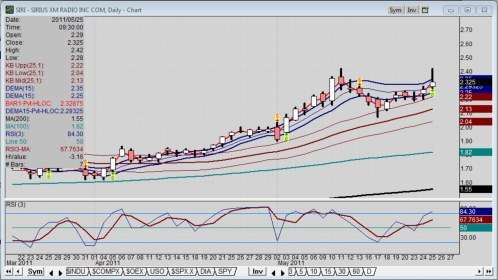 When a special report on 5/13 by CNBC brought Sirius XM Radio stock (Nasdaq: SIRI) to the forefront of investors’ minds, the charts which told the story were looking for a possible retest of some swing lows. Today, it may be communicating the start of testing swing highs by completing the test and closing higher at $2.325 while hitting a $2.42 high, a level not seen since July, 2008.
Advertisement

The daily chart shows a channel breakout forming as well as rising above the MA25 or 25-day moving average.

As I reported on Friday the 13th, Sirius XM Radio stock, ticker symbol SIRI, related directly to the auto sector as its source of revenue is directly tied to the auto industry.

Indeed technical traders firmly believe all fundamentals are reflected in stock prices. If there were any discrepancies, then the market would make adjustments in its perception of value as usual. Today’s price action in SIRI along with the action of the past two weeks may be part of that adjustment.

In my opinion, it pays to focus on the dynamics of prices whether you are a long term or short term trader, or a strict fundamental investor. Point is, that appears to be the case with Sirius XM Radio (Nasdaq: SIRI).

Is the Double Top Resistance or Future Support?

For the record, Sirius stock hit a high of 2.42 today, forming a near-term double top from 5/11 on a daily chart. You’ll have to go back to July, 2008 to find this stock trading at this price level.

Still, this may not be a top to short, though, because the next significant swing high is 2.75 also from July, 2008.

Albeit anything can happen in this market, prudent investors may want to see the 2.42 level broken first by a close above that level before entering a buy. Then again, the 2.75 might be a good upside target; so perhaps an entry at this level might pay off.

If caution was personified, though, then caution would say that everybody thinks differently in the market; and that’s what makes it so difficult to predict. Do your own homework, as Jim Cramer of CNBC’s Fast Money likes to say.

Then again, technical price levels which are resistance can quickly be transformed into a new level of support. All technical analysts know that and live by that credo. It’s always a matter of thinking in terms of probability.

Again for the record, this stock was considered dead money right after the tech bubble burst. Even the merger of Sirius with XM Radio failed to generate anything worth noting.

Just recently, though, the stock tested swing lows and met my monthly projected support of 2.16 while it dipped intraday as low as 2.07. Today the stock broke beyond the midpoint of the DEMA 15 channel or Dual Exponential Moving Average mid-point. In my own system, that defines a buy bias may be in play; at least in the short term.

As a matter of disclosure, I was far too busy writing and trading futures the past two weeks to get filled at the 2.16 level last week. My bad, for sure, but I did manage to pick up a few hundred shares today for my IRA based on the buy bias alone. I’m up a few cents and will hold until the market action tells me I’m wrong.

My rationale is still in place, too: When I reported on the monthly chart a few weeks ago, I noticed a strong angle from the lower left to the upper right. That spelled a bull move was in place from its extreme low, and has been in place, albeit slowly, since 2009; and ratcheting the pace for the past year.

I also noted the track record was in concert with the fundamental recovery in automotive. Point is, that is not a mere coincidence, in my opinion.

So, the stock is not exactly breaking to new highs here; meaning the stock is still on its back. However, the leg has been up from that low and has not suffered any major setback. That in my mind is significant.

Should you buy at this point? That’s up to you. Like I wrote before, I prefer not to buy on news like a CNBC report or because some guy like me writes a positive article, but that’s me. I prefer the price dynamics of the chart to help me make my decisions as it relates to probability, not guru news.

Still, the stock is indeed cheap when compared to its potential and the growth that is coming from the auto industry. That significance is too hard not to notice.

Normally I like to pick a recent low as support. I also like to use the midpoint of an up month bar. In this case, I still like the 2.16 level based on the monthly chart; but the daily chart looks promising to me as well.

Right now I see 2.19, 2.07 and 1.90 as respective swing lows that may act as future price support on pullbacks; in other words, where future buyers may come in again, and where stops may be placed just below.

Keep in mind, too, the 100 day moving average is above the 200 day moving average; and that’s a bullish status by every technical analyst’s measure. In fact, Larry Connor, author, creator of “the Machine” and whom I respect greatly, will not even consider buying a stock unless it’s trading above the MA200. He has the stats to prove its relevance.

Full Disclosure: Frank owns a small position this stock for his IRA

-----------------------
About the Author: After 39 years in the auto industry as a design engineer, Frank Sherosky now trades stocks, futures and writes articles, books and ebooks via authorfrank.com, but may be contacted here by email: [email protected]