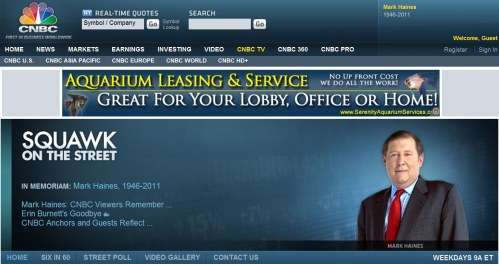 In a shock to auto stock sector readers at Torque News, Mark Haines, founding anchor of CNBC’s morning Squawk Box program and later co-anchor of Squawk on the Street passed away Tuesday evening at age 65.
Advertisement

In addition to the tribute on the CNBC website, CNBC President Mark Hoffman called Haines a "building block" of the financial networks' programming. CNBC is now owned by Comcast (Nasdaq: CMCSA)

As a swing trader as well as a day trader, I personally watched Mark Haines on that program for many years, but especially liked his forcing of CEOs to shed their closely guarded, on-air repertoire, especially when Mark felt it was not serving the interests of investors.

For the record, my watching CNBC dates back to when it was called FNN or Financial News Network.

Mr. Haines was certainly different in his approach to television journalism, let alone financial journalism. According to MarketWatch, Erin Burnett, his on-air partner at CNBC, said “Mark’s legacy is that he didn’t tolerate any B.S. from anyone. He wanted to tell the story; and that’s why so many viewers trusted him. He would always ask the question that nobody else would ask. He was fearless.”

In a separate surprise noted on Marketwatch, Burnett recently left CNBC and will launch a show soon on CNN.

As author of “Perfecting Corporate Character” I dare say I appreciated Mr. Haines’ skepticism which made me feel he was on to the B.S. that many CEOs like to dish out to cover up their sins and faults of rearranging corporate deck chairs.

As a CNBC fan, I’m not alone in that perception, but his CNBC colleagues said it best time and time again on Wednesday morning. Remembering him fondly, they were obviously in shock, as they told moving, heartfelt stories about the man each respected.

Haines hailed from the New York metropolitan area. His career began as an attorney of all things. Later he appeared on-air at TV stations in New York, Philadelphia and Providence, R.I., before he gravitated to CNBC.

Torque News writers respected his way of reporting financial news. He will be missed, but his family will obviously miss him more. They will be in our prayers so comfort and peace can somehow find them during this time of grief.