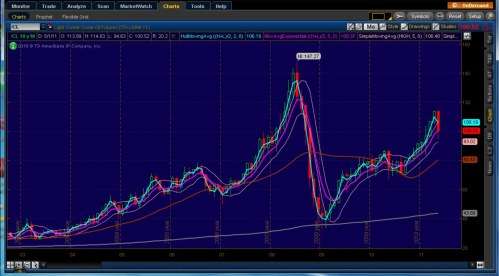 In 2003, the breakeven for Saudi crude oil was $30 per barrel. It’s now reported to be $85 and expected to rise to $110 by 2015, according to the latest MarketWatch article.
Advertisement

Now the really bad news from a trader‘s perspective: Seldom do prices trade below breakeven; and, if they do, not for very long. That goes for any commodity unless a competing commodity takes center stage or a new supply is found.

Considering that Peak Oil has already been reached in the world, or at least cheap Peak Oil, that also means you will never see $30 oil ever again in your lifetime; likewise, $85 and lower is probably a long shot, too, unless America wakes up and goes like a steam engine with balls-out on its use of natural gas, thus upsetting the supply-demand scenario.

For the record, there are indeed alternatives to oil like coal and natural gas. America has lots of coal. Coal, unfortunately, is not clean despite the “clean-coal” ads on television; and it cannot be burned directly in automobiles.

Natural gas, on the other hand, can be burned directly in vehicles, especially trucks. Furthermore, it is plentiful in America, but the auto industry has somehow shot itself in the foot by selling its soul to the electric-car phenomena which must be subsidized. Go figure, unless we use nat-gas for the grid and everyone buys a subsidized EV.

By definition, a “break-even” oil price defines the amount of money the Saudis must make from each barrel of oil to avoid fiscal deficits. And word has it that a higher national debt would jeopardize their fiscal soundness by requiring the Saudis to take on more national debt or risk drawing down their sovereign wealth funds which have been accumulated over many years.

What a novel idea, though - avoiding fiscal deficits! So, that means we in America are subsidizing American debt AND the Saudi spending spree.

And low oil prices means a Saudi failure to fund new commitments which could lead to domestic spending cuts, which could further lead to social and political unrest. Read war here. So that reads like damned if we do; damned if we don’t!

Now that we know the fundamental perspective on oil thanks to MarketWatch, let’s review the oil futures charts to find support and resistance levels.

Although I have used the monthly chart to see the most history, be apprised the 200-day moving average, the standard measure for trend bias by market technicians, shows oil trading at 100.54, above the MA200 level of 90.75.

On the upper end of the monthly chart, we see 147.27 high in 2008. On the lower end, we see 33.20 during the extreme swing of the global economic crisis. Since that time we see oil trading above that mid-point of 90.

Of course, oil can and may trade to that level again. However, based on the fundamental report by MarketWatch, the probability of that happening is low; but if it does, it won’t trade there very long.

And while we honor our fallen military veterans this Memorial Day, I would hope our government leaders would make the right energy choices for America so we don’t have to constantly be at the mercy of foreign powers for our own energy needs, including our military.

Full Disclosure: Frank trades oil futures but not at the time of this report.