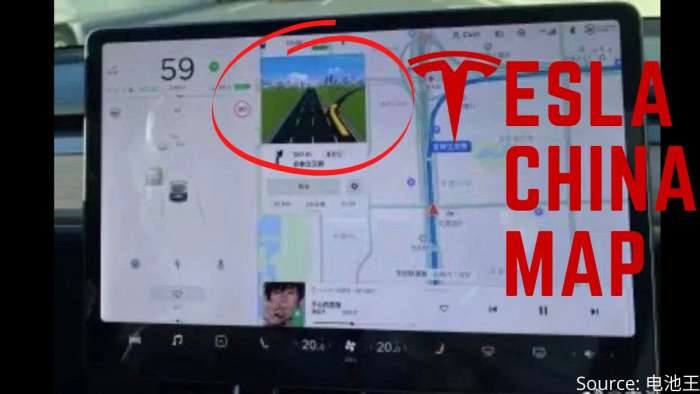 Tesla has released its improved map in china, here are the first glimpses and details.
Advertisement

Tesla is currently working on improving its mapping services in China. Maps and data are essential for Tesla if it wants to run its self-driving capabilities throughout the Asian country.

Difficulty finding a provider
Earlier this year, it announced on Weibo that it was switching from Tencent Maps to Baidu Maps as its provider of in-car mapping services. This came after complaints from Tesla about the user experience of the Tencent navigation services.

The main issues were poor voice recognition, the inability to change routes to avoid traffic and too few speed violation alerts.

Tesla and Baidu have made some improvements in its maps because it announced in an email sent to EAP (Early Access Program) members that it was rolling out an improved map.

The update arrived this week, it supposedly includes improvements such as a more accurate displayed estimated time of arrival, more accurate speed limitations on each road, and a better self-driving experience. The update also brings other map and navigation-related optimizations.

The Update
In a leaked photo, some of these new features were revealed. The new map displays a zoomed-in view of highway exits when a driver approaches it. This helps simplify the driving experience for customers, allowing them to understand the directions and layout of the road before arriving at the exit.

This feature resembles the one TomTom provides. This is still a rather underwhelming update, but since this is the first news we have had since the release of the feature we can expect to see some more features appear.

After all, this is not a complete redesign but rather a series of small improvements that will make the user experience more fluid and accurate.

This means that whenever Tesla brings its vehicles to a new market, they need to have access to improved mapping of the location as well as a period of learning for the AI that operates the autopilot.

In mid-August, Elon Musk tweeted that Tesla is developing a neural net training computer called Dojo to process truly vast amounts of video data. This will significantly improve the pace at which vehicles will learn how to operate within their environment.

The question that remains is when will Tesla start its self-driven taxi program, named Robotaxi?In my opinion, this will be very dependant upon the capabilities of this Dojo training computer and approval speed from governments and administrations.

Future questions
When do you think the Tesla Robotaxi program will start? Will it begin in the US or will approval in China be faster? Please share your thoughts and intuitions in the comment section.
If you can't get enough of Tesla, here is a link to my latest story.