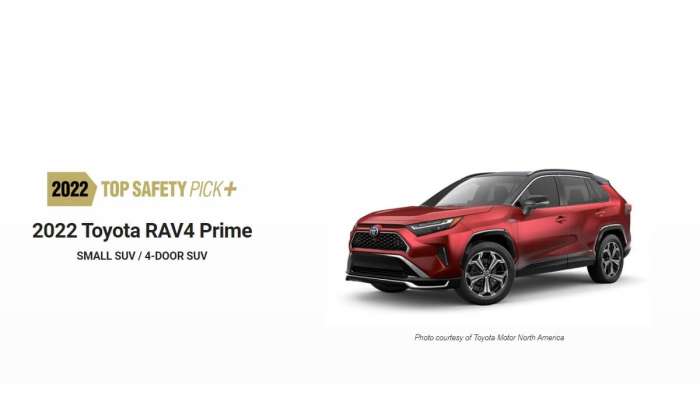 The Insurance Institute For Highway Safety has just released its test results for one of America’s most popular electrified crossover SUVs, the Toyota RAV4 Prime. The RAV4 Prime earned the institute’s highest possible Top Safety Pick + score. This overall score matches that earned by the leader and safety benchmark in the plug-in crossover segment, the Tesla Model Y. However, there are three ways that the RAV4 Prime out-scored the Model Y if you look closely at the IIHS reports for each.

The RAV4 Prime is a plug-in hybrid-electric vehicle that outsold (out delivered actually) all of the battery-electric vehicles in its price range in 2021. At one point in 2021, it was also the second-fastest selling new vehicle in America overall, behind only the Chevy Corvette. The RAV4 Prime boasts over 300 hp and has a 94 MPGe rating. That means it is both quick and has a very low cost per mile for energy.

In the roof strength test, the RAV4 Prime proved to have a stronger roof able to hold over 21,00 pounds compared to the Model Y’s rating of just over 19,000 pounds. This matters in rollover and also other types of crashes and indicates that Toyota built the RAV4 Prime with a solid structure. The RAV4 Prime’s roof can hold six times its curb weight, the Model Y just 4.4 times in static testing. To earn a Good rating, the roof must hold at least four times the vehicle’s curb weight. So Tela’s Model Y just made the cut. The RAV4 Prime made it with a 50% safety factor.

The RAV4 Prime also topped the Model Y in the headlight evaluation. Every RAV4 Prime has headlights rated “Good.” The Model Y, when tested, only earned that rating on its top Performance trim. Model Y Long Range trims only earned an Acceptable rating.

Last, but not least if you have kids, the RAV4 Prime earned the highest score possible of Good+ for LATCH child seat anchor ease of use. Tesla owners will have to make do with Acceptable-rated anchors that IIHS testers reported were buried “Too deep in seat.”

Not included in IIHS testing, but certainly related to safety, the RAV4 Prime has a compact spare tire included on every trim. No Tesla vehicle includes a spare tire.

Both the RAV4 Prime and the Tesla Modle Y are plug-in crossovers of comparable size. Both are overall very safe vehicles. For more information on the test of each model, please click the links below to go directly to the IIHS test reports.

Top of page image courtesy of IIHS and Toyota