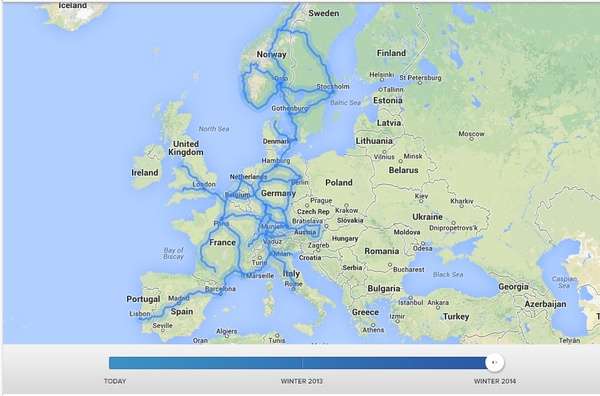 The expanding Tesla Supercharger network is beginning to spread across Europe, and is slated to cover several whole countries, as the company ramps up sales, service and show-rooms across Europe.
Advertisement

The Norwegian Supercharger network covers 90% of Norways population using just six Superchargers. That's thanks to the long driving range of the Model S. Just as Tesla is rapidly expanding the North America Supercharger network, the European network is expanding. By the end of 2014, 100 percent of the population of Germany, the Netherlands, Switzerland, Belgium, Austria, Denmark and Luxembourg will live within 320 km of a Supercharger station, with about 90 percent of the population in England, Wales and Sweden living within the same distance of a charging station.

“The focus of Model S on design, engineering and performance makes it very well suited for the European market,” said Elon Musk, Tesla co-founder and CEO. “This year has already been one of tremendous growth and expansion throughout Europe for Tesla and Model S. Before the end of this year, our European operations will expand even further, with new stores and service centres in locations including Hamburg, Düsseldorf, Stuttgart, Berlin, Paris, Cote d'Azur/Provence, Stavanger, Vienna, Amsterdam, Basel, Geneva, Rotterdam, Arnhem, Stockholm and London.”

“Tesla’s Supercharger network is a game changer for electric vehicles and will offer Model S owners free, fast charging for convenient long distance drives throughout Europe,” said JB Straubel, Chief Technical Officer at Tesla. “All our Superchargers are located near amenities like roadside restaurants, cafes and shopping centresso that road trippers can stop for a quick meal while their Model S charges for free.”