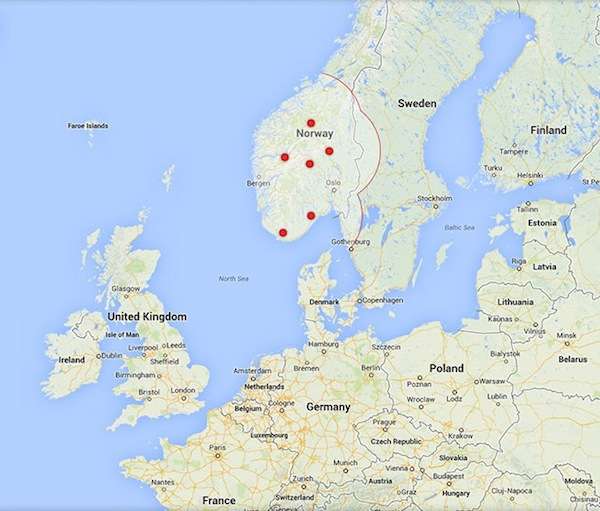 Norway is the first European country to get Supercharger installations, as Tesla begins sales of the Model S in Europe.
Advertisement

Now that Tesla Motors is beginning to distribute the Tesla Model S in Europe, they're also beginning to built the Supercharger network. The company announced on Friday they'd installed six Supercharger stations in Norway, enough to cover 90% of that country's population.

The stations are located in Dombas, Gol, Cinderella, Lillehammer, Aurland and Lyngdal Norway. This covers the more heavily populated southern portion of the country.

As in North America, use of the European Supercharger stations are free.

To mark the occasion three Model S's were driven on long distance trips from the North, West and South of Norway. Each drove over 500 kilometers and stopped at two Supercharger stations apiece. Each stop was greeted by local customers and officials.

The Tesla Supercharger is a proprietary high speed DC fast charging system. While the Tesla Model S supports a 265 mile electric driving range, a normal level would require an eternity to fully recharge the car, but at a Supercharger a complete recharge is accomplished in about an hour, thanks to the 120 kilowatt charge rate supported by the Supercharger.

Because the Supercharger is proprietary to Tesla, only cars manufactured by Tesla can use the system. Tesla's vehicles is not compatible with either the CHAdeMO or SAE DC Fast Charging system, Model S owners will be unable to use the public DC fast charging stations being installed. However, it's known that Tesla is developing an adapter to support using a CHAdeMO charging station that will be available world-wide.

Why Norway first? That country has strong incentives for electric car purchases, and widespread of electric vehicle ownership. The first European Model S delivery was in Norway for a reason.