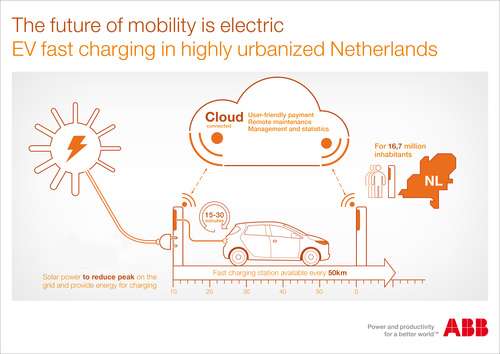 The largest ever nation-sized electric car charging network will be built in the Netherlands by Fastned and ABB. The two companies are chasing the solar-powered-electric-car-charging-station dream, and plan to have at least one charging station within 50 kilometers of each inhabitant of the Netherlands.

They will begin construction of the network in September 2013, and target finishing in 2015. The stations will use ABB's Terra 52 or Terra 53 fast charging stations, with a power of 50 kilowatts, and will support both CHADEMO and Combined Charging System protocols for DC Fast Charging. This means the Fastned stations will be usable by owners of any electric car from major manufacturers. Because Tesla's DC Fast Charging system is proprietary to Tesla, these stations will not be usable by owners of the Tesla Model S.

The stations will be built with a solar carport, which will offset some of the electricity used to run the stations.

DC Fast Charging allows electric cars, the ones that have this feature, to quickly recharge. Generally speaking it is an 80% recharge in about 30 minutes. Currently the Nissan Leaf is the primary example of an electric car with fast charging. It uses the CHADEMO fast charging standard. The Tesla Model S also supports fast charging, using a protocol that is proprietary to Tesla. The Combined Charging System is a newer protocol, and until this month there were no electric cars available which supported the standard. The Chevy Spark EV, which just went on sale, supports the CCS DC Fast Charging system.

“This countrywide network of locations will lay the basis for the commercially viable development of e-mobility,” said Bart Lubbers, one of Fastned’s founders. “I foresee a race towards faster charging and larger batteries throughout the car industry.”