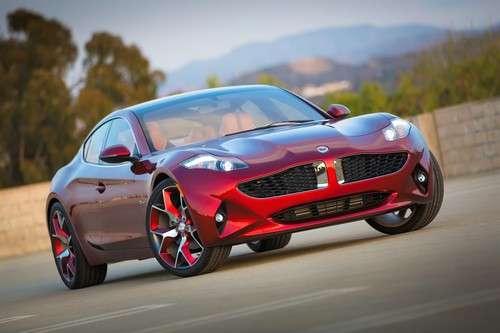 Fisker Automotive has had a rough time, with over a year of struggles between failed battery packs from A123 Systems, and an inability to manufacture the Karma.
Advertisement

On Wednesday, Henrik Fisker suddenly resigned his posts with Fisker Automotive, the plug-in hybrid luxury car manufacturer he co-founded in 2007. The resignation follows more than a year of turmoil at the company and taken with the recent news that Fisker is talking "buyout" with Chinese automakers is a strong signal of serious trouble.

The press release issued by Fisker Automotive worked hard to make the resignation sound benign, see Patrick Rall's article Henrik Fisker resigns - possibly signaling the beginning of the end for Fisker Automotive. However, it is rarely a good sign when company founder that is closely identified with the company to "resign". See Nicolas Zart's article Is There Life For Fisker Automotive After Henrik Fisker Walks Away? Especially when that company (Fisker Automotive) has reportedly been in buyout talks with various Chinese automakers, after the Wanxiang Group scooped up Fiskers battery supplier, A123 Systems, and A123's bankruptcy forced Fisker to stop production of the Fisker Karma.

In Feb 2012, Fisker Automotive laid off some workers after the Dept of Energy froze loans to Fisker granted under the ATVM loan program. This move came after the company had missed several business development milestones required by the loan agreement. The affected workers had been refurbishing the former GM factory in Delaware owned by Fisker, that was to be the manufacturing location of the FIsker Atlantic.

The Atlantic was revealed in April 2012, but with no projected production date. Previously the Atlantic (then code-named Nina) had been projected to start production in 2012. The frozen Dept of Energy loans had been slated to support production of the Atlantic, and obviously the frozen loans endangered that plan. By the summer it was clear that the Atlantic production launch had been moved back to 2014, at the earliest. In November 2012, the company opened a "technical center" in Detroit to aid in finalizing the Atlantic's design.

By the end of Feb. 2012, Fisker's management had begun denials that the company was about to go bankrupt. At that time Fisker spokesperson Roger Ormisher said talk of Fisker's corporate death was overblown, and that the DoE loan issue was just a bump in the road. At the same time, management ramped up efforts to raise private investment capital to replace the money lost from the Dept of Energy loan, and to get free of control by the Government. In total Fisker Automotive has raised over $1 billion in private investment capital.

In March 2012, news came to light that a Fisker Karma bought by Consumer Reports for vehicle testing had broken down on CR's test track. It was later learned that this breakdown was due to other flaws in A123's battery packs.

At that time A123 Systems seemed to be on a roller-coaster ride, swinging wildly between disasters and great news. The company had announced deals with Tata (India) and SAIC (China) for supplying battery packs, and indeed the Chevy Spark EV (also made using A123 Systems battery packs) is expected to go on sale this summer. In June 2012, A123 announced the new Nanophosphate EXT battery technology that promise great performance improvements in hot and cold weather. That technology should lead to more sales of A123's battery packs if only because it means vehicle makers can make cheaper battery packs.

In May 2012, Fisker's management released a "business update" that claimed that Fisker's financial status was fine. At that time Tom LaSorda, Chief Executive Officer of Fisker Automotive, said: “We are encouraged by solid demand for the Karma, our unique extended-range luxury model. Pending completion of investment sourcing, we are poised to press ahead with further market expansion and development of our higher volume model, the Fisker Atlantic.”

That this statement was made by Tom LaSorda rather than Henrik Fisker is another thread of the story. Fisker, as co-founder of Fisker Automotive, had served as CEO for several years. In Feb 2012, LaSorda, former boss of Chrysler, was picked to be CEO. By August 2012, LaSorda was out as CEO, and had been replaced by Tony Posawatz who had been head of the Chevy Volt program at GM. In November 2012, former GM Marketing chief Joel Ewanick, stepped in as interim boss of Fisker's Marketing team, to replace retiring John Beattie.

The hires of Posawatz and Ewanick caused some rumoring around whether Fisker Automotive was planning to take on the Chevy Volt with a future car design.

Not all has been a difficult slog for Fisker Automotive. In June 2012 the company's dealership in Montreal opened, and in October the company announced a dealership agreement for several countries in the Middle East. The Fisker Karma also won several prestigious design awards in October 2012, and two more in May 2012.

By June 2012 the world started to unravel for A123 Systems. Shortly before announcing the Nanophosphate EXT technology, the company's management warned it may be unable to continue as a going concern. The company had a number of problems. First, Fisker Automotive didn't ramp up production as quickly as A123 had expected. Second, the battery pack flaws mentioned above led to huge expenses as the company went through a few rounds of recalls. While A123's management was able to point to over-dependence on a single customer, Fisker Automotive, their own manufacturing defects led to $55 million of expenses that blew a hole in A123's financial status.

By November 2012, it was clear that A123's bankruptcy process had stalled production of the Fisker Karma. To compound this problem, Hurricane Sandy flooded a car storage yard in New Jersey rendering useless & destroyed thousands of newly manufactured cars in storage awaiting distribution. Among those were a few hundred Fisker Karma's. Months of being unable to manufacture and sell cars has taken a toll on Fisker Automotive's financial status.

By January 2013, news began circulating that Fisker Automotive was seeking suitors for a possible buyout or other financial assistance. In early February 2013, news was reported that Fisker had opened a bidding process to sell the company. Companies named as bidders include Dongfeng Motor Corp. based in Wuhan, China, and Zhejiang Geely Holding Group, owner of Volvo. The Geely group was seen as the most serious bidder.

After all this one might wonder at the stamina of someone who would stick with leading a company through so many struggles.