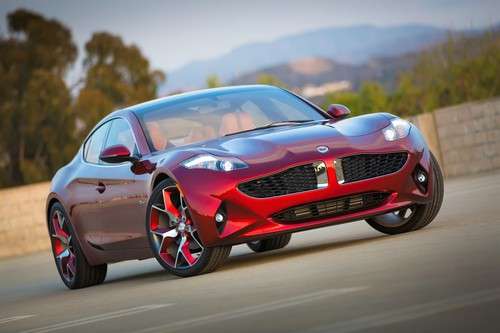 Fisker Automotive has reportedly opened bidding for a company to take over the struggling luxury plug-in hybrid electric automaker. Leading bidders appear to be Dongfeng Motor Corp. or Geely, the owner of Sweden's Volvo, depending on whose report you're reading.

Fisker designs and builds luxury sedans with a plug-in hybrid electric drive train. Their one car in production, the award-winning Fisker Karma, has been in a production halt for months due to the bankruptcy process of A123 Systems. That company ran into serious problems beginning in late 2011 when A123's manufacturing defects were disclosed. Fisker had their own problems, including a freezing of the Department of Energy loans after repeated delays in getting the Fisker Karma in production. The frozen part of the DoE loans was to have covered finalizing the Fisker Atlantic and get it into production at a former GM plant in Delaware.

As a result reports have gone around the last couple months about Fisker's management seeking some kind of rescue. Because the Fisker Karma production has been stalled, the company has been unable to sell cars, unable to bring in revenue, and it's plausibly likely that their financial status could be in trouble. Even though the company has raised over $1.2 billion in private investments.

Last Friday, Bloomberg News reported that Dongfeng Motor Corp. based in Wuhan, China, would gain 85 percent of Fisker under the terms of its bid. “The company has received detailed proposals from multiple parties in different continents, which are now being evaluated by the company and its advisers,” Roger Ormisher, a spokesman for Fisker, said in an e-mail. If Dongfeng wins the bid they may move Karma production to China.

On Monday however, Reuters reported that another Chinese automaker, Zhejiang Geely Holding Group, owner of Volvo, was the favored bidder. Reuters described Fisker's management as thinking Geely is more serious and passionate about Fisker and it's technology portfolio. Also, Geely's corporate structure will allow it to move more quickly than Dongfeng's multi-layered decision making structure.

Reportedly, while Fisker fielded bids from a wide range of countries, these two Chinese bids were the only firm offer. In both cases the offers are for a nearly complete buyout of Fisker Automotive. It's expected a part of the purchase will include commencement of repayment of the Dept. of Energy loans.

Any deal must involve a third player, Chinese autoparts maker Wanxiang Group. Wanxiang's American subsidiary bought A123 Systems in January, putting that company in the role of manufacturing the battery packs at the heart of Fiskers automobiles. In January, Crain's Chicago Business reported Wanxiang is looking to invest in Fisker Automotive but not to buy the company.

LG's New EV Battery Plant Is a Welcome News for Tesla
Tesla Giga Berlin's New Hurdle: It's Not Only the Gov't, but Now Tesla Itself
END_OF_DOCUMENT_TOKEN_TO_BE_REPLACED