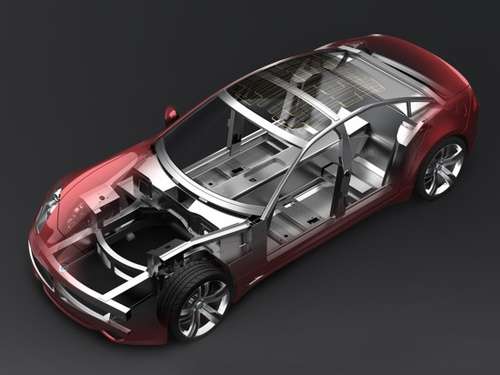 Henrik Fisker says production of the Fisker Karma is not dependent on Dept of Energy loans, and that the company is pursuing a "plan B" to fund the company independently from private investors to prevent the company from being a political football.
Advertisement

In early February, Fisker Automotive laid off a few workers following a suspension of the Dept of Energy loans to that company. This has touched off punditocratic furies likening Fisker's impending demise with last summer's sudden collapse of Solyndra, and predictions that when Fisker dies so too will lithium battery manufacturer A123 Systems, because of course the whole Obama green tech vision was a disaster from the start. But, wait, says Fisker spokesperson Roger Ormisher, this talk of Fisker's corporate death is overblown, and the DoE loan issue is just a bump in the road.

Fisker, launched in 2007 by famed car designer Henrik Fisker, recently launched their first car, a luxury plug-in hybrid named the Karma. Their second plug-in hybrid car, Project Nina, was to have gone into production later this year except for the "speed bump" in the form of the Dept of Energy loan suspension. Fisker received approval for up to $527 million of loans in the 2009 Department of Energy loan program that was meant to launch a U.S. electric car industry, and the company has pulled down $193 million from that loan while raising $850 million in private capital. The loan suspension was due to Fisker having missed business development milestones specified in the loan contract, and those missed milestones were responsible for the repeated delivery delays for the Karma. Because of the loan suspension, Fisker laid off 26 of the 100 workers refurbishing the GM plant in Delaware, and laid off another 40-45 workers at its California headquarters, and the company still employs hundreds of people.

Last week, Theodore O’Neill, an analyst with Wunderlich Securities who follows A123, told the Boston Globe that “Everyone that I’ve talked to is pretty certain that the DOE loan is not coming’’, and that the Obama Administration is politically "boxed in" by troubled loans, and that if the Dept of Energy loan to Fisker is not unfrozen “that croaks Fisker and that croaks A123.’’ Fisker Automotive is a major customer of A123 Systems, which obviously poses a risk to A123 Systems.

A123 is making sales elsewhere, such as in the smart grid energy storage. A123 also announced today a new battery product, the Military 6T Battery, an item which replace the current lead-acid 6T battery which currently sees sales of 300,000 units per year. In the meantime A123 has cut their revenue forecast, and laid off 300 workers since July 2011.

On the other hand, Fisker's spokespersons are downplaying the situation. Ormisher dismisses it as a bump in the road, however most of the remaining Dept of Energy loan was for the Nina and the success of Fisker is tied to whether the Nina succeeds.

Henrik Fisker is telling several news outlets that Fisker is working hard to free itself of dependency from the Department of Energy loans. Last week Henrik Fisker told TorqueNews that Karma production is well under-way, and is not dependent on Dept of Energy loans, and that the Nina is capable of paying for itself. AutoNews.com quotes him saying "We are in discussions for alternative financing. We don't want our future 100 percent reliant on DOE funding. It's been great to have. We just want to be sure we have capital without DOE."

Fisker has finished development of the Nina and have lined up 95% of the parts required to build the car. The next step for the company is retooling the plant in Delaware, the cost for which was to come from the Dept of Energy loan.

The Nina is "ready to build" says Henrik Fisker, the question is what's the funding source to go into production. He talked to TorqueNews last week about a "Plan B" that would generate the funding in case the company is unable to come to terms with the Dept of Energy. AutoNews.com goes on to quote him saying "There are so many ways of getting financing without selling equity. Before we put in these hundreds of millions of dollars, we need to know which partner we need to go with."

In January, the company did double the size of its series D financing round from $150 million to $300 million, of which they've already sold $244 million of stock with another $56 million to go. This indicates that the company can raise investment capital on its own and perhaps won't need the Dept of Energy loan. To do so would require finding enough investors to replace the $336 million balance on that loan, and possibly the expansion of the Series D financing round is the first step in this process.

Will Fisker croak? And will that croak A123? These possible events remain as an unknown future. While the $336 million Fisker Automotive expected to get from the Dept of Energy is a large chunk of change, the company has already raised over $800 million on its own and appears poised to raise the remainder on its own as well. Henrik Fisker clearly wants to be in charge of his own destiny rather than to be kicked around as a political football, and may prefer to forgo federal investment money in favor of private investors. If so it would be similar to last weeks move by Chrysler to withdraw their own request for low interest Dept of Energy loans, with a Chrysler spokesperson also citing restrictive terms in the government loan.