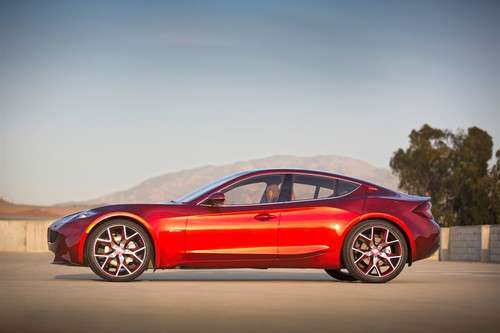 To facilitate finalizing the Fisker Atlantic design before production, Fisker Automotive is planning to open a technical center enabling work with components suppliers and others.
Advertisement

Fisker Automotive announced on Thursday plans to open a new Technical Center, probably in southern Michigan, to enable work on the Fisker Atlantic in preparation of manufacturing what will be the company's second luxury plug-in hybrid car. The Atlantic was due to have begun production in late 2012 (that is, right about "now") but that plan was thrown asunder when the Dept of Energy froze Fisker's loan program. Reading between the lines, the company still intends to manufacture the Atlantic in their factory in Delaware.

This will be the second time Fisker has opened a technical center in Michigan. The second, open from Fall 2008 through Spring 2010, was used for final development and engineering of the Fisker Karma. Unlike that center, this is envisioned as a permanent technical center allowing Fisker Automotive closer access to component suppliers and "low-emission technical expertise" in Michigan. “We brought the Fisker Karma to market in record time with the help of our previous Michigan Technical facility, and now is the time to open up a permanent Technical Center to support the final Atlantic development,” said Fisker Executive Chairman and Co-Founder Henrik Fisker.

The Atlantic was announced in April 2012 after years of secrecy behind the "Project Nina" code name. The company describes it as "a luxury four-door sports sedan with a practical interior" and is targeting "young families who want to drive a practical, low-emission, vehicle that also combines design flare, sports performance and premium engineering." It will use the second generation of Fisker's plug-in hybrid drive train design, or what the company calls "EVer (Electric Vehicle with extended range) technology". It has an electric motor driving the wheels, a battery pack, and a gasoline generator to keep the battery charged, while also allowing the battery pack to be recharged from the electrical grid. The range extender engine is a small BMW-sourced turbocharged 4-cylinder engine.

According to Fisker Automotive, a significant amount of the components on the vehicle have been designed, and that work at the technical center "will spearhead final product development, component readiness and production launch." The company told a similar story about readiness last Spring, but one wonders whether the company was truly ready to go into production in late-2012 as it was said at that time. During the Atlantic launch last Spring, Henrik Fisker (then still the CEO) said the Atlantic design was 90% complete and that the company is "totally ready" to kick off production. That production was to have started in late 2012 (now), but that they're still working on "component readiness" indicates the Atlantic simply wasn't ready for production.

When the Dept of Energy froze the Fisker loans program, it was because the company had repeatedly missed business and product development milestones. The deliveries of the Fisker Karma came a couple years after originally projected, with the company completely missing deadlines outlined in their loan agreement. The portion frozen by the DOE was to have supported development and manufacturing of the Fisker Atlantic.

The company says the new technical center location, in the Midwest, will not only facilitate work with component suppliers, but that it will be closer to "Fisker’s intended production facility for the Atlantic in Delaware." A question has been rumbling around since Fisker laid off workers at the plant in Delaware, did the company still intend to use that facility or to manufacture the Atlantic elsewhere. This is a pretty clear sign the company still plans to use the Delaware factory. Maybe.

In the meantime they are "in the process of evaluating different locations in the Midwest area" and expect to make further announcements in January 2013 or later.