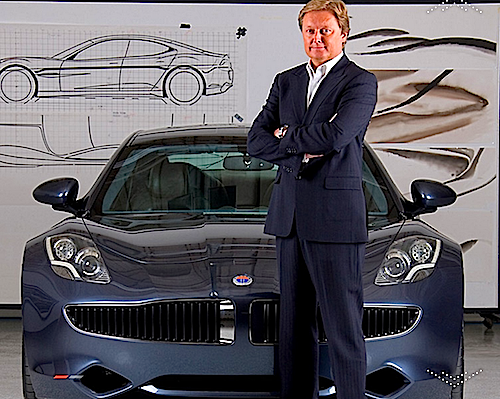 Is There Life For Fisker Automotive After Henrik Fisker Walks Away?

Fisker Automotives has already delivered a stunning plug-in hybrid and considering it a first generation vehicle, it strikes a very high introduction note. I drove it and felt this was one very good first time car for a startup. Yet none of it would have happened without the visioning and talented designer, Henrik Fisker. The automobile world is ruthless and has rarely been tender to startups. Unfortunately, as with most new companies, Fisker Automotives ran into growing pains and problems.

Henrik Fisker. To understand Fisker Automotives, you would nee to understand Henrik Fisker. He worked as a designer at BMW's advanced design studio in Munich on the Z07 concept car, as well as the exterior of the production BMW Z8 roadster. He joined Ford as Design Director working with Aston Martin and finally started his southern California company Fisker Coachbuild where he finally could do what every designer dreams of, creating his own car. And yes, there was a quick stint at Tesla Motors where he performed initial design on the electric car Tesla Model S. Now you know why there is a slight sense of family resemblance. Nonetheless, both Karma and Model S look as if Maserati and Aston Martin had an affair. Using Quantum Technologies’s platform, Henrik Fisker was free to create, design and eventually produce the car.

Henrik Quits. What is a company without its visionary founder? Again, if we look at the recent Tesla Motors’ past and more precisely the Musk vs Eberhart, reasonably the same thing is probably happening with Fisker Automotives. On the one hand you must have the highly frustrated Henrik Fisker pushing his ideas and visions to a company’s reluctant board still stinging from the past year’s worth of problems and negative news.

Will there be life after Henrik walks out of Fisker? It wouldn’t be the first time nor the last a founder slams the door on his or her company. In this case, after all the company could intelligently create an alternative energy vehicle consulting group to quickly diversify. Tesla has already done this and CODA already is three different companies. Fisker Automotive absolutely needs extra baskets if it wants to survive, consulting makes sense.

Is Henrik Fisker the scapegoat in the story? We will probably only know years from now but seeing how Bernard Eberhart gracefully slipped out of the limelight after a bitter ownership dispute with Musk, we can see Tesla Motors is doing well. As I mentioned three years ago, Fisker Automotive should have an alternative energy propulsion system consulting group and today, more than ever diversify as quickly as possible before things go too far. As to Henrik Fisker, we can be sure he will one way or another produce other beautiful cars and we can only hope the Atlantic.