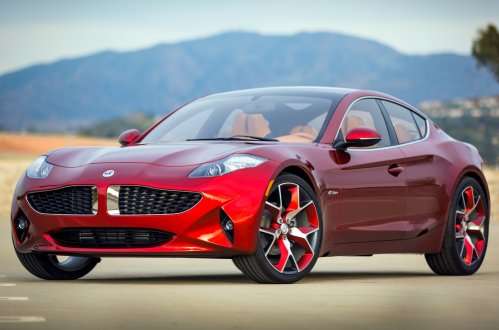 Fisker Automotive announced today that current Chief Executive Officer Tom LaSorda would be stepping down and in his place is former General Motors leader of Global Electric Vehicle development Tony Posawatz – one of the key individuals at GM responsible for seeing the Chevrolet Volt from concept to production.
Advertisement

Tony Posawatz has over 30 years of experience in the automotive areas of product development, program management and manufacturing (among other things) while working with General Motors with his most well-known project with GM being the Chevrolet Volt – a vehicle which packs a similar electric drivetrain with range extending capacities to that found in the Fisker Karma. Posawatz was instrumental in every stage of the Chevy Volt program from concept to production and based on the success of the Volt – there is no question that Posawatz knows a thing or two about helping a electric vehicle flourish in the US market. This is also the man behind the term “range anxiety”.

"We are delighted to be adding an executive of Tony's caliber to the Fisker Automotive leadership team," said Executive Chairman and Co-Founder, Henrik Fisker. "His depth of knowledge and experience in this innovative field of new technology means that he is one of the world's most experienced leaders in vehicle electrification technology and the plug-in ecosystem. In the long-term he will ensure that Fisker is well positioned to maximize the potential of not only the Karma sedan, but also bring the Fisker Atlantic smoothly to market."

Tom LaSorda, who was named the new CEO of Fisker Automotive in February of this year has stepped down to make way for Posawatz after just over a half year of service at the helm of the luxury EV builder. LaSorda states that when he took the position of CEO of Fisker, one of his responsibilities was to find a long-term leader for the budding electric vehicle company. "Tony is the perfect CEO for Fisker," said LaSorda. "He has been at the forefront of the industry's technological revolution and one of the few people in the world to bring an EV to mass production. Part of my assignment at Fisker was to recruit a long-term CEO and I cannot think of a better person than Tony to take us forward. He is a real product guy for a product driven company.”

The Fisker Karma has become a popular choice for those deep pocketed celebrities who want a combination of high performance driving and emission free mileage. Like the Volt, the Karma is powered by an electric drivetrain while a turbocharged gasoline engine serves as a generator to help keep the batteries well charged. The key difference is that the Karma offers vastly better performance and less range – while also packing a price tag well into the $100k range. Because of that price, the Fisker Karma is more commonly seen in a garage next to a Lamborghini than a minivan but with the upcoming Fisker Atlantic (shown above on the right) – the young automaker hopes to have a car that will reach a far greater number of consumers. In addition to being smaller than the Karma, the Atlantic is expected to offer slightly less power and slightly more driving range but most importantly, the Atlantic will likely come with a price tag that is a little easier for the average consumer to accept.

The transition of the Fisker Atlantic from concept to production will be among the main focuses of new CEO Tony Posawatz along with other normal activities of a man in that position. Posawatz will also be instrumental in launching future vehicles which could include the likes of the Sunset convertible and the Surf shooting brake - both of which will be based on the popular Karma sedan.

After stepping down as the CEO of Fisker Automotive, Tom LaSorda will continue working with the company as a corporate advisor.