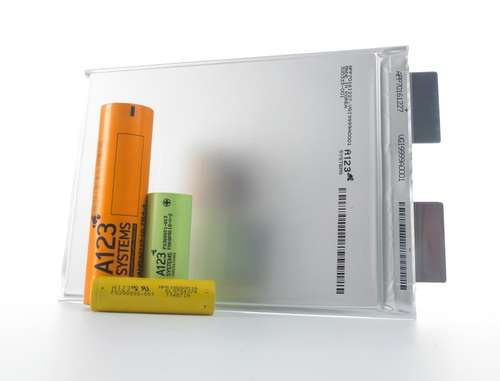 A123 Systems on roller coaster ride between Fisker, Tata and SAIC

Startup lithium battery manufacturer A123 Systems is in a rocky period, between troubles at Fisker Automotive, and new deals with Tata and SAIC, the largest automakers in India and China respectively.
Advertisement

A123 Systems is on a roller coaster of a ride right now. The company has announced several new deals in recent weeks, but any good news is overshadowed by its troubled major customer, Fisker Automotive. It's appears so bad that some are asking whether this is the end for A123 Systems.

Today A123 Systems and SAIC Motor, the largest automaker in China, announced a deal to expand the partnership between the two companies, part of which is to explore building a manufacturing facility in China for A123's batteries. The factory is expected to serve the local market (China), and should "cost advantage for A123's technology in the Chinese market." A123 already supplies battery packs for three of four electric vehicles built by SAIC.

Yesterday the company announced it would supply complete battery packs to Tata Motors, the largest automaker in India. In this case the batteries are intended for use in "multiple powertrain architectures" to be implemented in "a wide variety of commercial vehicles." Dr. Timothy Leverton, Head - Advanced and Product Engineering at Tata Motors said "We consider hybridization to be an integral component of Tata Motor's overall strategy, and hybridization of our commercial vehicles is particularly important to our global customers for reducing the emissions and increasing fuel efficiency of their fleets."

These two deals add to other good news including deals to supply batteries to several other automakers, as well as for grid energy storage deployments. However, hanging over this is news about Fisker Automotive, a company that is both A123's biggest customer as well as an investment by A123 in Fisker's business. In some respects the news between A123 Systems and Fisker Automotive has eerie parallels to the news between Ener1, its subsidiary EnerDel, and that companies formerly largest customer, Think Global. It is those parallels which have some pondering whether A123 is also headed for bankruptcy, a process that Ener1 is currently undergoing.

Fisker Automotive is designing a line of luxury plug-in hybrid sedans, the first of which, the Karma, is already on sale. That company has seen repeated delays in getting production and sales underway, and only just began shipping cars to customers last summer.

A month ago Fisker announced a small layoff due to loans from the Dept of Energy being frozen. In turn this was due to Fisker's repeated delays in getting to production of not only the Karma but the Nina sedan that was to be built at a former GM factory in Delaware that's currently under renovations. A couple weeks ago Henrik Fisker told several news outlets that this was just a bump in the road, that Fisker wasn't comfortable with the Dept of Energy loan program, and that the company is seeking independence from the loan terms through further private investment instead. However the latest news is that Henrik Fisker has been replaced as CEO by former Chrysler CEO Tom LaSorda. Henrik Fisker will continue with the company in the role of Executive Chairman responsible for global expansion and design strategy.

In the meantime A123 Systems yesterday laid a bombshell in their pre-announcement of quarterly results, that the company was writing down $11.6 million to its existing investment in Fisker Automotive and that A123 had "elected not to participate in a subsequent round of financing for Fisker." Typically early stage investors participate in each investment round to ensure maintaining their ownership stake, but the combination of writing down their Fisker investment and sitting out this investment round means A123's stake in Fisker is dwindling. Additionally A123's pre-announcement declared "additional warranty charges of $10.6 million" related to in part to the flaws found by Fisker Automotive in battery packs supplied by A123 Systems. Those flaws led to last December's recall of the Fisker Karma.

A123 also announced the company would be late filing financial results for 2011. Net loss for the fourth quarter is expected to be $85 million on revenue of $40 million, and in 2012 the company expect significant revenue growth. The company is seeking to diversify more strongly into grid energy storage systems, with significant revenue growth in that market. A123 has also set a strategic goal that "no single customer is expected to represent more than 15% of revenue in 2012" presumably so that the corporate fate is not dictated by the fate of their largest customer.

In short A123 Systems is in a difficult period of its existence. It's investment in Fisker Automotive is turning sour, and costing the company a significant chunk of revenue in the last quarter. At the same time new deals with Tata and SAIC signal good things for the future, as does continued expansion of their grid energy storage business. Diversifying both the markets and customer base should make for more stable financial conditions. It's too early to say whether we should write off A123, if only because the company is nowhere near running out of cash.

Frank Sherosky wrote on March 3, 2012 - 12:24am Permalink
Good report. I simply find it amazing that we continue to accept this nonsense that ultra-high cost EVs will somehow, one day reduce in cost to the point where every man, woman and child can own one. Any other time we snipe at trickle-down economics; but here we are, touting and praising its benefits. Fact is, government subsidies with taxpayer money cannot compete with today's market forces; and that force is us. The economy and the avarage wage earners who live within it simply cannot afford the cost. Instead of trying to meet the needs of the many, we have been fed a line that meeting the needs of the few wealthy who can actually afford BMWs will somehow give the tech a boost and bring costs down. What a joke! With all respect to Volt technology, this is not the first time that GM has botched a marketed vehicle. Recall the Chevy SSR, a great two-seat truck with a $40K price tag. It was the few good men that bought it, though. If GM had set a price that everyone could afford, they would have sold out to every male over 40 for sure; and I would have been one of them. The Volt propulsion is indeed a gem of an achievment in such a short time, but the Prius is kicking its ass in sales. And putting a marketing hat on, any product planner with any brains would not have touted the Volt for the masses as GM and the government has. Furthermore, the battery technology using lithium is just too expensive for the masses; it's super heavy and rife with serious design backups just to ensure it remains safe. The development money would have been better spent toward a lightweight body structure first. Then any small hybrid combo even with with a zinc-air battery, or a nat-gas or a small displacement ICE like Ford's 1.0 liter EcoBoost combo would have made this more affordable and thus more acceptabe to greater sales; and the MPG would have made a greater impact simply because so many more people would be driving it. The only way those Li-ion batteries can come down in price is if they build them with cheap Chinese or Indian labor. And that's what's likely to happen, unless we develop in mass a battery tech like zinc-air which has greater power density at a lower price per Kwh. In the meantime, ICE tech will prevail simply due to manufacturing economics.

Tsingshan's Threat to Tesla: EV Maker Is In Battery Crosshairs
Tesla-Funded Research Reveals One of The Biggest Mysteries of EV Battery
END_OF_DOCUMENT_TOKEN_TO_BE_REPLACED