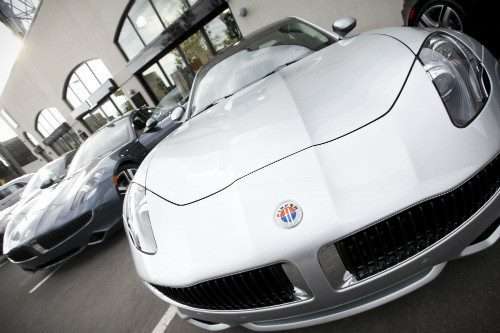 Fisker of Montreal opened this week continuing the expansion of Fisker dealerships around the world, that now numbers 79 dealerships.
Advertisement

On Monday, Fisker Automotive announced the company had signed an agreement to open Fisker of Montreal. The new dealership was formed in collaboration with one of the largest retailer groups in Canada, the Holand Automotive Group, and Groupe Park Avenue.

The showroom at 5150 DeSorel opened to the public on June 5th, ahead of the Montreal Grand Prix.

Fisker of Montreal raises to 79 the number of Fisker Automotive dealerships around the world. Of those, 47 are in North America. The remainder are in Europe, and new dealerships are expected to open soon in China and the Middle East.

“Fisker of Montreal was created by two of the most successful premium auto retailers in the world,” said Matthew Malfitano, Director of North American Operations at Fisker Automotive. “The long-standing reputations of Holand Automotive and Groupe Park Avenue give eco-minded luxury car buyers the confidence to share in Fisker’s vision. We look forward to a very fruitful relationship.”

Mr. Bitton, president and CEO of Fisker of Montreal, said, “This new Fisker brand will fit perfectly within our premium brand portfolio. With its elegance and green power, Fisker will add a new level of diversity to the range of vehicles already available in our prestigious dealership. It is a source of pride for us to be the first and only group to offer this innovative brand in Quebec, a brand that will make heads turn while taking a proactive stance towards reducing greenhouse gas emissions.”

The Fisker Karma is a luxury plug-in hybrid electric vehicle (again, Fisker uses the phrase "luxury Electric Vehicle with extended range") with a 50 mile electric-only range. It's top speed is limited to 125 miles/hr, and does 0-60 miles/hr in 6.3 seconds. It has luxury features galore, with an emphasis on using recycled materials wherever possible.

The Karma was designed by famed car designer Henrik Fisker, and it has the looks to make grown men drool. Unsurprisingly Fisker recently won First Prize in the prestigious International Design Awards, and the Edison Awards recognized the car with a Silver Trophy in electric vehicles.

The company has recently been put on a death watch by naysayers engaging in a hype fest, which led Fiskers management to recently release a "business update" explaining the company's financial status, efforts to raise investment capital, and essentially claim the company isn't about to croak. However, bravado aside, the Dept. of Energy loan program with which Fisker was to launch production of the Atlantic have been frozen. The company has not announced what effect that will have on the previously announced plan to begin manufacturing that car later this year and begin delivering the Atlantic to customers in 2013. Recently leaked internal Fisker documents say the Atlantic launch will slip until 2014 All of which is to say that Fisker of Montreal, and other Fisker dealerships, will be carrying only the Karma for the time being.

In the recent business update the company cited $100 million in revenue during the first four months of 2012, strong demand for the Karma, and plans to expand the dealership network into the Middle East as proof that the company is in good condition. To now expand into Montreal underscores that picture of an expanding company with healthy finances and a popular product to sell.

Tesla Giga Berlin's New Hurdle: It's Not Only the Gov't, but Now Tesla Itself
Teslas Are Sold Out Until 2023, But The Timing May Reverse
END_OF_DOCUMENT_TOKEN_TO_BE_REPLACED