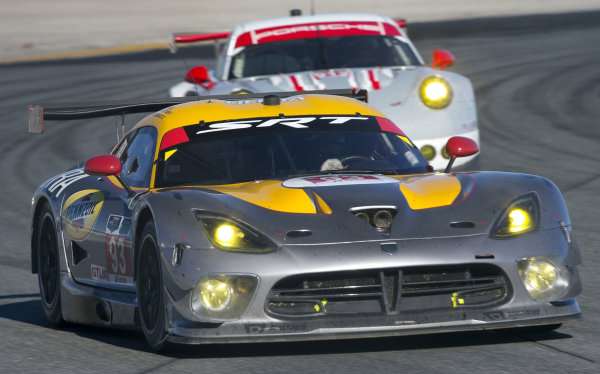 For the second time in the 2014 Tudor United Sports Car Championship, an SRT Viper GTS-R finished on the podium as the #93 Viper finished 2nd in the GTLM class at the 12 Hours of Sebring race – also beating the Corvette Racing program for the second in two races.
Advertisement

The two SRT Viper GTS-R teams had to have headed into the 2014 12 Hours of Sebring race feeling pretty good about their chances. The Vipers both looked very strong at the Rolex 24 at Daytona International Speedway and the only Viper in attendance at the Sebring Winter Testing was one of the quicker cars in that practice field.

However, the early practice sessions last week and the qualifying round surely didn’t go as planned for the SRT teams – as they were among the slower cars in practice and could only muster modest qualifying positions of 8th and 10th in the 11 car GTLM field. Based on that, things weren’t looking quite as bright for the SRT teams, but that all changed come race day.

Although both of the SRT Viper GTS-R cars started towards the back of the GTLM class field, they both worked their way forward and spent time leading the class during the 12 hour Sebring race. Dominic Farnbacher spent time leading the GTLM class with the #91 Viper, but when Ryan Hunter-Reay was driving the #91 car later in the race, a spin in turn 17 sent the Mopar supercar into the tire barrier backwards. The team scrambled to get the 91 car fixed and back on the track, but it was four laps down after the rear end repairs. The 91 Viper was able to make up two of those four laps, but that was only good enough to secure a 7th place class finish, 18th overall.

The #93 SRT Viper GTS-R also had a strong run throughout the day and without the spin that took the 91 Viper behind the wall for repairs, the yellow and silver Viper piloted by Jonathan Bomarito, Kuno Wittmer and Rob Bell was able to bring home a 2nd place GTLM class finish. With Jonathan Bomarito at the wheel, the #93 Viper was leading with an hour left in the race and it appeared as though the Viper could cruise to victory. Unfortunately for the SRT teams and their fans, a caution with about 50 minutes left bunched the field up for a restart.

Prior to the restart, the vast majority of the GTLM cars headed into the pits for their final stop, but the #912 Porsche 911 had pitted shortly before the caution and that car did not need to pit during the final caution. That allowed the Porsche to obtain the GTLM lead and while Bomarito was rapidly closing ground on the Porsche, the Viper team ran out of time in its quest for the win. In fact, Bomarito was cutting roughly a second a lap off of the lead in the final minutes of the race while turning in some of the fastest laps of the race, but they ended up losing to the Porsche by just under 6 seconds.

The SRT Viper GTS-R teams didn’t get the wins that they had wanted, but they were able to once again beat out their cross-town rivals from General Motors. For the second race in a row, Viper drivers stood on the GTLM class podium while Corvette drivers could only watch from the crowd. The biggest piece of bragging rights will come when one of the Detroit-based GTLM race cars brings home the win, but Dodge and SRT racing fans are most certainly pleased with the fact that the Viper has topped the Vette in the first two Tudor endurance races of 2014.

The Vipers, Corvettes and the rest of the GTLM class will be back in action on April 14th when they take on the Long Beach Grand Prix.