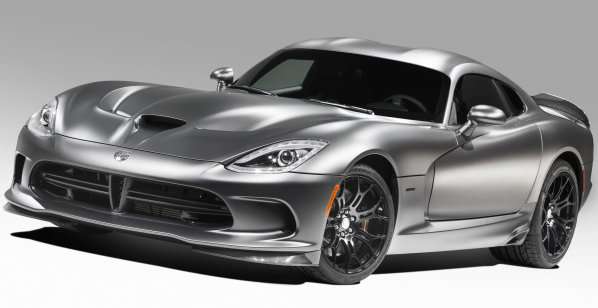 When the SRT Viper Time Attack model was introduced last year, it built specifically onto the “base model” SRT Viper, but the Chrysler Group announced today that the new Time Attack Group for the Anodized Carbon Special Edition Package will bring some of the enhancements of the Viper TA to the Viper GTS in the stunning matte black paint.
Advertisement

The SRT Viper Time Attack model was introduced as the best performing of the modern Viper lineup, with every go-fast goodie possible affixed to the base model SRT Viper. Most notably, the Viper TA did without any luxuries from the Viper GTS that are not needed to make the Mopar supercar any faster and as a result, the Viper TA was able to turn out quicker lap times than the pricier Viper GTS.

The Time Attack Group for the SRT Viper GTS takes all of the chassis and aerodynamic features of the Viper TA and applies them to the normal features of the range topping Viper GTS. This begins with a set of carbon fiber two piece front corner splitters and a carbon fiber decklid spoiler which work together to build 339 pounds of downforce at 150 miles per hour. Next, the suspension is upgraded with solid front and rear sway bars, a specially tuned dual mode Bilstein Damptronic damper system featuring unique spring rates, a firmer programming setup for the Street and Race modes and matte black lightweight forged-aluminum Sidewinder wheels wrapped in Pirelli P Zero Corsa tires.

These components all work together to afford the Time Attack equipped GTS Vipers incredible handling while a massive Brembo brake package with two piece rotors will get the Viper stopped like few cars in the world.

“Combining the Time Attack Group with the Anodized Carbon makes for a pretty special and unique car,” says Jeff Reece, Viper Vehicle Integration Engineer. “We tuned it in the wind tunnel to achieve the proper aero balance and provide the customer added grip on the race track. Bottom line, the Time Attack Group provides more grip.”

Unlike the SRT Viper TA which features lightweight cloth seats, the Time Attack Group for the Viper GTS takes a far more luxurious approach in the Annodized Carbon Edition, including dark Alcantara from top to bottom with orange stitching on the seats, steering wheel, headliner and dash pads.

“Bringing the Anodized Carbon and the Time Attack track performance package together pairs two special-edition vehicles and results in an even more special SRT Viper for buyers,” says Graham Henckel, Chief Engineer, SRT Viper. “The matte paint has a sinister look, and putting the Time Attack package on just makes the vehicle look that much more menacing. It’s the most sinister looking Gen V car we have built and looks great.”

The Time Attack Group will first be offered on the Anodized Carbon Edition Viper GTS units #41 through 50, but we would expect to see the package offered for Viper GTS coupes of other colors in the near future as the SRT Group looks to offer everything that every customer wants on their high priced Mopar supercar.